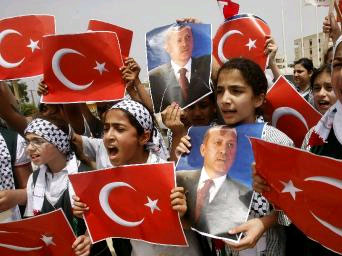 Turkey’s vibrant democracy is an inspiration to Arab countries throwing off their autocratic yoke and their Western patrons.

Turkey’s ruling Justice and Development Party’s (AKP) renewed mandate puts the electoral seal of approval on its shift towards the Middle East, even as its importance to Europe increases. Now Turkey itself is being courted by both NATO countries and, increasingly, the Arab world.

Turkey was for centuries the crossroads of East and West, but reduced to a shadow of itself in the twentieth century. A century of European and US inspired intrigue dismembered the Ottoman Caliphate, inserted a Western-inspired Jewish state into the heart of the Arab world, and cut Turkish political and social life off from its Arab roots. The end of the Cold War should have brought the Turkish and Arab peoples back to their “natural” relations, and Turkey to its geopolitical importance, but the West prevented this, supporting the Cold War dictatorial status quo in the region dominated by a combative Israel.

The revolutions in the Arab world have now vaulted Turkey into a key role in the region. But this is merely Turkey returning it to its natural roots. “The wave of revolutions in the Arab world was spontaneous. But it also had to happen to restore the natural flow of history,” said Turkish Foreign Minister Ahmet Davutoglu at the Leaders of Change Summit in Istanbul in March.

Throughout the Arab spring, Turkey has shown that it is more in tune with regional needs than Europe and the US. The overthrow of Tunisia’s Zein Al-Abidine bin Ali and Egypt’s Mubarak, close US allies, was greeted with alarm in Washington but with joy in Ankara. Elsewhere, the “Arab spring” has been more complex, and Turkey’s response confirms its new assertiveness, independent of its NATO allies.

In all the Arab countries now experiencing unrest and change, the West is concerned first of all with maintaining its interests in the region — financial, economic and political. Having “lost” Mubarak, US President Barack Obama and the G8 “generously” offered to exchange the new Egypt’s debilitating debt — incurred under Mubarak — for greater Western control of Egyptian industry, surely a devil’s pact. The US has put great pressure on the Egyptian army to maintain the peace accord with Israel, despite a majority of Egyptians wanting it cancelled immediately.

The West’s goal in both Libya and Syria has been to get rid of the anti-empire pests and open the countries to Western influence, even at the risk of destabilising those countries. While the West did not call for the Tunisian and Egyptian dictators to flee the palace, it has loudly demanded that Gaddafi and Al-Assad resign, aggressively bombing the former and demanding sanctions against the latter. However, just as Western enthusiasm for Mubarak and Ben Ali helped seal their fates, active Western backing for the opposition in Syria and Libya has actually given rise to dissent within the opposition and helped to buttress support for the existing regimes. While repressive, they at least left their subjects with a sense of resisting imperial encroachment. 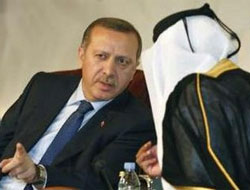 Without any imperial baggage, Turkey’s response to the new Egypt and Tunisia has been advice and assistance with no strings attached. Given the complexity of the uprisings in Libya and Syria, its response to the conflicts there has been more measured, calling for negotiations, reforms and de-escalation of violence, to allow the countries to maintain their territorial integrity and rebuild without outside interference.

Turkey’s membership in NATO places it in a key position to influence the West’s continued plans for the region. As it increasingly asserts its independence under the AKP, beginning with the refusal to condone the US invasion of Iraq and continuing with the refusal to condone Israel’s colonisation of Palestine, as a NATO member in good standing its voice of reason is not being heard from the sidelines, but from the very corridors of imperial power. This gives the more assertive Turkey a new prominence in Western strategic thinking, and puts great responsibility on the shoulders of the Turkish leadership. With the AKP’s popular mandate renewed, the world can expect a continuation of a reasoned and independent foreign policy from the AKP — one with clout.

There are complex and dangerous trials awaiting Turkey. The illegal war waged against Libya is bogged down; Turkish-Russian-African Union demands for negotiations will continue and hopefully bear fruit. The ongoing unrest in Syria is a worry which requires firmness, intelligence and patience.

Israeli intransigence and recklessness are great challenges to Turkey, with the second Freedom Flotilla to break the siege of Gaza departing from Turkey soon. Israel is desperately lobbying Western powers and Turkey to stop the flotilla, clearly worried that if the Israeli Defense Force repeats last year’s massacre on the high seas, it will merely hasten the demise of the country it purports to defend, as the world turns resolutely against it.

Israeli Foreign Minister Avigdor Lieberman has expressed fears about Egypt’s Muslim Brotherhood “undermining the peace treaty” which 85 per cent of Israelis approve of. But he need not fear war. While Egyptians have no love for Israel, none contemplate yet another war against what is clearly a more powerful and ruthless neighbor.

What Lieberman needs to fear is Turkey’s calm, principled stance, buttressing the new Egypt as it learns how to walk again. Davutoglu says the US’s “one-sided” approach to the Middle East is not the path to solving the problems and easing the tensions, and that “Israel needs to be treated like any other ordinary country in the region.” These are welcomed words to Egyptians and allow the new Egypt to join Turkey in pressuring the Western interloper in their midst into joining the Middle East as an equal partner not as the region’s hegemony.

Turkey’s own democracy is a heated affair, as protests by and imprisonment of journalists in connection with the so-called Ergenekon military plot to overthrow the government continue. Whatever the outcome of this stand-off between the government and its civil society critics, the demonstrations and the openness of the Turkish press cannot be denied.

When the history of this period is written, imperial schemes in the region will require a chapter to be devoted to Turkey, just as chapters will be devoted to the Arab countries. To achieve a meaningful peace in the Middle East, there must be an end to foreign manipulation. Relations between countries must be based not on pressure, intrigues and invasion, but on dignity and respect. That was Erdogan’s subtext during his victory speech when he said, “The Middle East, the Caucasus and the Balkans have won, just as Turkey has won.”

Eric Walberg writes for Al-Ahram Weekly. You can reach him at http://ericwalberg.com/ His book, Postmodern Imperialism: Geopolitics and the Great Games, can be ordered at http://www.claritypress.com/Walberg.html