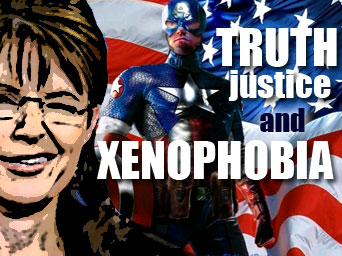 Hanan is the Islamophobic Lebanese woman, Hanan Qahwaji who as a child lived in the South Lebanon village of Maryoun overlooking the Lebanon-Palestine border during three years of the on again off again Lebanese Civil War before she became an Israeli collaborator and fled to Israel. Hanan, repackaged as “Rachael”, soon quickly landed a job with Israeli TV and specialized in telling stories about how Muslims terrorized her and her Christian neighbors.

Later, repackaged as “Nour Semaan”, a name she still sometimes uses, Hanan tells American audiences that she became a Middle East “anchor” in Israel. Forgetting to mention that her job was with Pat Robertson’s, Christian Broadcasting Network, working to spread his politically conservative, Pentecostal faith in the Middle East which includes Robertson’s vision of rapture and how righteous Jews will all convert when Jesus comes again. The others will burn in Hell according to the Pentecosts.

Hanan is sometimes known as, Nour Semaan, Rachael Cohen, “Dark Angel” and more recently, Bridgitte Gabriel, founder of the anti-Islam Zionist hate group “Act! For America” and author of “They Must Be Stopped: Why We Must Defeat Radical Islam and How We Can Do It“.

Peter, would be US Congressman Peter T. King, the Republican Islamaphobe from Long Island, NY, who as Hanan’s new partner in saving America from Islam.  She sometimes flirtatiously refers to simply as “Petey” or “Petey Chops.”

It’s unknown to this observer whether the couple experienced a vrai French “coup de foudre” when Mr. King was Hanan Qahwaji’s first guest earlier this year on a new cable television show that she co-hosts with Guy Rodgers, a Republican consultant who helped expand the Christian Coalition, which used to be a potent political organization on the Christian right and who is ACT’s Executive Director. However, “Petey” and “Bridge” as he calls her sometimes, certainly appear to see potential in one another for saving America from the Muslim hoards, which according to the duo are now in all American neighborhoods and who have infiltrated the FBI, the CIA, the State Department and the White House!

The new team is said by one King staffer to share a vision of “defeating Radical Islam in America and defeating it before it’s too late.” And they intend to show their fellow Americans just how to do it.

This past week in Washington, King held the second of what it planned as a series of “Congressional Hearings” designed to warn Americans about various threats from Muslims in their midst.

Gabriel frequently tells interviewers that “[F]or my first ten years I led a charmed and privileged life. All that came to an end when a jihadist religious war, declared by the Muslims against the Christians, […] tore my country and my life apart. It was a war that the world did not understand.”

What is obvious to the many Lebanese who view Hanan with contempt for misrepresenting and besmirching their country (not to mention her open letter to Israel during the July 2006 war, which she read frequently on TV shows urging Israel to keep bombing Lebanon despite their already killing of more than 1,300 civilians is that it was a war that Gabriel did not understand.

The on again, off again intermittent civil war was not characterized by anything remotely resembling a Muslim “Jihad”. Some Muslims actually fought with Israel and with the Christian Militia. Moreover, the Palestinian organizations were secular nationalists and not remotely Jihadists; plus many were also Christians, while other fighters were communists, Nasserites, and non-religious westerners. Although many combatants were Muslim, perhaps 35% were not. And their fight was with Israel; it was not a religious crusade against Christians. Gabriel’s fundraising speeches among largely uniformed right wing Republican audiences in which she claims she was the target of a religious crusade against Christians is patent nonsense.

“Watching the World Trade Center buildings fall in 2001,” Hanan tells audiences, “I was struck by the same fear that I experienced during the war in Lebanon. As I watched, words instinctively came from my mouth as I spoke to the TV screen: ‘Now they are here.” Gabriel is well aware, as Michael Young of Beirut’s Daily Star has pointed out, that there was nothing remotely comparable between what happened in New York, Washington and Pennsylvania, and what she experienced in Marjayoun.

Bridgitte is said to believe that she can help King from deflecting rising criticism of his “hearings” given her own experience with hecklers as she tours the American heartland sounding the alarm.

She is said to resemble a Sarah Palin “mama grisly” when she senses danger to those she cares about and no sooner than King’s hearing began last week than ACT! pounced with Tweets from the Congressional Hearing Room.

An ACT! staffer twittered live labeling it: “Round 2: House Homeland Security Committee Hearing on The Threat of Muslim-American Radicalization in U.S. Prisons:

“As I watched the discussion during the hearing, I Tweeted about so that our ACT! for America members could see right away what Members of the U.S. Congress are saying and doing about it. While there certainly were not as many “rabble rousers” as there had been for Chairman King’s first hearing on Muslim radicalization, there was some political drama, nonetheless.”

“For example, Rep. Laura Richardson (D-CA) falsely alleged that the focus of Chairman King’s hearing “can be deemed as racist and as discriminatory.” The Chairman immediately fired back by saying that “the purpose of this Committee is to combat Islamic terrorism because that is the terrorist threat to this country. Bravo!”

“In response to Rep. Dan Lungren (R-CA) commenting that “the political correctness in this room is astounding,” Rep. Shiela Jackson-Lee (D-TX) held up a copy of the Constitution replying that the document is where she finds her “version of political correctness.” She went on further to state that there is a parallel between Christian militants and jihadists when it comes to bringing down the Constitution. More nonsense.”

“Rep. Hansen Clarke (D-MI) ranted terribly on for several-minutes about the real problem being the overcrowding of prisons due to unfair sentencing guidelines and claimed that prisoners were turning to Islam to “protect themselves.”

Other witnesses who reportedly left Peter and Bridgette unhappy were:

According to ACTS! Tweets:

“Chief Downing repeatedly tried to distinguish “Islam” from what he referred to as “Prislam,” and said that all jihadis had “hijacked” the Islamic faith. As I listened to him, I wondered if he has taken the time to read sharia law, the Qur’an and the hadiths? If he did, I think he would understand that what the “radicalized” Muslims are adhering to is an ideology that is clearly enunciated within Islam’s holy books and has been practiced for 14 centuries. His statements reminded me that a great deal of educating at local, state and federal levels still needs to be done.” A few examples of questions from new Members that may have pleased Bridge and Petey were:

“Professor Useem made several amazingly naïve and plain stupid assertions, one of which was that “correctional leadership (at both the agency and prison-level) has consciously and successfully infused the mission of observing signs of inmate radicalization into organizational practices. Rather than being sitting ducks, waiting for their facilities to be penetrated by radicalizing groups, correctional leaders have fashioned, staffed, and energized the effort to defeat radicalization.”

“Action by our grassroots is the fuel that makes the ACT! For American engine run. As we wait for Chairman King’s third hearing on Islamic radicalization it’s really nice to see that the engine is roaring loud and strong.”

In perhaps a personal message of encouragement to the Chairman were the words: “Please keep it up for Round Three!”

One subject being considered for Round Three is: “How to spot an Islamic terrorist in your neighborhood”. An interesting subject since that’s one suggested title for Hanan’s (Bridgitte’s) next book featuring an introduction by none other than “Petey” King.

Franklin Lamb is doing research in Lebanon and is reachable c/o [email protected].