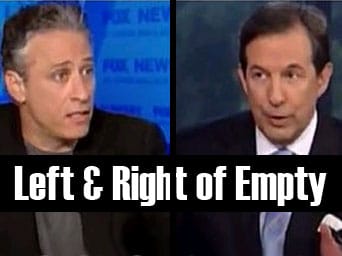 This Jockeying for Irrelevance

The recent interview of comedian Jon Stewart, perhaps America’s most respected news commentator, and Chris Wallace of Fox News, has become more news than the news.  I have to start by saying I am a fan of Stewart and, in the interviews below, he performed well.

Performed.  It was a performance and Stewart isn’t only good, he is intelligent, something Chris Wallace isn’t.  Stewart says that Fox News brought Wallace on for credibility.  Mike Wallace, Chris’ father, was credible.  He was at CBS during the Cronkite years when that meant something.

Chris is a lightweight at best, never more.

Stewart, he is a bird of a different feather.

The discussions, of bias in the news, both claiming they aren’t “mainstream,” belong on the Comedy Channel for sure.  Fox has always been where America’s reactionary “unwashed,” the uneducated or poorly educated, get their “fix” of race hatred, Islamophobia and rabid Zionism.

Fox is also where Judge Napolitano broke the 9/11 conspiracy wide open along with Geraldo Rivera.

Fox, owned by Israeli ultra-nationalist Rupert Murdoch, has had its hands dirty for a long time, little question about that, at least with anyone sane.  Calling much of their reporting “wild conspiracy theory” is reasonable.  That their theories are labeled “conservative” is misleading.  Fox has generally been little more than a propaganda outlet, a professional “disinformation” service crafted to serve a globalist agenda.  Their purpose has been to run interference for financial criminals and political extremists, totalitarian oligarchs in the US and to provide cover for Israeli war crimes.

They do little else.  This is the heart of Fox News and always has been.

Stewart, someone I share ethnicity with, as we are both Scots is at times brilliant.  What he also does is ignore the 900 pound gorilla in the room, 9/11.  Fox broke the 9/11 story, put it in the mainstream and has, ever since, tried to put it back.  Stewart could have had a field day with that one.  He chose not to.  Stewart seems to choose “not to do” a lot of things.  This makes Stewart a bigger hypocrite than Wallace.

When Stewart and Wallace talk about “marching orders” at Fox, perhaps Stewart gets “marching orders” too?  Did Wallace fail to mention it because they make come from the same place?  Ever hear Stewart talk about Gaza or Fox New’s continual persecution of the Palestinians?  Are Wallace and Stewart cut from that different a cloth?

A cursory examination easily shows Fox to be little more than an outlet for, not the GOP, but the CIA and Mossad, same as the Wall Street Journal, Guardian, BBC, New York Times, Washington Post, CNN, CBS, Wikileaks and so many others.

Is this an extreme statement?  Perhaps.  Is it true?  Of course.  Can I prove it?  Probably.  Do I need to?  You answer that.  Are you satisfied watching these groups pretend they are covering both sides of a story where, on every really key issue, they either cover nothing or say the exact same thing?

This circus is for folks who buy in on “left” and “right” controversy and don’t understand that global organized crime is the “super-government” and has been all along.

Stewart is an enigma.  He gets the crime part, we know that, but ignores and covers for much also.

This is what scared me.  Stewart is a smart guy.  I saw this.  He could have eaten Chris Wallace alive at any time.  Wallace is deeply flawed, anti-charismatic and hokey.  He is there, at Fox, to play for the “angry white guy” group, guys who played jump rope on the playground and spent too much time wearing an apron and baking cookies with mom.

Women don’t like men who like Fox.  It’s time we got that one out, no big secret to women, and it isn’t their ideas.

This is what it is all supposed to be about, “chatting up the babes” and bullying on the playground.

American culture has gotten no further and those addicted to news, be it “left” or “right” are obviously looking for a “fix” of some kind, something to replace something lacking in their “real world” selves.  As with the internet, watching TV news provides an alternative reality, an imaginary world where a rich life filled with delusion and paranoid fantasies can replace the nasty real world of crooked bankers and lawyers, of cowards and buffoons who make up the real political leaders of the world.

In real life, heroes might well be the Taliban.  Osama bin Laden might well be a George Washington.  (both have been dead for a very long time)

In real life, America is probably “the bad guys.”

We were in Vietnam, we are again.

In real life, buildings down dissolve and hundreds of firefighters don’t die of radiation sickness from drywall dust.  Oh, you haven’t heard that?

Were we to have too much “real life,” rigging elections might be impossible and what goes on in Washington and New York might be brought to a crashing halt.  Real people, living a real life, might just act, not just sit on the couch and whine.

On the couch, Muslims and Mexicans and “evil Negroes” seem a daunting enemy.  For so many, perhaps it is best, safest, to stay on the couch.