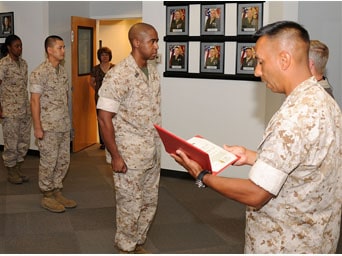 MARINE CORPS LOGISTICS BASE BARSTOW, Calif., June 22, 2011 – When Marine Corps Master Sgt. Lorenzo Lacy left for a six-month deployment with Marine Central Command in June 2010, he had a considerable task ahead of him.

The Las Vegas native was assigned as the G-4 supply chief for the forward-deployed elements of the 1st Marine Expeditionary Force, which meant his performance directly affected a large number of warfighters in Afghanistan.Lacy’s job was to coordinate and monitor logistics support requirements for all in-theater elements of the force, constantly observing and evaluating supplies and materials to deployed units.

The 39-year-old faced a number of logistical challenges during his deployment, which took him from Marcent headquarters at MacDill Air Force Base in Tampa, Fla., to Naval Support Activity Bahrain in the Middle East, but he was able to overcome them and accomplish his mission.

“Some of the challenges I faced were the long hours overseas and the varying timeframes between [the United States] and the Middle East,” he said. Maintaining liaison with Marine Corps Logistics Command, Marine Corps Systems Command and Headquarters Marine Corps, and keeping communications between the continental U.S. and the forward units in the fight was, he noted, “a constant battle.”

Though he was pleased to do his part in deploying overseas in support of Operation Enduring Freedom, Lacy said, he also found returning to his duties and Marines on base refreshing.

“This award means that I did my job efficiently and effectively while I was deployed, but I’m glad to be back as well,” he said. “I wanted to set the example for the young Marines here that senior Marines are not excluded from deployments and when called upon, we all have to do our part to help the warfighter.

“I always explain to my Marines to never take a job for granted and that everyone’s role has a purpose, no matter how large or how small,” he added.