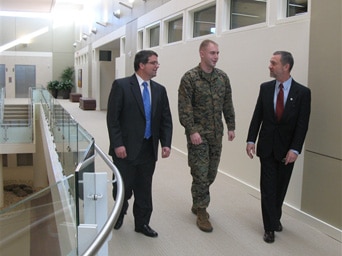 BETHESDA, Md., June 24, 2011 – A year after its ribbon-cutting ceremony, the National Intrepid Center of Excellence is making a difference in the lives of warfighters suffering traumatic brain injuries and psychological disorders, said Dr. James Kelly, the center’s director.

The facility, Kelly said, also is expanding the knowledge base about these signature wounds of war.The center has achieved numerous milestones since opening its doors — from receiving its first clinical patients in early October to becoming fully operational in March to recently achieving its goal of treating 20 patients on any given day, he said. In addition, it hosts regular sessions to help health care providers learn more about TBI and PTSD, and professional exchanges that draw some of the world’s leading experts in the field.

Looking back over the past year, Kelly reported progress in all three of the center’s main mission areas: not just providing clinical care to service members and their families, but also expanding the body of research about TBI and psychological disorders and sharing it with the broader medical community.

“We have done things that we could have not done any other place or time,” he said.

It all begins, he said, with the $65 million center, a gift from the Intrepid Fallen Heroes Fund that features the most-advanced equipment and facilities available to diagnose and treat TBI and other psychological disorders. Among its offerings is $10 million in imaging equipment that enables health care providers and researchers the rare ability to see inside the brain that less-advanced equipment can’t to formulate diagnoses and treatment plans.

“What happens here is that people come and look at this beautiful building, and they feel … that somebody is taking this seriously,” he said. “I think the service members and the families feel like we are taking them seriously.”

The center offers its staff the opportunity to create treatment programs tailored to their patients’ individual needs.

“It doesn’t have to be force-fit into existing structures,” Kelly said. “This is about the business of learning what’s new, what’s possible, taking the most-advanced work that is being done and rapidly bringing it in, and then moving out quickly … and making it work for others.”

“The idea of having all these different categories of professionals in the same place at the same time every day available to see these patients and their families simply isn’t done anywhere else — and certainly isn’t done in the way that people are trying to do it here,” he said.

It begins as soon as service members report for their two-and-a-half week treatment at the center. That first day, they and their family members sit at a table with six different health care providers to discuss their cases.

“They get to tell the story once instead of six times,” if they had to meet with the providers individually, Kelly said.

“To come here and tell their story once and get the feedback and exchange from six different professionals all at the same time is an efficiency and a comfort for that person,” Kelly said. “It’s something we have an opportunity here to try, and it is working.”

While at the center, service members and their families get 10 to 15 hours of education about what a traumatic brain injury is, how it has affected them and what they can expect going forward, Kelly explained.

Next up is the diagnostic work-up, with each discipline represented at the center conducting its own assessment to contribute to the team’s overall assessment.

Kelly said his staff comments regularly about the benefit of working together under one roof and being able to discuss details about the assessment or therapeutic approaches used.

“It’s not just a matter of conducting a treatment plan. We are actually doing the treatment,” he said. “It’s trying them out, creating this menu [of treatments] we have and presenting the menu to the service member.”

Patients then choose which treatments they think will work best for them and would like to try. “This is different,” Kelly said. “It’s ‘You engage with me in the discussion as to what your needs are and what kind of things you want done.'”

Some of the treatments extend beyond medications and physical therapies associated with traditional medicine. They include alternative medicine and holistic therapies such as meditation, reiki, yoga, acupuncture and heart math, a program to help regulate heart-rate variability.

Art therapy is another particularly promising offering. “Once they get into it, some of them have said, this is the most powerful thing that’s happened here,” Kelly said.

Kelly admits he’s been surprised at how receptive service members are to these alternative approaches. “These tough-as-nails military guys come in here and say, ‘I like that. That’s what worked,'” he said.

A year into the effort, Kelly said he’s excited by the progress patients have made. Many are proud that they’ve been able to reduce or eliminate their medications, get better control of their symptoms, reduce their anxiety, sleep better and handle stress when it occurs, he said.

Typically their treatment isn’t finished when they leave the center, but they’re on the road to a more positive outcome, he said.

“It’s kind of a springboard effect into where they are going,” Kelly said. “And the bottom line — which is what we are shooting for all along — is to give them hope that this is going to turn around. They come in oftentimes kind of worn out and they have lost hope that their lingering symptoms and problems are going to get better. And by the end of this, when they realize they are getting better, … they leave with hope that this is actually going to turn out okay.”

Military leaders, seeing these results, hope to export some of those lessons and make them available more broadly. There’s even talk of creating NICoE satellites or “mini-NICoEs,” based on the center’s model, that provide similar or follow-up care on military bases around the country, he said.

Meanwhile, Kelly emphasized that the National Intrepid Center of Excellence is a Defense Department institute with a charter that extends beyond clinical care.

“We do clinical care, but that is not the only reason we are here,” he said. “We are here to understand the problem better and to make advances and to roll those advances out.”

Much of the research is devoted to determining what made the difference in some of the patients treated at the center.

“So many people have said they have benefited in some way from coming here. Their symptoms are improved, they are back on track with some of their job performance abilities, their relationships have improved,” Kelly said. “Every individual’s outcome is a little bit different, but in those general categories of life — work, bodily symptoms and relationships — those things have shown improvements.”

“Our challenge is to figure out, ‘What made that happen?'” he said, or more appropriately, what combination of interdisciplinary approaches made the difference.

Getting to the bottom of that is a big thrust at the center, which is building on lessons learned as it reaches out to health care providers and experts across the military and civilian medical and research communities.

The center hosted its first educational forum the day after the ribbon-cutting and has hosted scores of conferences and high-level think-tank meetings during the past year, some including leading world experts.

“That’s what this is supposed to be,” Kelly said. “It is not just the hub for a network of what happens within the DOD. It also is a place to advance our understanding. And so we bring in the very people that know this stuff and have them teach each other and share that information in real time.”

Kelly said he feels fortunate to be able to help push the science in advancing understanding of the highly complex issues associated with TBI and PTSD.

“What better way to spend your career?” he said. “And a not insignificant part of it is we get to help people.”