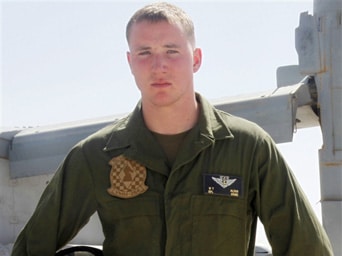 CAMP BASTION, Afghanistan, June 24, 2011 – Amid his days spent fishing, hunting and ranching horses in his small hometown of Flintstone, Md., Travis Alder dreamed of flying. After graduating from Fort Hill High School in Cumberland, Md., that dream would become a reality.

Nearly three and a half years later, Alder is now a corporal in the Marine Corps, and an MV-22B Osprey tiltrotor aircraft crew chief with more than 250 flight hours providing assault support for coalition ground troops in Afghanistan.Alder is currently serving his first tour overseas, and is deployed here with Marine Medium Tiltrotor Squadron 264 from Marine Corps Air Station New River, N.C.

The 21-year-old enlisted after he graduated high school. He said that the terrorist attacks on American soil and a family legacy of military service contributed to his decision.

“September 11 really opened my eyes to what was going on in the world, and I decided that when I had the chance, I wanted to do my part,” Alder said. “I feel like we need to keep the fight over here unless we want it coming to our doorstep again.”

Alder said his grandfather was a Marine, his uncle fought in the Vietnam War, and his brother-in-law, who he also considers his best friend, already was in the fight with 1st Battalion, 8th Marine Regiment. That was enough to send the headstrong country boy to Marine Corps Recruit Depot Parris Island, S.C., where the uncertainty of his forthcoming Marine Corps aviation career awaited.

“I enlisted without knowing what kind of aircraft I would be a crew chief on,” he said. “I was fortunate because at that time the Marine Corps needed Osprey crew chiefs badly. I guess it was just luck of the draw.”

Alder is known for his energy and drive and those characteristics meld with his desire to know every aspect of his aircraft as well as any pilot or mechanic in the squadron.

“Anytime I’m not flying I spend time reading and studying the technical manuals for the Osprey,” he said. “I have to understand everything about the aircraft, commit it to memory and make sure I am as well-rounded as possible. I like to think of myself as a jack-of-all-trades when it comes to the Osprey. If I’m not turning wrenches or helping other birds get up in the air, I’m training to better myself.”

Fellow Osprey crew chief Marine Corps Sgt. Joseph Meccico, whom Alder considers his mentor, has known the Maryland native for two years. The pair attended crew chief school together and are now both deployed with VMM-264 to Afghanistan.

“Alder does an outstanding job,” Meccico said. “He stays heavily engaged and focused at all times. He is always aware of what’s going on with a mission and is very descriptive when he flies in calling out obstacles.”

Alder said the flightline section he works in is like a brotherhood. Marines in the section, he said, often refer to themselves as “La Familia.”

“Being in the plane you really do rely on your buddies,” he said. “The pilots rely on us, too. We’re their eyes in the back of the aircraft and paint a picture of what they can’t see on the ground for them.”

Alder helps the pilots with navigation, assessing landing zones, spotting threats, loading passengers and cargo, manning the machine gun on the ramp, and advising the pilots of mechanical issues while in flight.

“Whether we are calling a plane to the deck or telling them how to execute maneuvers to evade a threat, communication is key,” he said. “Once you get out there everything else goes out the window and you have to have a clear mind and maintain situational awareness.”

Crew chiefs have a very demanding job, Alder noted, but whether he’s working with the mechanics in the hangar getting aircraft ready to fly or in the back of the plane advising pilots during flight, it’s all worth it.

“This job is very rewarding,” he said. “Helping the guys out on the ground means a lot to me. As for Marines I work with and myself, we are able to come back to a forward operating base that is secure, so giving other Marines that opportunity is important. They rely on us to get what they need out there.”

Alder plans to reenlist in the Marine Corps after his first term and wants to apply for the Marine Enlisted Commissioning Education Program and hopefully become an Osprey pilot. He’s also considering the option of becoming a crew chief instructor.

“I want to train new Marines to do what I do,” he said. “My hope is that when they come out here they’re able to accomplish the mission as well, if not better, than we have.”