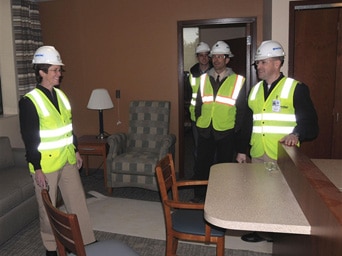 The relocation will mark a historic moment in both iconic institutions’ histories and one of the final milestones before they officially merge to become the Walter Reed National Military Medical Center.Navy Capt. David A. Bitonti, chief of staff for integration and transition at the Bethesda facility, has been part of a team preparing for that merger since Congress directed it as part of the 2005 Base Realignment and Closure plan.

The well-choreographed plan that has been driving the consolidation is now entering its home stretch. Construction projects that dominated the Bethesda campus for the past six years are completed. Renovation efforts are wrapping up, and staff orientations are under way to ensure the newly arriving staff members are able to provide uninterrupted patient care through the merger.

The outpatient clinics and staffs will be the first to move, with inpatients to follow in a procession of ambulances expected to make its way around Washington’s Capital Beltway in late August, Bitonti said.

As the calendar moves steadily toward the Sept. 15 deadline for the consolidation to be completed, Bitoni said he’s excited by the possibilities that will come from bringing the two flagship medical centers together as one organization.

“When you look at the two powerhouses that Walter Reed Army Medical Center and the National Naval Medical Center are, and you think about combining them together into a singular facility, that speaks to itself about the good things to come for our patients and beneficiaries,” he said. “I think the level and the quality of health care we provide will rival any institution in the country, and maybe the world.”

The new Walter Reed National Military Medical Center, which the staff here refers to simply as “Walter Reed Bethesda,” promises to take military medicine to a whole new level as it provides a central hub for specialized care, Bitonti said.

About 60 percent of the patients currently receiving specialized or “tertiary” care at Walter Reed Army Medical Center, which is slated to close under BRAC, will be treated at the Walter Reed Bethesda facility. This is expected to include the lion’s share of the most severely wounded warriors, including all amputees and patients suffering traumatic brain injuries and other psychological problems.

The remaining 40 percent of Walter Reed’s current patients, typically those receiving more standard primary care, will be treated at Fort Belvoir, Va. That hospital, undergoing a massive renovation, will triple its inpatient capacity to more than 120 beds.

For the Bethesda campus, the consolidation will mean a jump from about 600,000 to about 1 million patient visits per year and expansion of its inpatient capacity to 345 beds.

To prepare for the influx, planners launched a massive construction and renovation effort that has doubled the campus’ capacity to 2.1 million square feet. “I think when it is all said and done, our medical campus here will be just slightly under the square footage of Mall of the Americas in Minnesota, Bitonti said. “We are going to have a phenomenal facility.”

The Arrowhead Building, with about 138,000 square feet, opened in mid-January as the new home to the emergency department and a 50-bed intensive care unit. Other new buildings dotting the Bethesda campus include a wounded warrior barracks with 153 two-person suites, a new administration building and 70,000-square-foot gym and two parking garages.

Some of the recent additions to the Bethesda campus that are helping set a new standard in wounded warrior care were not specifically part of BRAC. The National Intrepid Center of Excellence for Traumatic Brain Injury and Psychological Health, which marked its first anniversary last week, was a gift of the Intrepid Fallen Heroes Fund. Three new Fisher Houses opened early this year, bringing to five the number donated here by the Fisher House Foundation for families whose loved ones are undergoing medical care.

Throughout the construction effort, Bitonti said painstaking care has been taken to preserve the historic legacy and feel of the Bethesda hospital. Then-President Franklin D. Roosevelt, inspired by a spring-fed pond on the grounds that reminded him of the biblical “Pool of Bethesda,” personally selected the site in 1938, and laid the cornerstone of the hospital tower on Armistice Day, Nov. 11, 1940. The hospital tower is listed on the National Register of Historic Places.

With new construction now completed, the focus now is on wrapping up about a half-million square feet in renovations across the campus to prepare for the staff and patient moves in August, Bitonti said.

For many staffers who have moved back and forth between the two facilities, he said the consolidation at the Walter Reed National Military Medical Center will formalize a long-standing tradition of sharing experience and expertise in providing the highest level of patient care possible.

Chiefs have been appointed for each department and clinic to bring the best processes from each facility to their respective areas through the merger.

“It’s very exciting to have the opportunity to participate in what is occurring here and the impact it is going to have for our patients and for military medicine,” Bitonti said.

The consolidation, along with the expansion of the Fort Belvoir hospital, will bring the best in patient care to both facilities, he said. “We are going to have two phenomenal facilities — both the facility in the north at the Bethesda campus and the facility in the south at the Fort Belvoir campus,” he said. “I just think this is a phenomenal opportunity for everyone. And the good thing about that is, it is going to be our patients who benefit.”

“I think the thing that has helped us the most as the process has gone on is that we have focused on one thing,” he said. “No matter who you are, what uniform you wear or what place you come from, we all rally around the fact that we all care about delivering the absolute best care for the patients. And that is really what this is about.”