Home World And What About Jewish Anti Gentile Studies? 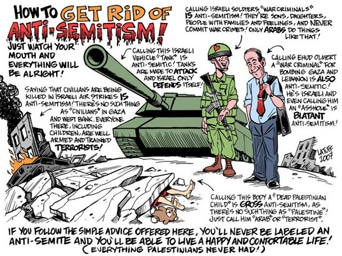 American Jewry won a victory last week: Yale University bowed to pressure – it is now starting yet another initiative to study anti-Semitism, after a decision to cancel an earlier programme had sparked criticism.

The earlier programme created in 2006 was cancelled because it had produced  “little scholarly work,” and the institute’s courses had not attracted large numbers of students, according to Donald Green, the director of Yale’s Institution for Social and Policy Studies.

Abe Foxman of The Anti-Defamation League criticised Yale for cancelling the programme and welcomed the new initiative, saying “We are satisfied that Yale University understood the critical importance of continuing an institute for the study and research of anti-Semitism”.

The new programme will be led by Yale professor Maurice Samuels, who states that Yale has some of the leading scholars in the world working on anti-Semitism and interfaith relations. He intends to focus on contemporary and historical anti-Semitism.

However, for all Yale’s efforts, I remain convinced that Samuels will not be able to produce any valuable scholarly work either – the reason is simple: almost the entire body of research on ‘anti Semitism ’ conducted in recent decades is solely concerned and obsessed with recording the historical points at which hatred of the Jews manifests itself. And yet, for some bizarre reason, such scholarly work on anti Semitism never seeks to understand, and is totally impervious to the socio-economic, the ideological, theological and historical contexts, motivations, causes and reasoning that have existed behind such outbursts of hatred against the Jews.

These countless studies on anti Semitism rarely look into the causes, and rarely try to understand why anti Semitism arose in so many places throughout history.

Instead of elaborating on the causes that may lead to anti Semitism, the discourse on anti Semitism is a unique chronological account that only ‘starts to tick’ as soon as an ‘anti Semitic’ event is detected. Everything prior to that is a blank slate – and so we are left, once more, none the wiser as to why people ‘turned against the Jews’ yet again.

I’d like to suggest here, that for an academic study of anti Semitism to be scholarly and comprehensive, and if we are to even begin to understand the roots of anti Semitism, then primary attention must surely also be dedicated to the considerable body of anti-gentile views expressed within the Torah, Talmud, and within contemporary Jewish ideology and politics (Zionist and Jewish anti-Zionist alike).

The institute’s scholars would also be well advised to elaborate on Jewish cultural supremacy, and Jewish political lobbying, from Purim to AIPAC.

For a study of anti Semitism to become scholarly and valuable, instead of merely a form of  hyper-emotional hysterical ranting, the researcher would also be advised to first assume that, perhaps, anti Jewish feelings might well have root causes which could be rational, and could be explained and understood — yet not justified — in terms of causality and reason.

Instead of assuming that the Goyim are just a bunch of crazy blood thirsty lunatics that periodically just went mad again and again throughout history in their dislike for Jews, the scholars would rather be advised to look for the root causes that may well have lead to an anti Semitic event, ideology or text.

Such a study then, would surely be academically and socially valuable, and I believe it would also be crucial for Jews and Israelis, so they may be enabled to understand the world they live in, and to grasp their role in it.

Some commendable studies by Jewish academics have already been done in that area : The Jewish Century by Yuri Slezkine, The Pity Of It All by Amos Elon and Jewish History, Jewish Religion by Israel Shahak and even early Zionist texts by Max Nordau, Ber Borochov and others  all provide some adequate answers to questions regarding the origins of anti Semitism.  Interestingly enough, none of the above studies were produced or sponsored by ‘anti-Semitism research institutions’ . The above scholars attempted to grasp the origins of animosity towards the Jews, instead of looking for a symposium in which they could moan about being hated. The three former at least,  were driven by genuine intellectual curiosity rather than by a need for collective therapy.

“Like many, I am concerned by the recent upsurge in violence against Jews around the world and I plan to address these concerns,” said Samuels the head of the new Yale Anti Semitism research centre.

Might I suggest that Samuel should be far more concerned with the upsurge in violence that is committed by the Jewish State in the name of the Jewish people.  Samuels should look into the role of AIPAC in shaping American and world affairs.

Will Samuels be courageous enough to do so? I do not know Samuels, but somehow, I find it hard to imagine.