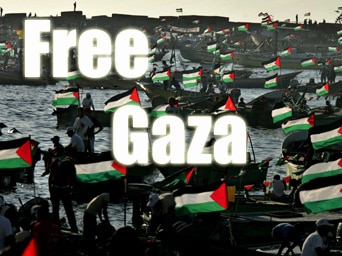 Israel, the angry, unhappy and psychological misfit nation it is, full of hate and contempt for the world and human value, is a country that never gives damn or due considerations to international law and always have contempt for world opinion will most likely send its army of war criminals to assault the freedom flotilla heading out to Gaza this week.

The siege and blockade of Gaza is not only criminal and brutal, but has no basis in international and humanitarian laws and is used by Israel as an excuse for the group punishment of Gaza, people and leadership. This collective punishment find sanctions and support from the US, most of Western Europe, certainly from Ramallah leadership as a way to keep the squeeze on Gaza, until it succumbs to pressure and gives full recognition to Israel as Fatah and the PLO did in Oslo. Even then the siege will continue any way.

Of course Hamas government is not doing much about ending the siege either and it too is holding the people of Gaza hostage to its rule and its lucrative tunnel business. In fact, I do not think the Palestinians nor the Arabs are doing much to challenge Israel siege and blockade of Gaza. They too should be sending aids ships to Gaza every day, until this wall of silence and fear is broken once and for all.

If the issue is “security” for Israel making sure there are no arms or weapons smuggled into Gaza, one can understand that, and there are thousands of ways and arrangements that allows the “international community” to inspect goods and products and passengers destined to Gaza.

Arrangements that I proposed in my earlier posting and website “www.gazaoperationhope.com” including the setting up of a staging area in Cyprus, under US and NATO where all goods and shipments destined to Gaza undergoes thorough inspection in Cyprus.

Similar staging area under UN auspices can be set up at Gaza Port beyond the reach of Hamas or any other militant group ensuring the safety and security of people and goods leaving Gaza and coming into Gaza. These arrangements should go well hand in hand with the post Mubarak Egypt and its plans to open and keep open the Rafah Crossing.

Then who gives a damn if Israel decide to build a security wall around Gaza that is a mile high, if the people of Gaza are free to move around, free to travel and free to trade with rest of the world and foremost allowed to rebuild what Israel funded and supported by the US destroyed in its savage war on Gaza in December of 2009.

The excuses given by Israel and its supporters within the US are not only silly and stupid but makes no sense at all, justifying bully, thuggery and hijackings on the high seas, no different from the Somali Pirates in the Indian Ocean, and its shows the moral and political bankruptcy of Israel and its Zionist agenda and ideology and its sponsors in official Washington.

Of course one need to keep in mind the kind of stupid list that Israel uses to keep the siege of Gaza going. It banned pasta, ketchup, lentil, and hearing aids, chocolate items that are forbidden to the people of Gaza. And I will not be surprised if Israel added homos, falafel to its list. Perhaps Israel has new technological use of bagel, motzaball or corn beef as construction material. Definitely this nation and its people are in terrible need of psychological and mental help. They need a million of Freud’s to help them.

Let Israel go to hell, and let Israel keep its borders crossing closed and let the people of Gaza open their port and import every thing they needs and wants through the Port of Gaza. No need to reward Israeli suppliers with billions of supply contracts. I know the world is concerned about Hamas smuggling weapons, and all I can say is that Hamas is simply too stupid to smuggle any thing of significant threat to Israel. All of its rhetoric about challenging Israel is empty words as much as its rockets are stupid and useless.

Let America and Europe operate all of the security measures, not to Israel’s satisfaction but to the American and European satisfaction that all materials coming through are for civil purposes and nothing to make atomic weapon out of. And yes, let Egypt open and manage the Rafah Crossing with Gaza.

Let the US and Europe open and operate both the Sea Port and Airport of Gaza. Let the world this time end the siege of Gaza. Israel, Hamas and Fatah must not hold the people hostage to their own agenda. And yes, let the US Navy and US Coast Guard patrol the coastlines off Gaza for good measure.