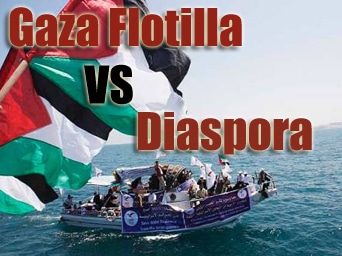 The Israelis are preparing themselves for another massacre on the high seas.

This should not take us by surprise: after all, people who are detached from a true notion of history, and driven by a continuous fantasy of destruction, would be the last to draw a lesson from their past.

Earlier today I learned that The Israeli Public Diplomacy and Diaspora Affairs Ministry held a simulation practice, ahead of the Gaza flotilla: in the course of the exercise, Minister Yuly Edelstein formed a ‘special situation room’ that is designated to disseminate ‘public diplomacy’ on the internet ,via messages,  photos, video clips and additional materials, with emphasis on Diaspora  communities, Jewish organisations, and friends of Israel around  the world.

Just in case you weren’t sure what the expected role of Diaspora Jews is, I guess that by now Minister Edelstein has provided the answer.

However, the most interesting part of the story is the detailed description of the flotilla simulation itself: the imaginary scenarios depicted by Minister Edelstein and the IDF provide a glimpse into Israeli collective psychosis.

“The exercise was based on a scenario in which approximately 500 activists on  approximately ten ships reached Israel’s territorial waters at 10:00,” says the Israeli document.  ”Despite having been warned by the IDF, the ships continued on their way. At  10:30, the Israel Navy began approaching the ships. Stun grenades were  thrown at the IDF soldiers, as well as one live grenade that caused a number  of casualties to our forces.”

But what are we to make of such an absurd supposition in Edelstein’s exercise, that the flotilla volunteers ( many of whom are women and elderly ) will be armed and dangerous, and intent of attacking the IDF?  We have seen repeated statements from the Flotilla organisers reassuring the Israelis that the Flotilla is a peaceful  humanitarian mission that has no combative intentions, and the  media have been invited to visit the boats to verify the innocent nature of the Gaza bound cargo.

What is it then? Why are these Israelis  preparing for a war? The answer is clear and simple: as I have explored in the past, Jewish identity politics is shaped by a totally unique psychological disorder. I call it Pre Traumatic Stress Syndrome (as opposed to Post Traumatic Stress Syndrome). Jewish reality is shaped by an imaginary fictional future threat. To repeat the 19Th century Yiddish joke. “A Jewish telegram: get worried, details to follow.” Yet, the lack of capacity to differentiate between reality and imagination leads to the inevitable emergence of the most tragic possible scenarios. Time after time, the Israeli collective  easily buys into any given tragic fictional and imaginary treat, and would approve any ‘counter’ measures.

The end result is known to us all: an endless  chain of colossal Israeli war crimes, that are committed in the name of the Jewish people.

The Israeli simulation scenario continues, with an inevitable body count: “At 11:00, the order was given for IDF units to  physically seize control of the ships on which there was resistance. Our  forces were attacked with live – and other – weapons and were obliged to  neutralise the assailants. The results, by 11:45, were ten IDF soldiers  wounded (one critically, four severely and the rest lightly). Among the  flotilla participants, there were two dead and 14 wounded, including two  severely.”

Brilliant isn’t it? The peace activists (most of whom, remember, are  women and  elderly) ‘opened fire,’ seeking a battle with the best and most lethal Israeli commando unit. How realistic is that ?

Then, as the imagined scenario unfolds, a fierce battle develops, in which just fourteen activists are wounded, and  only one dies. At this point, for those who fail to remember what really happened last time around, here is video footage of Israeli commandos  executing peace activists on the Mavi Marmara.

But Minister Edelstein is far from being worried: after all, the Israelis have friends around the world.  “As the events were taking place,” the scenario continues,  “the media – with emphasis on the Internet,  Facebook and Twitter – were flooded with mendacious reports (by private  users, Hamas and others among Israel’s enemies). The situation room, in  coordination with the IDF Spokesperson and the National Information  Directorate, began to disseminate credible messages to Jewish communities  and friends of Israel around the world. Those in the situation room  responsible for new media began to update messages on the social networks,  Facebook and Twitter. _____” 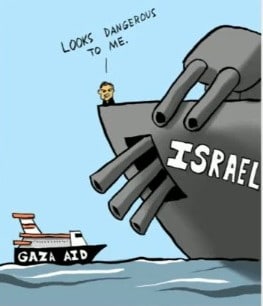 For those of us who still fail to recognise the shifts and changes that have taken place within  Zionism, Edelstein makes it clear: whilst Zionism was initially a plan to re-settle the Jews in Zion, nowadays, to be a Zionist means to stay in the Diaspora, and to ‘tweet for Israel’.  The role of  American, French and British Jews, according to Edelstein,  is to coordinate with Israel, and to  join the Hasbara war: “Given the provocation by the flotilla,” says Diaspora Minister Edelstein, “we  established a special situation room that will ensure coordination between  Government officials, Diaspora Jewish communities and friends of Israel  around the world.. I  am certain that alongside us will stand significant force multipliers in the  form of thousands of activists from Jewish communities around the world.”

I do not have any doubt that many Jews around the world want nothing to do with Minister Edelstein and his Hasbara initiative.  They are clearly going to ignore his call. I also feel sure that many Jews feel sickened and ashamed to wake up, all too often, into yet another atrocious Israeli war crime.

Yet, if the Israelis themselves clearly regard Diaspora Jews as their ‘foreign brigades’, surely we should also be allowed to look into the issue, and examine the lethal continuum between the Jewish State and its vile supporters around the world.