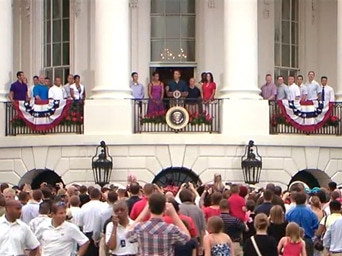 WASHINGTON, July 4, 2011 – Military service members attending the White House Independence Day celebration represent the latest in a long line of heroes who have served the United States with honor and sacrificed much to protect the freedoms all Americans enjoy, President Barack Obama said here today.

“I cannot think of anybody I would rather celebrate with than all of you,” the president said, “the men and women of our military and our extraordinary military families.”

Obama and his wife and children hosted a traditional Fourth of July celebration for members of the Army, Navy, Air Force, Marines and Coast Guard. About 1,200 service members and their families attended the White House event, which included a barbeque, a USO show featuring Train and Amos Lee and a viewing of the national capital fireworks.

“After all that you do for our country every day, we wanted to give you a chance to get out of uniform, relax a little bit and have some fun,” Obama told the troops. “But of course it’s also a time for us to reflect on the meaning of America.”

The small band of patriots who signed the Declaration of Independence might be surprised to see their legacy, Obama said, including a nation that’s led revolutions in commerce, sent people to the moon, lifted up the poor, cured the sick, fought for democracy and served as a beacon of hope around the world.

“All this could only happen because of our founders’ central faith that through democracy and individual rights ordinary people have it within their means to forge a nation that’s more just and more equal and more free,” Obama said.

Every service member is heir to that legacy, the president added, introducing five heroes, one from each service.

While on patrol in Iraq, Army Sgt. 1st Class Justin Gang’s convoy was struck by a roadside bomb and fell under enemy fire, Obama said.

“Even after being wounded by shrapnel himself, he helped secure the scene and evacuate his wounded comrades to safety and today we honor his extraordinary courage,” he added.

“As an orthopedic technician, he helps our wounded warriors regain their strength and resume their lives back home,” Obama said. “Today we honor his incredible dedication.”

Whether it’s partnering with the Iraqi army or making sure our troops have shelter in some of the toughest places on the planet, Obama said, Air Force Master Sgt. Heather Adkins “knows how to get things done and today we honor her tireless devotion.”

“After untangling the Marine’s equipment, he extinguished the flames and pulled him to safety, and today we honor his unyielding loyalty,” Obama added.

Less than 24 hours after the devastating 2010 earthquake in Haiti, the president said, Coast Guard Chief Petty Officer Marlene Riklon was on the scene helping direct aid and save lives in the midst of chaos.

These patriots and their fellow service members, the president said, are the reason why America and its armed forces “remain the greatest force for peace and security that the world has ever known.”

Together, he added, “you’re standing with all of those throughout the world who are reaching for the same freedoms and the same liberties that we celebrate today.”