It is hard to imagine that the global effect of Agent Orange will ever simply fade away. The ramifications I have been writing about along with thousands of others, makes me think it might well carry-on into the next century.

Last week I tried to relate the Agent Orange debacle to the asbestos problems wherein all the finger-pointing was to those who made the product with little regard as to why it was made and how such wide-spread usage became commonplace. I am not sinister enough to believe that someone started out trying to develop a product that would have the affects we found with asbestos, including links to cancer, birth defects, mental retardation, and other health issues, or that government mandates and building contracts required that asbestos had to be used in shipbuilding, commercial buildings, homes and industrial applications, because of its superior insulation and fire retardant properties, just to kill off the citizenry.

Unfortunately, the thought that government regulation, oversight, and rules will always protect us from those who develop products to meet contract requirements (often called for by government or private sector projects and programs),  just isn’t practical because those doing the regulation are human and can never be 100% perfect. That doesn’t excuse monumental blunders like asbestos, but in a fast-paced world, where business and innovation need to stay one-jump ahead of competition, it happens to come with the territory. An example of this is surely seen in the stoic, statist societies, where cumbersome “central government planning” (i.e. the Soviet Union, Communist China, North Korea, et al) stifles entrepreneurial spirit and innovation. We don’t see blunders of this magnitude, yet often see a totalitarian and repressive society that lingers 10, 20, or even more years behind the advancements that come from a free society.

I believe Agent Orange is far more of a problem than asbestos, with much longer ramifications. Until all records are opened, regardless of the potential litigation and court costs, we must first ascertain the complete magnitude of the problem. From my research, all current records use such words as “approximate”, “estimated”, and “as much as”, which are all hyperbole for “we are just winging it”. We need precise figures as to production, usage, application, application methods (example…there are records indicating that airplanes use to disperse Agent Orange are still out there in museums), so a complete report can be made. Then we need a SAFE method of disposal and decontamination, that doesn’t further compound the problem or create other long-term effects…but what exactly is the best method to dispose of the product?

In 1977, the U.S. Air Force (USAF) disposed of 2.22 million gallons of Agent Orange by incineration at-sea (Young et al., 1978). This operation, known as PACER HO, was accomplished under strict criteria of the U.S. Environmental Protection Agency (EPA) ocean dumping procedures. In order to obtain an ocean dumping permit, the EPA required the USAF to conduct extensive research on the environmental impact and occupational safety of the land transfer and loading operations and of shipboard incineration operations.

When the Department of Defense suspended the use of 2,4,5-T (2,4,5-Trichlorophenoxyacetic acid) a widely used chemical in the agricultural industry until being phased out, starting in the late 1970s due to toxicity concerns. Agent Orange, a defoliant used by the U.S. in the Vietnam War was equal parts 2,4,5-T and 2, 4-D. The U.S. Air Force had an inventory of 1.37 million gallons in South Vietnam and 0.85 million gallons at the Naval Construct Battalion Center in Gulfport, Mississippi (Young et al., 1978). In September 1971, the Department of Defense directed that all surplus Agent Orange in South Vietnam be removed and that the entire 2.2 million gallons be disposed of by an environmentally acceptable method. The 1.37 million gallons in South Vietnam was moved to Johnston Island, in the Pacific Ocean, for storage (Buckingham, 1982). Following the USAF reviewed of disposal techniques, including soil biodegradation, high-temperature incineration, deep-well injection, burial in underground nuclear test cavities, sludge burial, and microbial reduction (Tremblay and Virost, 1977), it was decided that destruction by high-temperature incineration was the method that warranted further research. It was not until 1974 that a plan was offered for disposal of the 2.2 million surplus gallons of herbicide, and the plan was not completed until 1977. 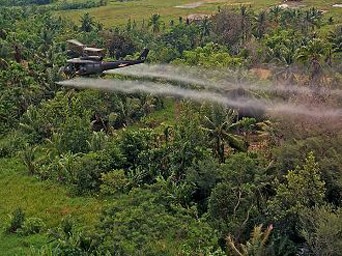 I guess until we see some negative results that might turn-up years from now, we are to assume that “incineration at sea” is the best and safest method of disposing of Agent Orange. That brings us around to many of the contaminated sites that still haunt us today, not just with Agent Orange, but with other toxins that the military has been part of over the years. Again, our government must make full-disclosure of the manufacturing facilities and produce a complete “road map” as to manufacturing, storage, deployment, and waste disposal.

We have as examples: In 1948, the Reasor Hill Company purchased the Artillery Booster Line No. 1, a 200-acre area located near Jacksonville, Arkansas that had been part of the Arkansas Ordnance Plant (AOP), and began producing insecticides. In 1962, the plant was sold to Hercules Powder Company (later Hercules Inc.). Hercules continued to make insecticides and also produced Agent Orange. An accumulation of wastes were stored on the site. From 1971 to 1976, Transvaal Company leased the site from Hercules and continued production methods with dioxin as a part of the waste until it filed for bankruptcy in 1976. It was then reorganized into Vertac, Inc., and the same products were produced, along with dioxin-contaminated wastes. Tracking all this down is like a gigantic puzzles but is far from being a game. This is a serious health-related problem with far-reaching consequences.

In 1978, the National Dioxin Survey found high concentrations of dioxin in the waste sludge and dioxin contamination in wildlife and fish as far as fifty miles downstream from the plant. In 1979, an investigation of practices at the plant was launched. Some efforts were made by Vertac to improve its handling of waste, but in 1983, because of extensive contamination, the site was declared a Superfund site. It was described as one of the worst dioxin-contaminated sites in the nation. Vertac continued to make some improvements on the handling of the toxic waste but, in 1987, the company abandoned the site, leaving approximately 29,000 drums of dioxin-containing wastes.

In 1987, the Arkansas Department of Pollution Control and Ecology (ADPCE) conducted remedial activities, including the operation of a rotary kiln to destroy the drummed wastes. Operations of the kiln started in January 1992. In June 1993, the United States Environmental Protection Agency (EPA) assumed responsibility of clean-up and operated the kiln until September 1994. During the operation of the kiln, 9,804 tons of waste was destroyed on site, and another 1,200 tons of waste were destroyed off site. The remediation using the incineration process cost approximately $31.7 million. The courts held Hercules and Vertac responsible for clean-up operations. The site was closed to the public in 2007 and is monitored by the EPA which states that it no longer constitutes any danger to the public.

Agent Orange was produced, stored, transported-through, and disposed of in many countries including Australia, New Zealand, Malaysia, Canada, Brazil, Korea, and the US. Everyone needs to come clean.