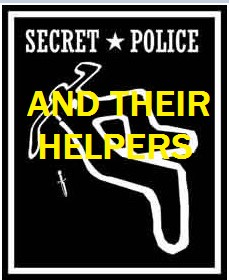 The pattern from Libya has been clear as a bell.  Gaddafi has been pouring money into NGOs (Non-Governmental Organizations), some were charities, all are now simply taking cash for pushing police state propaganda.  Some involved claim to be journalists, some academics and others “charity workers.”  All are dirty as hell.

Now its gone further.  Gaddafi, as with Saddam and the other police state monsters, is known for rounding up citizens, threat of beatings and arrests, threats of firings or worse, forcing them to take part in public demonstrations.  This is a violation of human rights, a crime.  It is a crime when Gaddafi does it and it is also a crime when others, the “guests” of Gaddafi, betray the people of Libya and take part in supporting these human rights abuses.

Today we read reports of “massive pro-Gaddafi demonstrations, totally spontaneous.”  Frankly, half the articles coming out are press releases from Gaddafi’s Ministry of Public Information (Propaganda), most with almost no editing at all.  The demonstrations are particularly sinister and part of a pattern of Gaddafi rights abuses that date back decades, abuses known, abuses long documented and abuses some have become complicit in.

When you read about the people of Libya, about demonstrations in support of Gaddafi or preparations to resist the imaginary NATO invasion, a childish game, part of the secret Tripoli-Tel Aviv alliance, keep these words in mind.  This is a witness statement:

You have to understand how things work in Libya, Syria and other countries with similar regimes. When I was living in Libya, and many years after I stopped supporting Gaddafi, I used to go on pro-Gaddafi demonstrations and rallies. In fact, I never missed one.
That’s a fact.
The reason is simple. Every state employee (i.e. 100 per cent of the working population) had no choice but to go on these or else go to prison instead.
Here’s how it worked: you arrive at work in the morning, only to find loads of coaches parked outside. Upon entering your work premises, you will find armed security agents outside asking you to submit your work ID.
They take the ID and give you a permit to the demo in its place. You are directed to the coaches, the coaches take you to the demo and they bring you back to your work premises. Upon returning, the piece of paper you were given in lieu of your work ID is stamped and taken away, and your ID is returned to you.
If you manage to circumvent this process, one of two things will happen:
(1) You get a visit from the internal security organization (Al-Amn al-Dakhili) during the night and you are taken away. If you’re lucky, they’d beat the hell out of you and release you in a few days. If you’re unlucky, you vanish. And some people, including former work colleagues, friends and two neighbours of ours, have vanished and have never been seen again. Their only crime was not to go on a demo.
(2) You go to work the very next day and, upon arrival, you are bundled away and suffer the same fate as No. 1 above.

And what about at the pro-Gaddafi demos themselves. What happens there? From my own personal experience, when you get there you find the whole damn gathering is infested with secret police. Everyone is listening, observing, some taking notes and pictures.
If you are seen to “lack enthusiasm”, i.e. not shout slogans for hours on end, then hell is your destiny. You can guarantee — and it has happened to me three times in the late 1990s — you will get visited, again in the dead of night, questioned, questioned again and again, warned and threatened that you will be watched, and then released.
If you are married or have children, insinuations will be made about what could hypothetically happen to them.
There you have it! I am talking from my own personal, direct experience.
Regards,

We can back all of this up, numerous witnesses.  This is and has been a standard practice in Libya for some time, a practice those serving Gaddafi are well aware of.
We are more than prepared to make a case against anyone working with Gaddafi and his thugs.  Let’s hear some denials.  Let the criminal courts decide what the truth is, as this is where this kind of activity will be heading.