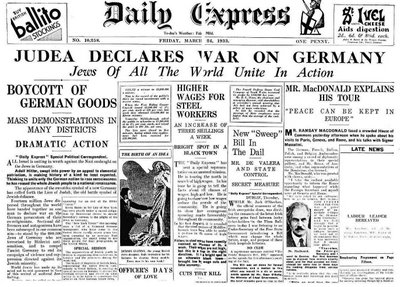 Less than two months after Adolf Hitler was made German chancellor the international Jewish community started a boycott of all German goods as part of their “war on Germany.” Six years latter Europe was at war and two years after that the world was at war.

When Israeli Prime Minister Netanyahu on May 24th spoke to the “U.S.” Congress which Israel has bought and paid for through the Israeli lobby, he bragged about how Israel is a democracy. Yesterday the Israeli Knesset has given the world yet another example of the lie that Israel is a democracy when it passed a new law which makes boycotts against the Jewish state and its illegal settlements on Palestinian lands illegal. Any person or organization that takes part in a boycott of Israel or any of its many illegal Jewish settlements can be sued by Israelis and Israeli businesses for nearly $10,000.00 without having to show damages they suffered.

One reason Israel is so keen to stop all boycotts of Israel and its illegal Jewish settlements could be because they themselves know the potential power of a boycott. The March 24, 1933 edition of the British newspaper The Daily Express, pictured below with the headline “Judea Declares War on Germany,” contained another front page article, “Boycott of German Goods.” (A great well documented book about WWII is Pat Buchanan’s Churchill, Hitler and the Unnecessary War: How Britain Lost Its Empire and the West Lost the World.) As Americans we know what happens when Judea/Israel calls for war – their puppets in the White House and Congress make it a horrible reality as happened in Iraq. And Israel is not done with us yet as there is still Iran and Syria to be dealt with. With “U.S.” Senators such as Democrat Chuck Schumer believing they are on a mission from God to protect Israel, the future for the U.S. military looks like it will be very busy and bloody indeed!

Perhaps it’s time to take the advice of the Deist and Founding Father George Washington. He wrote in a letter to Gouverneur Morris , “My policy has been, and will continue to be, while I have the honor to remain in the administration of the government, to be upon friendly terms with, but independent of, all the nations of the earth. To share in the broils of none.”