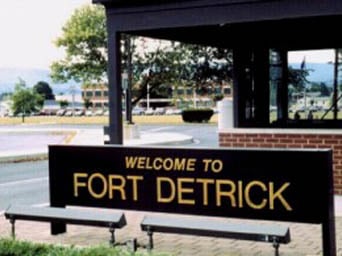 Biodefense facilities in Fort Detrick, Maryland have nearby residents rightfully concerned about a host of diseases many believe are related to Army activities that include Agent Orange testing during the Vietnam War. Most recently, a possible cancer cluster has been the subject an intense investigation.

“There’s fibromyalgia, there’s lupus, there’s cleft palate … there’s vitiligo, there’s other tumors that show up on your body parts that might not be cancerous, but they are tumors and people are living with this that grew up in these regions that they’re speaking of,” said Cincy Umberger, who has fibromyalgia and vitiligo, quoted My Fox.

A cancer cluster investigation has long been conducted in the area with particular attention to potential groundwater contamination. There has also been at least one Agent Orange protest and, of course, the media related to the 2001 anthrax attacks, the Baltimore Sun pointed. The attacks were claimed to be started by researcher at the Fort Detrick U.S. Army Medical Research Institute for Infectious Diseases (USAMRIID), according to the Federal Bureau of Investigations (FBI).

The most recent study is investigating potential toxic effects of prior exposure to contaminants used at Fort Detrick, with specific concern over drinking water in so-called Area B and a potentially related possible cancer cluster in the nearby community, noted My Fox. But, because the information received, to date, will be provided to the National Academies, and because the National Academies is being paid to conduct the study, some are wary about the future findings, which are scheduled for release this fall.

“It’s more disappointment in the whole process, that they’re jumping around. It feels like they’re tap dancing around the issues. They are hiring intelligent people. They will throw out a bunch of numbers we don’t understand while we live our daily lives with things they did,” said Umberger, quoted My Fox.

Agent Orange—a chemical defoliant that was tested at the Maryland facility during the Vietnam War—testing years ago is not the only activity at Fort Detrick.

Fort Detrick also houses, explained the Baltimore Sun, a 460,000 square-foot Medical Countermeasures and Test Facility that is slated to spray a large amount of test monkeys with “bioweapons agents.” This facility is just one of three other large, new, biosafety level 4 facilities, said the Baltimore Sun, which explained that a level 4 facility is meant for “studying diseases for which there is no effective cure or treatment, and required the highest level of precautions” and is being constructed at Fort Detrick in a joint effort by the Army, the National Institutes of Health (NIH), and Department of Homeland Security.

It seems that the effort was going on even while the FBI was identifying the location as the origin of the anthrax spores that were used in 2001 against Americans.

According to the Associated Press (AP), Agent Orange experiments were conducted outdoors at Fort Detrick as well as in other locations at that Army installation; for instance, the Army said it tested Agent Orange outside at what had been the Fort Ritchie location. Agent Orange, said the AP, has been linked to a number of adverse effects, including a variety of cancers, in veterans exposed to the toxin in Vietnam when it was deployed to kill enemy foliage cover in the 1960s and 1970s.

NewsInferno.com disclaimer: This article: Possible Cancer Cluster in Fort Detrick, Maryland Under Investigation was posted on Thursday, July 14th, 2011 at 6:45 am at NewsInferno.com and is filed under Health Concerns, Toxic Substances.
ATTENTION READERS
Due to the nature of independent content, VT cannot guarantee content validity.
We ask you to Read Our Content Policy so a clear comprehension of VT's independent non-censored media is understood and given its proper place in the world of news, opinion and media.