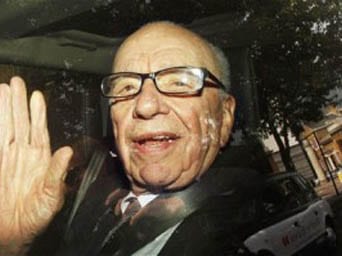 It was eventually learned that an Iraqi flim flam man named Ahmed Chalabi sold Miller and others on his allegations. His fantasy stories were trotted out as news.

The spying activities being currently revealed about Rupert Murdoch’s operations should be anything but surprising to anyone taking the trouble to analyze what has been happening.

There was the same rush to war in Iraq as there would be to instill George W. Bush in office and keep him there by hook or crook, using such unsubtle means in 2004 as to have commentators that Bill O’Reilly assured us operated objectively count down the number of days to Bush’s re-election. To use the term re-election was a falsehood since it has been fully documented that Bush was never actually elected in 2000.

Murdoch’s Fox News operation received a break. It came when New York Times reporter Judith Miller’s revealed in print and in a PBS series that Iraq’s ruthless dictator Saddam Hussein, who was brought to power with ample CIA assistance, possessed weapons of mass destruction including deadly chemical weapons. The fact that such a series aired on PBS flies in the face of Fox’s O’Reilly and Sean Hannity long claiming that the entire Public Broadcasting Network was no more than a left wing tool.

It was eventually learned that an Iraqi flim flam man named Ahmed Chalabi sold Miller and others on his allegations. His fantasy stories were trotted out as news. The stories were just what the Murdoch minions and the Bush Administration that it supported wanted to hear. In fact, Chalabi was so welcome in neocon circles that he was the guest of First Lady Laura Bush at her 2004 husband’s 2004 State of the Union Address.

If you want to go to war arm yourself to the teeth with the appropriate shock stories of what the enemy is capable of doing and intends to do. Do not bother checking, just go ahead and act. Such was the case when Colin Powell was trotted out to deliver the Chalabi thesis to the United Nations.

Rather than doing any fact checking, something that serious journalists do, Fox jumped into its traditional neocon cheerleader role. Powell’s speech was described as a virtuoso performance. When a UN inspection team led by Hans Blix began a fact checking mission in Iraq and requested to finiion to go to war.

All the while Murdoch’s minions accelerated propaganda. The Fox war merchants sought to drum up support among the masses for Bush’s unjustified rush to battle by belittling those who sought the truth.

Blix was from Sweden, whose residents were described as wimps. President Jacques Chirac of France, who asked that any military action be delayed until the inspection was completed and a report issued, was denounced as leader of a nation of quiche eaters and we all know that real men do not eat quiche, as the cliché goes.

The name French fries was even changed. Bush was happy to cooperate as the fried potatoes thereafter served on Air Force One became known as freedom fries. Fox’s self-described unbiased reporters love heaping ridicule. They unleashed a multitude of disparagement Europeans seen as standing in the way of a swift Bush-Cheney-Rumsfeld aerial assault on Baghdad.

Fox was happy to repeat tidbits from Powell’s speech and the warning of Condoleezza Rice that unless America took vigilant action it would be confronting a nuclear mushroom cloud unleashed by Saddam Hussein. You remember Saddam, the same leader that a smiling Rumsfeld and cohorts had earlier traded arms for oil with. A silent bonus of chemical weapons was also added.

Some concerned analysts asked what would happen to Iraqi civilians in the wake of a shock and awe bombing campaign. Donald Rumsfeld had an answer. American planes would drop smart bombs. They were bombs with preconceived intelligence to avoid civilians. Saddam’s warriors would be the only ones punished.

As the first bombs were unleashed on Baghdad Bush was caught on White House video in a celebratory mood. He pumped a clenched fist into the air and proclaimed, “Feels good!”

Fox had done a thorough job of orchestrating a march to war in Iraq that was based on fictitious data. Now it was time to go into overdrive pushing the account that the attack was well received and there was nothing to be concerned about. After all, the Bush-Cheney-Rumsfeld New World Order was in charge and what could be better than that?

Fox’s man in Baghdad proved a prophetic choice. Who could better serve the New World Order in Baghdad than Oliver North? This was the same North who had helped privatize U.S. foreign policy. He had been brought down in an effort to win a U.S. Senate seat in Virginia as a fantasist with a reckless regard for the truth by none other than Nancy Reagan.

To watch North’s live interviews with American military personnel that he proclaimed to be liberators was to observe the aftermath of a bloodless coup. There was no evidence of any of the civilian deaths and casualties that many Americans who were smeared by the likes of Murdoch henchmen such as O’Reilly and Hannity contended would occur in the event of a U.S. invasion.

What happened to expose North and other Fox propagandists? Al Jazeera, an Arab television broadcasting network based in Qatar, showed what was really happening in Baghdad. Al Jazeera’s cameras revealed live scenes of the dead and wounded. Gripping hospital scenes were observed in which doctors and nurses sadly reflected on the overcrowded conditions at Baghdad hospitals.

How did the Murdoch propagandists and their allies in arms, the Bush-Cheney-Rumsfeld Administration, respond? Since Al Jazeera was trumping Fox’s propaganda, America evicted Al Jazeera from Iraq, closing its Baghdad office.

Meanwhile a fearless Peter Arnett presented documented cases of innocent Iraqi civilian victims, including a woman who left a family without a wife and mother when she was killed in a bombing of a Baghdad restaurant where American forces believed Saddam Hussein was dining.

What was the response of Senator Jim Bunning of Kentucky to Arnett’s non-refuted Iraq reporting? Bunning recommended that Arnett be tried for treason.

ABOUT THE AUTHOR: Bill Hare received a bachelor’s in political science with history and English minors at California State University at Northridge. Later received a Juris Doctorate degree from University of San Fernando Valley College of Law, serving as editor of the Law Review.

Wrote international historical work “Struggle for the Holy Land: Arabs, Jews and the Emergence of Israel.” In the movie historical field wrote “Early Film Noir”, “L.A. Noir” and “Hitchcock and the Methods of Suspense.”

On the political essay front, have done nearly 500 articles, posting at the former Political Strategy which is now Political Cortex along with The Smirking Chimp.

Those who are interested in learning to trace their family roots are invited to the free genealogy seminar that runs from 9 a.m. to 12:30 p.m.

No reservations are needed.