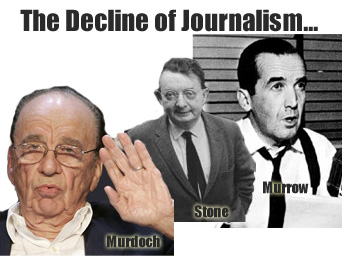 On Saturday morning, Rupert Murdoch apologized to the British public in a full-page advertisement that will run for three days in seven national newspapers stating:

“We are sorry. The News of the World was in the business of holding others to account. It failed when it came to itself. We are sorry for the serious wrongdoing that occurred. We are deeply sorry for the hurt suffered by the individuals affected.”

The apology was first published the day after two of Murdoch’s senior executives resigned over a phone hacking scandal that has engulfed his media empire as it also shines a light on a lack of journalistic integrity and ethical behavior.

Police in the United Kingdom have identified almost 4,000 potential targets of phone hacking from a private investigator working for the paper, with one being Milly Dowler, a murdered British teenager whose voice mail was allegedly hacked by staff working for the News of the World. There were also allegations that News Corp. reporters may have bribed police officers.

The FBI is also investigating News Corp. employees or associates who may have tried to hack into phone conversations and voice mail of September 11 survivors, victims and their families.

Keith Rupert Murdoch is an Australian-born American media magnate and the founder, chairman, and chief executive officer of News Corporation.

In the late 1950s he began dabbling in television, and his first foray into TV in the USA, was when he created Fox Broadcasting Company in 1986.

When Rupert Murdoch won his bid to take over Dow Jones and the Wall Street Journal in 2007, the Australian media baron brought one of America’s oldest, most respected and widely-circulated newspapers into his vast media empire.

Besides amassing a media empire, Murdoch has repeatedly been accused of using his media holdings to advance his political agenda.

In 2003, all of Murdoch’s 175 newspapers supported the Iraq invasion. He spoke to former British Prime Minister Tony Blair in the lead-up to the invasion; some in Blair’s inner circle even called him “the 24th member of the [Blair] Cabinet.”

Murdoch has also played host at numerous private meetings with influential Democrats and Republicans who all dismiss the gatherings as politically insignificant and claim they are merely social events with dinners and drinks.

America’s most forward thinking founding father, Thomas Paine warned that if the majority of the people were denied the truth and the ideas of truth, it was time to storm the “Bastille of words” for “True democracy is never handed down by elites. It is always fought for and struggled for” and dissent is the only thing that can keep a democracy healthy.

“We must not confuse dissent with disloyalty. When the loyal opposition dies, I think the soul of America dies with it.” – Edward R. Murrow

In 1958, journalist Edward R. Murrow gave a speech at the Radio-Television News Directors Association, which nailed the network television establishment and its emphasis on popular entertainment over programs that would enlighten and educate the public.

That speech was the climax of the 2005 motion picture Good Night, And Good Luck

Isidor Feinstein, better known as I. F. Stone or Izzy Stone was an independent radical investigative journalist who noted:

“All governments are run by liars and nothing they say should be believed.”

“I made no claims to inside stuff. I tried to give information, which could be documented, so the reader could check it for himself…Reporters tend to be absorbed by the bureaucracies they cover; they take on the habits, attitudes, and even accents of the military or the diplomatic corps. Should a reporter resist the pressure; there are many ways to get rid of him… But a reporter covering the whole capital on his own — particularly if he is his own employer — is immune from these pressures.”

“The only kinds of fights worth fighting are those you are going to lose, because somebody has to fight them and lose and lose and lose until someday, somebody who believes as you do wins. In order for somebody to win an important, major fight 100 years hence, a lot of other people have got to be willing – for the sheer fun and joy of it – to go right ahead and fight, knowing you’re going to lose. You mustn’t feel like a martyr. You’ve got to enjoy it.”

Stone’s peers and colleagues viewed him as a pariah for Stone spent his career challenging government deception and press complicity and confronted deceptions and outright lies of the American government in a time when nobody else had the integrity, ethics; guts/kerbangers/thatcher’s to do it.

Izzy Stone was one lone voice out of the wilderness of spin that emanated out of D.C., and he lived long enough to see himself vindicated on “searing issues such as the Holocaust and fascism, the McCarthy purges, the nuclear arms race, the civil rights movement, the war in Vietnam, and the endless struggle between Israelis and Palestinians.” [1]

Murdoch’s vindication remains to be seen, but may Murdoch’s trials be the wake up call to The Media who have lost their way by neglecting their commission: to go out, seek and report the brutal truth, and NOT meddle, tamper, alter, damage, falsify, nor secretly or improperly engage with Power that the Media is charged with investigating and reporting on.