1. Veterans Affairs reaching out to women veterans.  The Keene Sentinel  In an effort to make health care even better for the female veteran, the US Department of Veterans Affairs (VA) has begun a major initiative to reach out to female veterans to get their input on ways to improve health care services which the VA …
2.  Veteran’s clinic forms a triad.  Plattsburgh Press Republican  More advanced treatment has always been available at the Stratton VA Medical Center in Albany, an almost three-hour trip one way. Now with three clinics in the northeast portion of New York state, our local veterans, who number around 4500 regionally, …
3.  Grant supports second vets’ educational summit.  Hometownlife.com  The forum targets veteran advocates who work with veterans to obtain benefits, as well as veterans and their families to learn about the VA’s programs. The 2010 summit narrowed the gap in Michigan’s lack of continuing legal education required of …
4. Serving in Afghanistan turned a tough guy into a nervous wreck.  DesMoinesRegister.com  He went to therapy at the US Department of Veterans Affairs Hospital in Des Moines, but the non-intensive counseling – appointments were 30 days apart – didn’t help. One night in spring 2010, Luke polished off a 12-pack. He argued with his wife. …
5. ‘Jobless veterans, US national disgrace’.  Press TV  According to data published by the United States Department of Veterans Affairs, the number of US veterans, homeless on any given night as of June this year, stands at a staggering 75700. The unemployment rate among American young veterans stood at …

6.  Veterans find opportunities at job fair at Beloit armory.  Beloit Daily News  “Getting anybody into a job is a hard thing right now,” said Ron Stigler, a regional supervisor with the state’s department of Workforce Development veterans affairs services. “The focus is veterans and we want to promote their qualities as a fine, …

7.   VSO in N.J. offers Iraqi and Afghanistan veterans many services.  newjerseynewsroom.com  The VSO helps veterans and their dependents apply for service-connected compensation and pension benefits — and other earned entitlements — through the US Department of Veterans Affairs. Each NJ county office serves as a full-service agency, …

8. HUD-VA to combat vet homelessness.  The Warner Robins Patriot  The Department of Housing and Urban Development and the US Department of Veterans Affairs are collaborating to supply permanent housing and case management for 6790 homeless veterans across the nation. According to news releases from HUD … 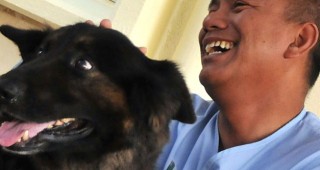 VA announced a new pilot program that will emphasize dogs’ therapeutic potential for Veterans. Fourteen Vets will interact with dogs while they receive residential treatment for PTSD and TBI. Read more at VAntage Point