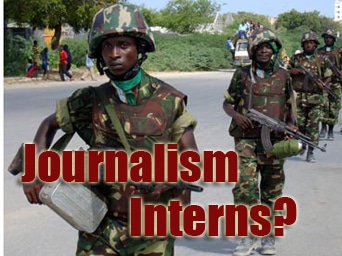 We knew we would have difficulty selling this concept to progressives here in America. So we decided to infiltrate one of our specially trained commandos into a African rebel camp to assassinate  their leader. Our fundraising guru advised us that this would turn on the money spigot.

Our agent’s name must be kept confidential of course to protect his family from retribution.

The original plan, as often happens in these kinds of missions went out the window when the rebels guarding their leader personally insulted our operative who then revised his primary mission. At first we were concerned with the lack of discipline, but then realized that Agent M had shown tremendous initiative.

When the surviving guards ran in terror to save their lives, the rebel leader emerged from his tent only to eat a few rounds from our awaiting assassin in his incredible disguise.

To all of you folks in the comment sections who have taunted VT with your challenges that although we talk alot and criticize others, that at then end of the day we never really do anything. Well, today you will see up close and personal that those days are over.

We are heading back out to the field, taking names, and punching tickets…and we will bring back lots of videos for you doubting Thomas folks out there.

Now I know some you bleeding heart liberals are going to say that this is a cruel, white supremacist exploitation of using the locals against these ruthless rebels. Yes, we don’t provide them much equipment, and they do basically live off the land. But that is their natural way of fighting.

War is a nasty business, and what you are about to see is not pretty. But somebody has to do this.  And ‘Harold whoever’, last week who said we are just monkeying around here…well Harold…you don’t know the half of it, because you are about to get an up close and personal look at our dark side.

We are…going primal on these rebel dudes. Today is just a warm up. Next week we will be demonstrating some harsh interrogation techniques…all of which are illegal, but our people do not accept UN jurisdiction.

Personally, I am not big on the prisoner thing, you have to feed and take care of them, and then later maybe get sued or something. I would just as soon pop them and be done with it.

But Gordon, his attitude was, what are we going to do after dinner…we will have nobody to mess with? So, because he is senior, and has the most combat experience, he ruled on this one since I got to pick ‘M’ for this first mission.

***Warning: This is a graphic video. No one under age should be allowed to see this as it is at point blank range. All contracting inquiries should be sent to me directly at VT.

Next, we take you behind the scenes to some of our secret training facilities. It took years of work, research, testing, trial and error to teach these guys how to kill…and with no mercy.

Now, we move on to the fringe benefits being involved in primal activities.  Girls with nice breasts really dig guys that are into this stuff. Oh…you think I am pulling your leg? Once again, you are wrong, and I am right. But forget about this one. Josefine is mine.  It was love at first sight. Find your own.

And if you mess with mine, you know who/what I am going to send after you. Remember…no mercy, none whatsoever.

And lastly…some AK-47 basics for you all.