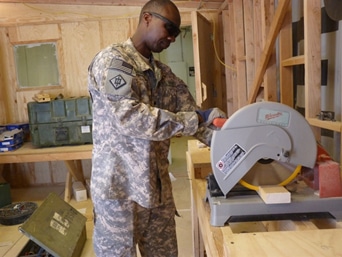 LOGAR PROVINCE, Afghanistan, July 20, 2011 – The thirst for freedom and the hunger for a better way of life led Ali Baharanyi to seek asylum in the United States to escape a tyrannical regime in his native Africa.

Now an Army specialist, Baharanyi — a native of the Democratic Republic of Congo who now resides in Auburn, Ala. — is a 54th Engineer Battalion combat engineer.Baharanyi originally hails from Lubumbashi, where he was born in 1974 when the Congo was called Zaire. The country has been enmeshed in civil war for much of the past 15 years. Political, ethnic and state-based actors have competed for control of its valuable natural resources.

In Lubumbashi, Baharanyi said, he grew up having his basic needs met.

“I can’t say we lacked anything,” he said, “but my dad was a visiting professor at Princeton University. He was spending most of his time outside the country.”

The war in the Congo became a part of Baharanyi’s life one night when soldiers visited his house. The regime soldiers beat up two students who were renting the guest house to send a message to Baharanyi’s father, who supported a different political party.

After the attack, Baharanyi’s family left Lubumbashi feeling it was no longer safe for them. Baharanyi soon finished high school and was reunited with his family in Bukavu. In a move to evade possible harm Baharanyi moved with his father to America in 2006.

Life in the United States posed new problems for Baharanyi, including a language barrier and extreme culture shock.

“I didn’t speak English, and in my country, the young have respect for older people,” Baharanyi said. “I found 18-year-old kids didn’t care about your age.”

U.S. officials granted Baharanyi asylum, and he decided to join the Army. A National Guard recruiter assisted him in 2009 after he earned his green card.

“I felt compelled to give back to the country that provided my family and me a safe haven when our own country took everything from us,” Baharanyi said.

Baharanyi held several positions in two different companies of the 54th Engineer Battalion. He works in the construction management squad and aspires to become an officer so he can optimize his contributions to his new country.

“I want to serve my new country in the fullest capacity possible by using all my assets and experiences as an officer in the U.S. Army,” Baharanyi said. But at age 36, he is unable to apply without a waiver.

“An officer in the battalion is helping me by finding out if we can possibly process an application for direct commission,” he said.

Baharanyi is well liked among his peers and leaders, who say his positive work ethic and his ability to manage his duties help him to stand out.

“‘Baha’ is a hard worker and really nice guy,” said Army Spc. Shiyan Liu, a carpenter assigned to 54th Engineer Battalion, who is originally from Beijing. “I feel very comfortable with him, because he offers me sound advice. Baha is a bit older than me and more mature than most people around here.”

Army 1st Sgt. Steven Barker of the 370th Sapper Engineer Company is Baharanyi’s former first sergeant and thinks highly of his potential to become an officer.

“Since last September, I’ve known Specialist Baharanyi to be an extremely well-educated soldier and a decent family man,” Barker said. “He serves as an exemplary role model to all his peers while always seeking to improve himself and those around him.

“Baharanyi uses his intelligence to aid our battalion in company intelligence support teams, and he is able to brief higher forms of leadership with amazing ease,” Barker continued. “As an officer, Baharanyi will be a great leader, both tactically and interpersonally.”