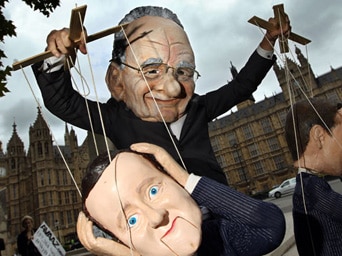 Christopher King considers whether the unravelling of Rupert Murdoch’s power in the UK will serve as a wake up call to British politicians whom for years he has targeted on behalf of the US and Israel.

British politicians have turned on the media mogul Rupert Murdoch with a vengeance enhanced by many years of licking his boots.

The trigger events were revelations by investigative journalists at the Guardian newspaper that Mr Murdoch’s newspapers hacked the telephones of murdered children and their families, celebrities, politicians and even the royal family in seeking sensational stories. They paid the police very large sums for information and there are issues about why the police investigation of hacking several years ago was far short of thorough.

Mr Murdoch is hopefully finished in Britain. If it were simply a matter of telephone hacking and a little bribery by his over-enthusiastic editors he could claim innocence, take sanitary action and eventually acquire BSkyB television that he so much wants. That now appears to be impossible due to a problematic underlying issue.

In the 1980s and early 1990s Mr Murdoch was generally supportive of the Conservative Party under the Thatcher and Major governments. He then switched and gave his full support to Anthony Blair and Labour. Doubtless, Mr Murdoch easily categorized Blair as venal and unprincipled – he sees such people every day. The Americans needed a front man to sell their Iraq war in Europe and Israel needed an apologist. Mr Blair was ideal and Murdoch was well known for making 10 Downing Street his first stop whenever he came to London.

“The Americans needed a front man to sell their Iraq war in Europe and Israel needed an apologist. Mr Blair was ideal and Murdoch was well known for making 10 Downing Street his first stop whenever he came to London.”

In the last election, however, Mr Murdoch switched political parties again and gave his support to David Cameron and the Conservatives.

In Britain, political memories go back not merely decades but centuries. This does not appear to have been appreciated by the Australian-raised Mr Murdoch, despite his Jewish ancestry. He has always been known to meddle in British politics and to have a reputation as a king-maker. His switch back to the Conservatives made him an unpredictable, opportunistic meddler. Opportunists themselves, that will not do to our politicians.

It appears that the British political establishment has been subconsciously awaiting a trigger to turn on Mr Murdoch and now that it has happened it cannot afford to let him continue to meddle in its affairs. Mr Murdoch has thought that he understood British politics but he has only understood the venal Anthony Blair. Surely, Mr Murdoch dealt with the money side of Mr Blair’s subservience to the Americans, that is, arranging his job with the bankers JP Morgan. Only Mr Murdoch had the access and credibility to do this while keeping the White House completely clear. Lord Levy was Blair’s political bagman to the Israelis; Murdoch probably his personal bagman to the Americans.

What does this outrage on the part of our politicians mean? Are they regaining their confidence and independence as the media suggest? If so, to do what? To recognize perhaps that Mr Murdoch has been a major channel for American-Israeli subversion of the country? To have the courage to demand that our government should renounce the aggression and murder in Iraq, Afghanistan and Libya in which Mr Murdoch and the Americans have involved us? Will our politicians have the courage to recognize the damage perpetrated on the country by the robber-banks and restructure the banking system in the interests of their country?

“The Murdoch propaganda machine is broken and the prime minister should note the outcome of Mr Murdoch’s policies on News Corporation, his organization’s culture. These policies have been transmitted directly to the country through both Mr Murdoch’s newspapers and the foreign policies of Anthony Blair, Gordon Brown and now Mr Cameron himself.

Rupert Murdoch is an agent of Israeli-American foreign policy and he is in the heart of this country’s government. We see the results of that policy in Britain’s involvement in 10 years of continuous warfare…”

If the banking crisis was not a wake-up call to our politicians, the actions of Mr Murdoch’s newspapers should be. His interests in Britain are not merely financial. It has always been known that his objectives are also political, which is of course why he switched his political allegiance, the better to promote his own agenda. Robert Fisk of the Independent newspaper recounts why he left the Murdoch Times when this became clear.

Essentially, Rupert Murdoch is an agent of Israeli-American foreign policy and he is in the heart of this country’s government. We see the results of that policy in Britain’s involvement in 10 years of continuous warfare against three countries, millions of persons killed, wounded and made refugees, the waste of our own soldiers’ lives and waste of enormous wealth as our economy declines. If our politicians are unable to discern where our country’s best interests lie it is not Israel and America but they who are the problem.