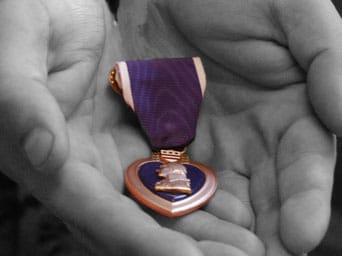 On the occasion of the closing of Walter Reed Army Medical Center, the Military Order of the Purple Heart salutes the magnificent Doctors, Nurses, Corpsmen, Medics, and professional staff who have selflessly devoted their lives to treating our nation’s wounded servicemen and women, Presidents and privates alike, and active duty and retired military personnel and their families.

Opened in 1909, hundreds of thousands of the nation’s war wounded from World War I to today, including 18,000 troops who served in Iraq and Afghanistan, have been treated at the hospital.  The hospital was named for Major Walter Reed, a U.S. Army surgeon who confirmed the theory that yellow fever was transmitted by a particular species of mosquitoes.  Reed’s success with stopping the spread of yellow fever made it possible for the building of the Panama Canal where previously the mosquitoes had caused so much death due to the disease.

The official ‘casing of the colors’ ceremony for Walter Reed Army Medical Center will take place on July 27th, and movement of the patients will begin in August.  According to VADM John M. Mateczun, Commander of D.C.-area medical facilities, “This is the largest medical restructuring ever undertaken in the military health care system.”   Patients will be moved to either the Bethesda National Naval Medical Center or to Ft. Belvoir into what will become the Walter Reed National Military Medical Center and the Fort Belvoir Community Hospital.  When the consolidations are over, the new Walter Reed will have 345 beds in all, including 50 intensive care beds and 20 operating rooms. The community hospital at Belvoir will have 120 beds, including 10 each for ICU and surgery.  Mateczun noted, “At this time of year we’re generally receiving back about 20 inpatients evacuating from Iraq and Afghanistan a week.”

The organization now known as the “Military Order of the Purple Heart of the U.S.A. Inc.,” (MOPH) was formed in 1932 for the protection and mutual interest of all who have received the decoration. Chartered by the Congress, The MOPH is unique among Veteran Service Organizations in that all its members were wounded in combat. For this sacrifice, they were awarded the Purple Heart Medal. With grants from the MOPH Service Foundation, the MOPH and its Ladies Auxiliary promote Patriotism, Fraternalism, and the Preservation of America’s military history. Most importantly, they provide comfort and assistance to all Veterans and their families, especially those requiring claims assistance with the VA, those who are homeless, and those requiring employment assistance.  Through the VAVS program, MOPH volunteers provide assistance to hospitalized veterans at VA sites and State Veterans Homes.