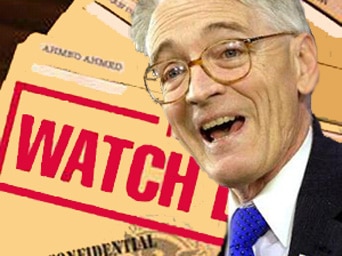 Federal agents from the FBI and CIA/FBI Joint Terrorist Task Force tried to get a distinguished international lawyer to inform on his Arab and Muslim clients in violation of their Constitutional rights to attorney-client privilege, this reporter has learned. When the lawyer refused, he said the FBI placed him on a “terrorist watch list.”

Law professor Francis Boyle gave a chilling account of how, in the summer of 2004, two agents showed up at his office (at the University of Illinois, Champaign,) “unannounced, misrepresented who they were and what they were about to my secretary, gained access to my office, interrogated me for about one hour, and repeatedly tried to get me to become their informant on my Arab and Muslim clients.”

“This would have violated their (clients) Constitutional rights and my ethical obligations as an Attorney,” Boyle explained. “I refused. So they put me on all of the United States government’s ‘terrorist watch’ lists.”

Boyle said his own lawyer found “there are about five or six different terrorist watch lists, and as far as he could determine, I am on all of them.” Despite a legal appeal to get his name removed, Boyle said, “I will remain on all of these terrorist watch lists for the rest of my life or until the two Agencies who put me on there remove my name, which is highly unlikely.”

“Whatever people might think about lawyers, we are the canary-birds of democracy. When the government goes after your lawyer soon they will be going after you,” Boyle warned. “Indeed,” he added, “the government goes after your lawyer in order to get to you, which is what happened to me. This is what the so-called ‘war against terrorism’ is really all about. It is a war against the United States Constitution.”

Writing of the attorney-client privilege, the American Bar Association has defined it as “the right of clients to refuse to disclose confidential communications with their lawyers, or to allow their lawyers to disclose them.” It further states the privilege “is viewed as fundamental to preserve the constitutionally based right to effective assistance of legal counsel, in that lawyers cannot function effectively on behalf of their clients without the ability communicate with them in confidence.”

The attempt by the government to destroy the Constitutional right of privileged communication between lawyer and client began in earnest after 9/11 when the Justice Department initiated a wave of such illegal actions. According to an article in “Criminal Justice Magazine,” Summer, 2002, “Immediately following the September 11 terrorist attacks, U.S. Attorney General John Ashcroft issued a controversial order that permits the government to monitor all communications between a client and an attorney when there is ‘reasonable suspicion’ to ‘believe that a particular inmate may use communications with attorneys or their agents to further or facilitate acts of violence or terrorism.” That order “raises a wide range of constitutional concerns under the First, Fourth, Fifth, and Fourteenth Amendments,” authors Paul Rice and Benjamin Saul wrote.

As if to mock the very concept of attorney-client privilege, military interrogators at Guantanamo prison posed as “lawyers” to trick illegally held suspects into providing them with information, according to a report in “The Catholic Worker” newspaper.

And “Newsday,” the Long Island, N.Y., daily, reported a wholesale invasion of lawyer-client privilege, as when lawyers at Guantanamo are forced to turn over their interview notes to guards, who send them on to the Pentagon facility in Virginia that is the only place lawyers can go to write their motions and where the Pentagon attempts to edit out detainees’ claims of mistreatment from the public record. What’s more, “Newsday” reported, “The military has set up a system that delays legal correspondence (between lawyers and prisoners) for weeks,” adding that “Detainees have alleged that interrogators have tried to turn them against their lawyers.”

According to “Newsday,” guards and interrogators peruse prisoners’ private legal papers and warn them that prisoners who have lawyers will wait longer to get out! Tom Wilner, a lawyer for 12 Kuwaiti detainees, said an interrogator asked one of his clients, “Did you know your lawyers are Jews?”

The U.S. government is “not only trying to deny counsel to the prisoners, but is actively trying to remove Guantanamo from any scrutiny, legal or otherwise” as well as “marginalizing the lawyers representing the prisoners,” “The Catholic Worker” said.

Placing attorney Boyle on the Terrorist Watch List is a form of punishment that is being ever more widely applied. According to “USA Today” the list grew from 288,000 names in 2005 to 1-million in March, 2009, according to an article of March 10th of that year. “People put on the watch list…can be blocked from flying, stopped at borders or subjected to other scrutiny,” reporter Peter Eisler wrote.

The attorney-client privilege is the oldest such privilege enshrined in Anglo-Saxon law and was commonly respected even under the British crown during the reign of Queen Elizabeth 1. That it is being flouted by the U.S. government today when a constitutional lawyer occupies the White House represents an incredible stain on what remains of the fabric of American democracy.

About the Writer: Sherwood Ross is a publicist for good causes and Director of the Anti-War News Service of Miami, Florida. To comment or contribute, reach him at [email protected]

Strategic Finance July 1, 2004 | Castelluccio, Michael * MAYBE IT’S A MEASURE of how we’ve all been conditioned to be competitive, but, whatever the reason, Americans love top-10 lists. There are the best-seller booklists in the weekend papers; TV shows and candidates are constantly monitored by pollsters; and there’s the Forbes “swimsuit” issue that lists the richest among us. We’ve made number one a national raison d’etre, as we pin ribbons on pigs, award Oscars to actors, and insist on repeating Vince Lombardi’s mantra to any youngster who will listen: “If winning isn’t everything, why do they keep score?” Each year Wired magazine puts together its own top 40 list of companies that the editors believe “are masters of innovation, technology, and strategic vision.” The Wired 40 isn’t just a weighted list of bottom lines. The criteria for inclusion haven’t changed since 1998 and are explained in the June 2004 issue by Kevin Kelleher: “These 40 leaders have demonstrated an uncommon mastery of technology, innovation, globalism, networked communication, and strategic vision–skills essential to thriving in the information age.” The list is dynamic–you might even call it fickle. Of the 40 that made the list this year, 25% did not appear on last year’s list. Even more surprising, 40% of the top 10, almost half, are new this year. The list is also more eclectic than you might expect. Mixed in among the pure Internet and high-tech manufacturers are drug companies, car makers, banks, entertainment companies, and an agri-tech company.

And the Winners Are …

Odds are that you can probably guess a few of those in this year’s top 10. These would be the Internet legends–companies like Amazon, Yahoo!, and eBay. And you would be right because these companies are still doing enough of the right things to keep them at the top.

#2 Amazon.com And the beat goes on, as an early pioneer morphs from specialized retailer (books) to the Internet’s General Store. go to web site google gravity download

#3 Apple Computer This is a surprise. New to the list this year, this is Steve Jobs’s musical Apple, which has the leading iPod MP3 player and the iTunes Music Store. Some of the numbers that have lifted this Apple in a gravity-free launch: Five million iPods sold gives Apple 55% of the music player market; 60 million+ songs have been downloaded at iTunes, giving them a 70% lead in commercial downloads. Add in the rest of the Apple enterprise, and it makes for a nice-size pie.

#4 Genentech Genentech is a biotech company that works at a cellular level, manipulating cells and genes to produce medicines. Avastin, a treatment for colon cancer, was approved by the FDA this year, and the company is working on a number of other cancer treatments as well as other therapies based on genetic manipulation. Other biotech/medical companies that made the Wired 40 are Pfizer (28) and Gen-Probe (33), both new this year.

#5 eBay Of course. The editors point out that the $30 billion of goods that were sold on eBay last year “make the auctioneer the 81st-largest economy in the world.” Besides loving a winner, Americans, apparently, will never pass up a good garage sale.

#6 Samsung Electronics With new consumer electronics like MP3 players and digital cameras creating a strong market for flash cards, this South Korean manufacturer positioned itself to become “a leading innovator in consumer electronics worldwide.” Samsung is new to the Wired list this year.

#8 Electronic Arts When you think of a game maker finishing above other computer giants like IBM (13) and Intel (24), you have to remember Wired’s criteria and its forward-looking bent. After crediting Electronic Arts with leadership in interactive entertainment (read gaming, for now), the magazine proposes that the next interactive media might well include movies, music, and painting.

#9 Pixar Steve Jobs again, and this time with a movie company that earned $2.5 billion and 17 Academy Awards for its five feature films and several shorts. You probably remember Finding Nemo, and so does Disney, which recalls with regret its Pixar contract that Jobs refuses to renew. here google gravity download

#10 Cisco Systems Hubs and routers–what more do you need to say? Cisco owns most of the game, and it has climbed up one more place–up from 11 last year. Not bad for pretty boring hardware.

Precipitous Falls The ascending are interesting, but so are those that have, perhaps temporarily, fallen from grace. Two very big names that have lost their footing are FedEx and Microsoft. FedEx fell from 12 last year to 26 this year. The purple and orange is still delivering 5.3 million packages every day in 215 countries, but apparently for the editors some of the bloom is off the rose–or maybe more brown is back on the roads. An even bigger surprise is the Microsoft slide from eight last year to 27 this year. Wired offers three reasons for Redmond’s rung-burns: regulators and lawsuits here and abroad; the emerging success of Linux on servers and perhaps next, desktops; the large target still flapping on the corporation’s back, attracting virus writers worldwide. Some stinging advice is offered by the editors in a “To Do” item: “Given Microsoft’s long string of scrapes with antitrust cops, it’s time for the company to start competing on the merits of its products.” And so this year’s 40 should enjoy their moment in the sun, but they shouldn’t forget another reality expressed elsewhere on pages of the magazine–what’s wired will eventually get tired.

You can get the entire list at www. wired.com/wired/archive/12.06/ wired40.html, or check out the June 2004 issue of Wired at your library.