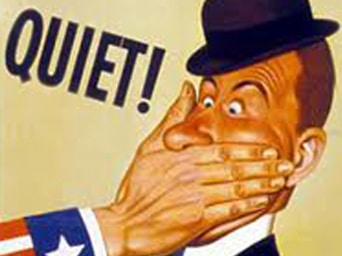 With the United States mired in seeming never ending warfare in the Middle East and Central Asia, and with America’s real national security  imperiled by a gigantic  and ever growing debt,  a number of politicians, even in the hawkish Republican Party,  are following their constituents and advocating the diminution of America’s imperial presence.   People who were relatively unmoved by  geostrategic and moral reasons are  willing to oppose America’s costly empire at  a time when the key concern is how to deal with America’s large and ever expanding debt.  A Pew poll conducted at the end of  May showed that 60 per cent of Americans attribute the increase in national debt  to  the wars in Iraq and Afghanistan, a number that is significantly higher than those  who lay the blame on  domestic spending (24 per cent) or  tax cuts (19 per cent). And 65 per cent advocate reducing U.S. military commitments. [people-press.org/legacy-pdf/]

Although a majority of Americans are now advocating a reduced American presence abroad, much of the establishment has been branding this position with the pejorative term “isolationism.”  [Michael Cohen, “The Return of Non-Isolationism,” July 14, 2011, ]  It is not actually clear what the term “isolationism” actually means except that it connotes something negative.  Obviously, isolationism is not restricted to the complete or nearly complete elimination of all ties with the outside world–political, economic, and cultural.  Only a few countries have ever pursued such an extreme  policy:  for example, China (especially during the Ming  and Manchu dynasties–15th -19th centuries),  the Tokugawa shogunate of Japan (1641-1853), the Hermit Kingdom of Korea in the 19th century.  Those who brandish the term “isolationism,” while not formally defining it, usually apply it to the U.S. stance during the interwar period, in which the country refused to join the League of Nations, and especially to the staunch opponents of  America’s involvement in World War II in the period immediately  prior to the attack on Pearl Harbor.  .

Wayne S. Cole, who until his retirement was the pre-eminent historian of the American “isolationism” of the immediate pre-World War II era, provides the following description of the group commonly designated by that term: “Isolationists did not want the United States to cut itself off from the rest of the world or even from Europe . . . . Central themes in isolationist attitudes were ‘unilateralism’ and ‘noninterventionism.’ As ‘unilateralists’ they opposed ‘entangling alliances.’ They did not believe the United States could prevent wars through cooperation with European states.  They feared that international commitments would involve the United States unnecessarily in the wars that inevitably swept other parts of the world.  They determined to maintain maximum sovereignty and freedom of action for the United States.  Most of them opposed membership in the League of Nations and World Court.” (Cole, An Interpretative History of American Foreign Relations, Homewood, IL., Dorsey, 1968,  pp. 393)

As Cole’s description should make clear, the critics of America’s wars today differ in significant ways from the pre-World War II isolationists.  Primarily, the current critics are not necessarily unilateralist opponents of international political cooperation, and often base some of their criticism of America’s wars on an internationalist standard and how such activities make enemies for the U. S. throughout the world.   It was the Bush administration, in contrast, that took a strictly unilateralist stance in invading Iraq without UN sanction.  And it was the Bush administration that showed indifference to the World Court and international law in its war policy, claiming that its citizens could not be prosecuted by the World Court for any war crimes.

In the mainstream media, the World War II isolationist position is portrayed as self-evidently wrong—selfish, short-sighted, and even, in some cases, treasonous.  As Patrick J. Buchanan points out in A Republic Not an Empire (Washington, DC: Regnery, 1999),  however, this view is not so self-evident, since the results of World War II simply replaced the danger of Nazi Germany with that of the Soviet Union, which in a number of respects  posed an even greater threat to the U.S.  And in terms of morality did the US intervention save lives? This is hardly obvious since millions of innocent civilians were killed in the war and its aftermath and millions more would be forced to live under totalitarian tyranny. [This argument is also made by Bruce M. Russett, No Clear And Present Danger: A Skeptical View Of The United States Entry Into World War II, New York, Harper & Row, 1972 ]

But even if the American isolationists had been wrong about World War II, this would hardly mean that all war interventionism is good.  Was it obviously beneficial for the United States to engage in a ground war in Indochina, invade Iraq and depose the democratic government in Iran in 1953.  Might not a policy of “isolationism” have been preferable in these cases?

Certainly during the latter part of the Cold War, mainstream liberals seriously questioned American interventionist policy.  The slogan of the Democratic candidate for president in 1972, George McGovern, was “Come Home, America.”  Even the architect of the policy of American “containment” of Soviet Communism, George F. Kennan, was highly critical of America’s global implementation of this strategy in areas that went far beyond what he considered America’s vital interests in Europe.  To add a personal note, during my undergraduate and graduate education in the 1960s and 1970s, I don’t recall one professor of history actually praising America’s global interventionism; they differed only in their degrees of criticism of U.S. policy and the motives behind it.

Yale historian Paul Kennedy’s 1987 book “The Rise and Fall of the Great Powers,” popularized the idea of “imperial overstretch” (also known as “imperial overreach”) among the educated public, which holds that an empire can extend itself to the point where it becomes so costly that it eventually overburdens the  economic base of the country, causing national decline. Such imperialist overcommitment, according to Kennedy, had brought about the decline of Spain in the early 18th century and Britain in the early twentieth century and now threatened the United States.  Since Kennedy expressed this view before the United States had begun its wars in the Middle East and Central Asia, one would think that the problem has become considerably worse.  Furthermore, it would seem that  America’s current economic crisis serves to validate this thesis.

Now to underscore the point that I have been attempting to make:   Before the fall of the Soviet Union, even much of mainstream opinion had turned decidedly against America’s global interventionism.  However, after the United States has engaged in destructive wars in Iraq and Afghanistan that have killed and wounded thousands of American soldiers,  killed tens of thousands of innocent civilians, turned  entire regions against the United States and contributed to the near, if not actual, bankruptcy of the US government, mainstream commentators are now ironically warning about the dangers of “isolationism.”   Illustrating this view, David Greenberg wrote in the New York Times:  “A healthy democracy needs critics, particularly when it engages in risky overseas adventures. But the doctrinaire call to drastically scale back our global leadership role has usually led us into error, making the world a more chaotic and dangerous place. Following the path of isolationism today won’t serve America well. Nor will it help the Republicans.”  [David Greenberg, “G.O.P. vs. World,” New York Times, June 29, 2011, ]  Considering the expansiveness of America’s global military presence, warning about the dangers of “isolationism” is tantamount to warning a 400 pound man about the dangers of anorexia when he announces his intention to go on a diet!

To better understand the situation, it would be more appropriate to refer to the critics of American global interventionism as anti-imperialists or anti-hegemonists rather than isolationists. For what America has created is hegemony or an empire. That is certainly how the rest of the world sees America’s global military presence.   And it is exactly what Americans would call comparable activities by other countries.

For example, the United States condemns Iran for intervening in the affairs of  Iraq, including its alleged support for Shi’ite militia groups there.  Iran, of course, borders Iraq and was invaded by it in 1980 in a war that lasted until 1988 in which it suffered heavy losses.  Iran obviously has an important security stake in the internal affairs of Iraq.  In contrast, according to the American view, the United States, although located roughly 8000 miles from Iraq, has a right to invade that country and replace its government with one it considers more palatable..  Similarly, Iran has provided support to  Hezbollah in Lebanon and to Hamas in Palestine to enable them to resist Israel. The U.S. condemns this as aiding “terrorism.”  When the United States has provided aid to innumerable rebel groups throughout the world, it’s presented as aiding “freedom fighters.”   It’s apparent the United States expects Iran to remain isolated within its borders, while the United States sees it to be its right to act as the global hegemon. The United States certainly does not abide by universalist standards.

The elite, including the media elite, are wedded to the existing situation either out of personal interest or by their obeisance to the regnant  ideas.  Neocons and other members of the Israel lobby need an interventionist policy to enhance the security of their beneficiary.  Much of the traditional foreign policy establishment that was cool toward initiating  war in the Middle East nonetheless does not want to draw back from international intervention in general; in fact, its lack of ardor for the war in the Middle East rested on the  belief that such military involvement in that region was detrimental to America’s overall global military presence.    And certainly the military-industrial complex has a definite financial stake in maintaining America’s existing imperial order. Most of the media elite currently repeat the conventional wisdom. .

If these were normal times, it would be highly unlikely that the popular will would overcome this establishment power.  But these are not normal times.  The government cannot simply afford to maintain its global thrust by going farther and farther into debt. The American people along with much of the business community are unwilling to preserve military spending while drastically paring down domestic programs and increasing taxation.  Both the political right and left are looking at the military spending as an area to cut.

In short, the establishment’s desire to preserve America’s globalist imperialism has been mugged by economic reality. This policy cannot be maintained for long  since it must rest on a  strong economic base.  Economic decline, however, does not preclude the U.S. from launching shorter term, shock and awe attacks in the Middle East such as bombing Iran, which would fall short of the full scale occupation of Iraq but could exceed that invasion in terms of intensity.