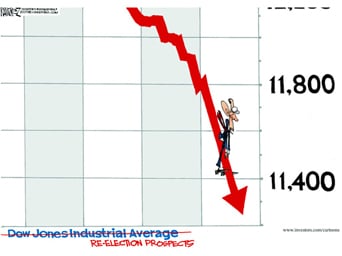 President Obama has tied his administration to the Wall Street crime syndicate and will politically go down with Wall Street as the full extent of America’s economic and moral deficit is finally unveiled. It will eventually be referred to as Obamageddon.

The Rasmussen Reports daily Presidential Tracking Poll for Thursday showed that 20% of the nation’s voters Strongly Approve of the way that Barack Obama is performing his role as president. Forty-two percent (42%) Strongly Disapprove, giving Obama a Presidential Approval Index rating of -22 (the lowest rating of his presidency and a red flag for his re-election prospects.

Obama is paying the political price of his allegiance to an unregulated Wall Street at the expense of Main Street as the economy continues to disintegrate. On November 6, 2009, I wrote a column entitled WALL STREET CRIME SYNDICATE / GOLDMAN SACHS EXPOSED and shared that we are dealing with an Oligarchy, folks ~ the tyranny of the elites with government and Wall Street ruled by the powerful few ~ and the Obama administration is part of it. In other words, Wall Street is the only game in town and it’s crooked! Ben Bernanke is a stooge for the Oligarchy along with former NY Fed chief and present Secretary of the Treasury ~ Tim Geithner.

I used as an example, Greg Gordon, McClatchy News Investigative reporter, who revealed how Goldman Sachs didn’t tell buyers of 40 Billion in toxic Mortgage securities that it was secretly betting the other way with their high flying derivatives ~ standard fare for a Wall Street crime syndicate that was about to become exposed.

But better yet I featured the highly respected Gerald Celente, who pulls no punches, correctly predicting that the political system is failing the America people and that the Banks ( Oligarchy ) are robbing us blind ~ “Worldwide we are being set up for the greatest Depression ~ and here, in the United States, it will be called Obamageddon.”  Here’s Celente’s must see video interview at that time ~ ten minutes Gerald Celente on King World News | Part 1/4

Obama was selected by the Oligarchy or global elite to finish what Bush and Cheney began. The Cheney/Bush administration literally shredded the Constitution with their abuses of power and the Obama administration is in the process of dismantling the Republic. That process has been accelerated with the unconstitutional Super Congress which replaces the representative voices of the people with a gang of six Democrats and six Republicans ~ thus placing more power in the hands of the Washington D.C. power players and thus limiting the power of the average congressman in determining what comes out of the current debt negotiations.

Thus, the voice of the people is effectively subdued and an Imperial presidency, beholden to Wall Street and the global elite, slowly assumes control.

Meanwhile on Main Street, the length of unemployment is an astounding 40 weeks and unemployed workers 55 years and older are paralyzed by fear that they may never work again.

As to the bagman (The federal Reserve) ~ its secretive operations are just now coming to light. The Government Accountability Office (GAO) has released the results of its one-time, limited audit of the Federal Reserve System and the findings were breathtaking ~ with so-called “ money” tossed around like confetti to banksters, foreign banks, and favored corporations. From Dec. 1, 2007 – July 21, 2010, the Federal Reserve “created reserves in the banking system” (Bernanke slang for printing money) that exceeded not only the entire U.S. GDP for a year, but also the entire U.S. national debt accumulated over the past 224 years!

In addition, more than $3 trillion dollars were lent to overseas financial institutions in numerous countries, including in the U.K., Germany, and France. In addition, we learned just how much the big banks who contributed heavily to the financial crisis were rewarded ~ with nearly $8 trillion to banks like Citigroup, Morgan Stanley, Merrill Lynch, and Bank of America.

So what’s going on? It’s a planned demolition of the Republic ( much like the trade towers in 2001 ) where the global elite, fueled by the Federal Reserve, will eventually pick up the pieces of this accelerating depression for pennies on the dollar and Obama will preside over this transition ~ which makes his re-election imperative for his base ~ the Global elite or Oligarchy.

Last Monday and Wednesday’s stock market meltdowns are not because of a justified S&P downgrade from AAA to AA+ but instead the growing realization the rating is not low enough and that the economy is tanking. Peter Schiff got it right in 2008 and he’s right again ~ Video

And finally, Dylan Radigan freaks out on MSNBC and tells the truth ~ Obama needs to find the moral courage to tell the U.S. that Congress is bought ! But what Radigan doesn’t say or realize is that Obama is also bought! He’s doing exactly what the Oligarchy hired him to do ~ don’t rock the boat and maintain the status quo. Must see video ~ Dylan Ratigan with his panel Karen Finney, Susan Del Percio & Jimmy Williams. Speaking with the show panel on the country’s debt and credit rating on Tuesday, MSNBC’s Dylan Ratigan decried economic plans put forth by Democrats and Republicans alike, calling them “reckless, irresponsible and stupid.”

Obama’s lack of moral courage for taking a strong stand for what is right or wrong regarding our economy is not just because of his self imposed calm, pragmatic and unflappable persona, which he feels elevates himself above the conflict and chaos of the masses, but rather his innate fear of failure and offending his uber-wealthy corporate donors ~ which are right now his only true base.

“Few men are willing to brave the disapproval of their fellows, the censure of their colleagues, the wrath of their society. Moral courage is a rarer commodity than bravery in battle or great intelligence. Yet it is the one essential vital quality for those who seek to change a world which yields most painfully to change.” – Robert F. Kennedy