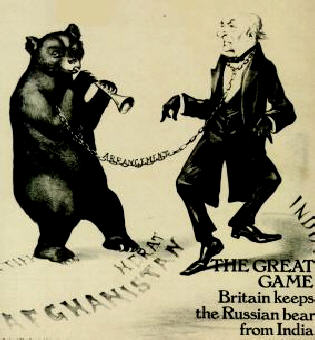 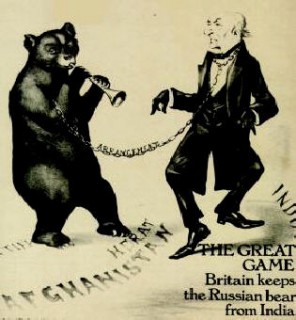 For nearly a century the two most powerful nations on earth-Victorian Britain and Tsarist Russia –fought a secret war in the lonely passes and deserts of central Asia. Those engaged in this shadowy struggle called it ”The Great Game” the vast chessboard on which this shadowy struggle for political ascendancy took place stretched from Caucasus in west to Tibet in east .The focus on energy and mineral rich south Asia has thus been there for centuries.

The geographical location of Pakistan makes it the most important country in the present politics of the region. Pakistan forms a natural bridge for any economic activity between this region and the outer world. The statement of US Senator John McCain despite existing tense relationship reflects the version of most of the world leaders he said ‘I think it is very clear — it is clear at some level there is a relationship there…. So, our options are very limited. But we try to assist them — the other options are not really viable. For a ten year period we cut off relations with Pakistan, things got worse. And so to do that obviously would not be the answer’.

Any strategy for this region cannot move forward without addressing the concerns of Pakistan. Today this region passes through grey fog of psychological warfare. It has become difficult to find a line between opposites like friend and foe. Understanding of the complete mosaic is only possible through analysis of the last three post bipolar world decades. An in depth study shows that the New World Order has completely changed the ethics, lifestyles and rules of the game. It is not only the democratic values which have changed but the international rules of the foreign policy have undergone a sea change.

Freedom movements of one decade have become terrorist activity in the other. Talibans the friends to defeat Russia are now in the list of terrorists. New jargons like double standards, mistrust, covert operations have dominated so much that even at times the red lines for national sovereignty have become flexible.

Pakistan finds itself in the most difficult challenges since its birth. Abrupt changes may not be that grave issue for a super power but for a third world country like Pakistan the changes do require a smooth transition period. The long paces are feared to leave spaces for the hostile forces, the forces which never accepted Pakistan as a sovereign state. The old policies of supporting freedom struggles by India in Pakistan, Sri Lanka, and other regional countries and the support for IHK by Pakistan find difficulty to fit in present regional situation. However, the dynamics foresee more regional destabilization in case of abrupt rapid and unplanned switchovers which must be understood by regional and global players.

The freedom fighters and their supporters working on an ideology need a certain space and direction to tailor themselves according to emerging realities. Haste and pressure in wrong direction may turn them into terrorist supporters and play catalyst for destabilization in this region.

The organization like Lashkir-e-Tayiba (LeT) and Jamat ud dawa (JUD) are a classical case study in this perspective. Let was raised in 1984 in Kunar by Hafiz Saeed and

Zaki ur Rehman Lakhvi. They fought side by side against Russian occupation of Afghanistan. This occupation was a prelude to Russian desire of reaching the warm waters and next phase had to move through Pakistan. The US – Pak National interests coincided and full support was provided to this organization. In the aftermath of success US left Pakistan at its own to deal with such organizations. LeT a small organization of about 4000 odd members decided to support oppressed Muslims of Indian held Kashmir (IHK).

Pakistan also did not check them as it provided a counter to Indian interference in its neighbours. 9/11 decade brought yet another change in foreign relations and the New World Order rejected all such movements and linked them with Alquida (ALQ), US declared LeT as Foreign Terrorist Organisation (FTO) in 2001 and Pakistan banned its activities in 2002 .  Where it was easy decision for US, Pakistan which had to implement had to face enforcement problems as the region went into destabilization mode due to 9/11. Pakistan’s take from here on followed a systematic approach to shift the orientation of modest faction of this organization towards welfare of countrymen and take strict actions against hard liners after 26/11 at Mumbai. Zaka ur Rehman Lakhvi was arrested and is presently under going trial in ATC.

A source close to a senior official dealing with the issue disclosed that firm measures have been taken and after 2005 it is being ensured that the hard line faction does not get any support to further its activities. He also told that the this faction has lost its potency to a great extent due to arrest of its leaders. According to his assessment widely publicized linkage between Alquida is a perception spread by interested players as they belong to Ahle Hadees group which is ante to Deobandis of Alquida therefore their close working is out of question.  Such measures are forcing hard liners to join the moderate group.The moderate faction ,  Jamat ud Dawa (JUD) under  Hafiz Saeed who publically condemns Mumbai attacks  runs 163 schools and 4 colleges for almost 44000 students. In health sector it provides 6 hospitals , 153 dispensaries and 150 ambulances. Its contributions in floods and earthquake are recognized by the world. This organisation remains committed to support Kashmiri struggle on diplomatic fronts.

While Pakistan fights its war of survival the hostile countries take this as an opportunity to malign Pakistan and isolate it from its friends. The National interests in this decade may not seem to coincide with same fervor but future of region still strongly hinges on a stable Pakistan. The mindset has to change if nations are serious in defeating not only the terrorists, but also the nations behind them. In its efforts to minimize implosions Pakistan moves forward for more stability by signing of extension of political parties order in FATA to bring FATA into mainstream politics and efforts by Gen Kiyani to reach out to deprive balochs. Pakistan needs regional and global support and understanding at this crucial stage. The regional and global success passes through Pakistan and if this bridge collapses the repercussions will be felt by the entire world.  As Pakistan celebrates its independence day more than anything it needs is a sincere understanding  of its problems and opportunities from within and from the international community. HAPPY BIRTHDAY PAKISTAN