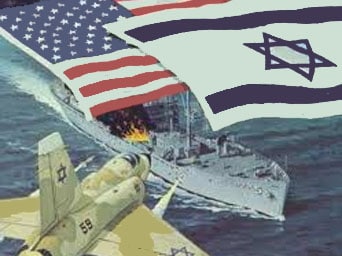 At the site, Toenjes will be holding a memorial service honoring those killed on the USS Liberty by the Israeli military.

Larry Toenjes, 74, from Clear Lake Shores, Texas, is sailing his 39-foot sailboat, the s/v Liberty, to the coordinates of the June 8, 1967 Israeli attack on the USS Liberty that killed 34 sailors and wounded another 173. 207 were killed or wounded out of the 294 on board the USS Liberty in the 90 minute attack by strafing attack planes and torpedoes.  At the site, Toenjes will be holding a memorial service honoring those killed on the USS Liberty by the Israeli military.

Toenjes and Joe and Sherrie Wagner, his 2 person crew also from Texas, set sail from Texas in July.  They have sailed over 7,000 miles and are currently in Malta.  According to Joe Meadors, the President of the USS Liberty Veterans Association (www.usslibertyveterans.org), Toenjes has Egyptian government permission to travel in Egyptian territorial waters to the site of the attack.

Toenjes said: “I do not intend to go near Gaza.  All I intend to do is exercise my right as an American citizen to proceed to a point in international waters where a grave injustice was perpetrated against US sailors and express my dismay that that injustice is being extended by the failure of Congress to have the “courage” to listen to what these men have to say.   Members of Congress never seem to miss an opportunity to say to a service man or woman, “We thank you for your service!” It seems, however, that their service is not to be acknowledged if it would have the effect of embarrassing the State of Israel and the pro-Israel Lobby here in the US.”

US Embassy Refuses to Send a Delegation to the Ceremony

Meadors has been assisting Toenjes in getting the US Embassy in Tel Aviv to be concerned about the safety of Toenjes.  He said the US Embassy in Tel Aviv has been invited to attend the ceremony but that representatives have refused to send an official delegation to rendezvous with the s/v Liberty and attend the memorial service because “they cannot find a single vessel in all of Israel that is capable of making the trip.”

Meadors added, “You know as well as we do that the last thing the US government wants to do is to send an official to attend a memorial service honoring the 34 of our shipmates who were killed in action during the attack on the USS Liberty  (because of the U.S. Government cover-up of the Israeli attack).  We want the Naval Attaché to convey to American Embassy officials in Israel that their refusal to attend the memorial service for Americans who were killed on the USS Liberty is unacceptable and not in keeping with the way America treats its honored dead.”

Meadors said that he also has invited the Israeli Defense Forces (IDF) to send an official representative to attend the memorial service.

On August 10, 2011, Meadors wrote an extensive letter to Assistant Naval Attaché Lieutenant Commander Jason K. Edgington at the US Embassy in Tel Aviv, Israel giving details of the Israeli attack on the USS Liberty 44 years ago and his concern for the safety of Larry Toenjes. 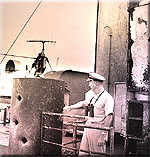 Given our history with the US Navy, the US government and the Israeli government I’m sure you will understand when I tell you that your reassurances do nothing to quell our concerns for Larry’s safety and the sanctity of the memorial service for our fallen shipmates.

If you will recall your US Navy history you will remember that our skipper, Capt. McGonagle, recognized the potential danger involved in working at the station to which we were sailing.  He asked the Sixth Fleet for a destroyer escort but that request was denied because we were “a clearly identified US Navy ship.”

Further, the Israeli government did not issue any NOTMARS to inform ships sailing in the area of any danger.

When we were attacked, two flights of Sixth Fleet aircraft that had been launched to come to our assistance were both recalled while we were still under attack and calling for help which allowed the Israelis to continue their attack for over an hour more unhampered by the threat of Sixth Fleet intervention.  To this day the US government has refused to conduct an investigation of the attack on our ship despite accounts of USS Liberty survivors telling them that we were attacked by unmarked aircraft, that our radios were jammed on both US Navy tactical and international maritime distress frequencies, that our life rafts were deliberately machine gunned in the water and that the torpedo boats slowly circled our burning and torpedoed ship while firing from close range at Liberty crewmen who ventured topside to help our wounded shipmates.

More information about the attack on our ship is available at usslibertyveterans.org files/Docs.pdf.  I would like to specifically direct you to the War Crimes Report we filed with the Department of Defense (DOD).

To date they refuse to investigate the allegations contained in that report and they refuse to send a spokesperson to USS Liberty reunions to explain their actions vis-à-vis our War Crimes Report. 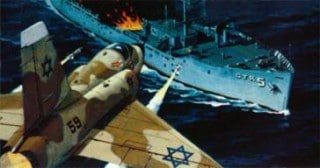 Just this year the Israelis intercepted, boarded and impounded the French ship Dignite as it participated in Freedom Flotilla 2.  That was done in international waters well clear of the coordinates provided by the Israelis for their blockade of Gaza and very near to the coordinates of the attack on the USS Liberty.  They did this without issuing any NOTMARS closing the area.

That said, I am sure you will understand that your reassurances to the contrary we do not have any confidence whatsoever that Larry will be allowed to proceed to the coordinates and conduct the memorial service absent any harassment from the Israeli government.  Despite his being well outside the area defined by the Israeli government as the boundaries of their blockade of Gaza and despite the s/v Liberty being a US flagged and registered vessel he will be harassed by the Israeli Navy to the extent that his vessel will be boarded and impounded by the Israeli Navy and the US government will do absolutely nothing either to prevent it or to assist Larry in getting the Liberty released from Israeli custody.

In closing, let me respectfully submit that the reason I believe the US government will not provide an official to represent them during the memorial service is not because they cannot find a single vessel in all of Israel capable of making the trip as they claim but because they know the s/v Liberty will be intercepted, boarded and impounded by the Israeli Navy (even in Egyptian waters).

Meadors asked that concerned citizens call US Embassies in Tel Aviv and Cairo and the State Department in Washington, DC (travel.state.gov/travel/tips/emergencies/emergencies)with their demand that the United States protect US citizens sailing in international waters.

The Israeli military’s history of attacking ships in international waters extends from 1967 to the present.  In 2009, 2010 and 2011, a vessel carrying a Nobel Peace Laureate and a US Congresswoman was rammed and seriously damaged.  Six ships in the 2010 Gaza flotilla were attacked with eight Turkish citizens and one American citizen executed by Israeli commandos and over 50 wounded.

A seventh ship in June, 2010 was attacked, as well as another boat in September, 2010.  In April, 2011, a cargo ship came under a barrage of bullets from the IDF, but, with the help of the Egyptian navy returned into Egyptian waters.

In June, 2011, one ship out of ten in the Gaza flotilla escaped the Israeli diplomatic offensive that resulted in a Greek government ban on ships sailing from Greece to Gaza.  It was forcefully boarded by the IDF and taken to the Israeli port of Ashdod.

Toenjes and Meadors will update us as the s/v Liberty sails for the site of the Israeli attack on the USS Liberty.

About the Author:  Ann Wright is a 29 year US Army/Army Reserves veteran who retired as a Colonel and a former US diplomat who resigned in March, 2003 in opposition to the war on Iraq. She was an organizer of the 2011 US Boat to Gaza, “The Audacity of Hope” and was on the 2010 Gaza flotilla that the Israeli military attacked and killed 8 Turkish and 1 American citizens and wounded 50.  She is the co-author of the book “Dissent: Voices of Conscience.” www.voicesofconscience.com.