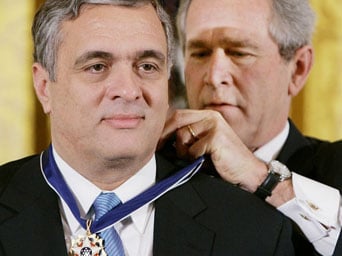 Last week, conspiracy buffs were given a magic revelation regarding 9/11.  Richard Clarke pointed the finger at former CIA director, George Tenet, declaring the CIA “allowed” the 9/11 hijackers to operate freely.

The rationale?  Tenet and the CIA had plans to use “them” in some way, maybe turn them into secret double agents, even triple agents.  What’s wrong with this picture?

I feel as though I had stepped back into time.

The Famous Rifle That the Public Knows So Little

Notwithstanding the broken rifle with the loosened scope or Oswald killing a police officer with a revolver that discarded shell casings of a different caliber as though it were an automatic (Colt .38 “Super” semi-automatic pistol) reselling the “lone gunman” myth continues.

Now we are trying the same with 9/11.  Can I say “notwithstanding” again?

Even if someone were to believe thousands of tons of steel vaporized magically with a few gallons of kerosene, the “twin towers” story, 9/11 fell apart years ago when the Commission itself distanced itself from their own findings as a “whitewash” and “fraud.”

Then hard, irrevocable facts came in, Building 7 was ordered destroyed, something requiring months of preparation but done with 20 minutes notice.

The other weak link, the Pentagon, a missile attack, no aircraft could have done it, long proven, no pilot capable, no plane could have survived it, no wreckage one day and a few “pristine” pieces the next.

Past this we learned that the flight 93 drama, the calls, the storming of the cockpit, all made up, no calls were made, all a story.

More seriously, the idea of hijackers fell apart also.  There was no proof they existed other than a few pieces of obviously planted evidence and wild claims never backed up by hard evidence.

There were no hijackers, no box cutter armed Arabs with “Cessna” training flying better than Top Gun instructors. It was all made up, every bit of it.

[Editor]:  Here is a good recap video. Be sure to select the 360 resolution for much better clarity.

After ten years of lies, of torture, of trillions of dollars stolen, of America in Afghanistan in the biggest drug cartel ever dreamed of, ten years of fairy stories and now, all of a sudden, Richard Clarke, infamous weakling and “mama’s boy” points the finger at George Tenet.

The CIA director was always hated by the Bush White House, someone kept in the dark, pushed aside by Cheney and his “privatization,” the perfect dupe.

With the ten year anniversary coming up, increasingly Israel’s hand is seen in 9/11, not just from conspiracy websites or “Jew haters” but from top analysts.

The “fall back” story Israel uses is that they had agents all over the US who were “shadowing” the hijackers while others, team after team, were in New York, admittedly informed in advance of the attacks, “documenting.”

Then we have Richard Clarke, years later, talking about hijackers again, the imaginary box cutter story, the phone calls that never happened, the magic pilots, the impossible planes.

Normally, stories like this, stories providing cover, “game theory” stories, come from Julian Assange and Wikileaks.  Always the same, a spoonful of sugar makes the medicine go down.  Wikileaks?

Peddling Israeli plots against Iran and Pakistan using dirt gathered on the United States, no difficult task there, carefully “seeded” as Zbigniew Brzezinski call it back in December 2010, with “pointed” information from an intelligence agency.

Wikileaks is Mossad and Wikileaks “friends” are “hasbara,” the helpers who serve Israel’s intelligence services.

But Wikileaks “crashed and burned,” so obvious they became a joke.

Now all that is left to sell the hijacker/box cutter story is weakling Richard Clarke, a minor figure, we are told, in the planning of 9/11, a White House “gofer” pointing his finger at poor George Tenet, the CIA director who never directed the CIA.

All of this, of course, is cheap theatre, cover for Israel, cover for Bush, cover for Cheney and Rumsfeld, for Rove and Ashcroft, for Gonzales, for Mike Harari. [Editor note: Notice how wikipedia does not have a photo of him on this page, when they are available and they have them on eveybody else’s pages.]

Using Clarke, “Mr. Small Potatoes,” to peddle poor George Tenet as mastermind of the crime of the century, all I can say is “Good luck with that.”

***[Editor’s Note]  We will close with an example of just one of the many little missing pieces of past events which are hiding in plain sight in terms of the public’s general knowledege. How many of you have even seen or heard of Oswalk’s fake Selective Servid ID? Let us know in the comment section. We need your feed back. Thanks. 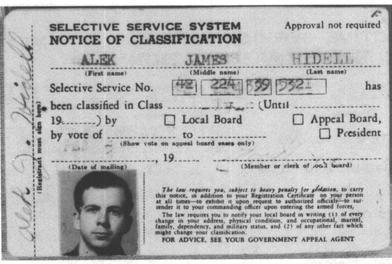 Fake selective service (draft) card in the name of Alek James Hidell, found on Oswald when arrested. A.Hidell was the name used on both envelope and order slip to buy the alleged murder weapon (see CE 773), and A. J. Hidell was the alternate name on the New Orleans post office box rented June 11, 1963, by Oswald. Both the alleged murder weapon and the pistol in Oswald’s possession at arrest had earlier been shipped (at separate times) to Oswald’s Dallas P.O. Box 2915, as ordered by “A. J. Hidell”.