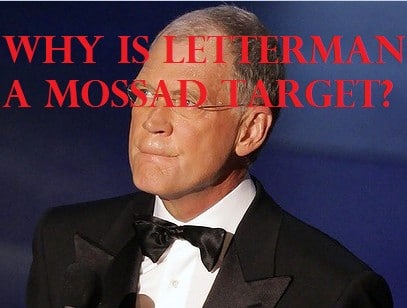 The threats made against David Letterman I know nothing about other than the email I got from Eddieleaks telling me they came from Rita Katz.  Did poor David Letterman do something to Israel?  Threats passed on like this one, are really “backhanded reminders” that something asked of them by the all powerful Israeli lobby or ADL wasn’t jumped on quickly enough, reminders done in the style of “Al Capone.”

Why Letterman?  I don’t have a clue.  Some say it may be his endorsement of Ron Paul for president, a move that angers Muslims because of Paul’s calls for a new 9/11 investigation.  Wait a minute, wouldn’t that anger Israelis instead?

But as to the source, please refer to this 2009 VT expose with research done by Brian Jobert.

Start by watching the video below, a Fox News broadcast.  Fox says it is Palestinians celebrating the 9/11 attacks.  In fact, the video is older (1991), a simple holiday celebration unrelated to anything, supplied by Israeli intelligence just as the stories about Saddam and the poor babies in Kuwait, you remember, the ones taken from their incubators?

This one, perhaps one of the most vicious propaganda attacks on the US ever made, pure racism, pure Islamophobia, came from Rupert Murdoch and the same folks who invented the threat against David Letterman.  This video makes up one small piece of evidence leading investigators to Tel Aviv when looking for the real perpetrators of the 9/11 attacks.  You see, this video was prepared and passed on to Fox News prior to 9/11.

Who says Al Qaeda takes credit for a bombing? Rita Katz. Who gets us bin Laden tapes? Rita Katz. Who gets us prettymuch all information telling us Muslims are bad? Rita Katz? Rita Katz is the Director of Site Intelligence, primary source for intelligence used by news services, Homeland Security, the FBI and CIA. What is her qualification? She served in the Israeli Defense Force. She has a college degree and most investigative journalists believe the Mossad “helps” her with her information. We find no evidence of any qualification whatsoever of any kind. A bartender has more intelligence gathering experience.

(Another big SITE Intelligence/Mossad project, their “Al Qaeda”spokesman discovered to be an Israeli)

Nobody verifies her claims. SITE says Al Qaeda did it, it hits the papers. SITE says Israel didn’t do it, that hits the papers too. What does SITE really do? They check the internet for “information,” almost invariably information that Israel wants reported and it is sold as news, seen on American TV, reported in our papers and passed around the internet almost as though it were actually true. Amazing.

Do we know if the information reported comes from a teenager in Seattle or a terror cell in Jakarta? No, of course not, we don’t have a clue. Can you imagine buying information on Islamic terrorism from an Israeli whose father was executed as a spy by Arabs?

It is quite likely that everything you think you know about terror attacks such as the one in Detroit or whether Osama bin Laden is alive or dead comes from Rita Katz. Does she make it all up? We don’t know, nobody knows, nobody checks, they simply buy it, print it, say it comes from Site Intelligence and simply forget to tell us that this is, not only a highly biased organization but also an extremely amateur one also.

Is any of this her fault, Ritas? No. She is herself, selling her work. The blame is not Site Intelligence, it is the people who pass on the information under misleading circumstances.

Imagine if a paper carried a story like this:

Reports that Al Qaeda was responsible for bombing the mosque and train station were given to us by an Israeli woman who says she found it on the internet.

This is fair. Everyone should be able to earn a living and information that comes from Israel could be without bias but the chances aren’t very good. In fact, any news organization, and most use this service, that fails to indicate that the sources they use are “rumored” to be a foreign intelligence service with a long history of lying beyond human measure, is not to be taken seriously.

Can we prove that SITE Intelligence is the Mossad? No. Would a reasonable person assume it is? Yes.

Would a reasonable person believe anything from this source involving Islam or the Middle East? No, they would not.

SITE’s primary claim to fame other than bin Laden videos with odd technical faults is their close relationship with Blackwater. Blackwater has found site useful. Blackwater no longer exists as they had to change their name because of utter lack of credibility.

What can be learned by examining where our news comes from? Perhaps we could start being realistic and begin seeing much of our own news and the childish propaganda it really is.

1. It makes up phony reasons to justify acts of barbaric cruelty or insane greed.

2. It blames people for things they didn’t do because the people doing the blaming really did it themselves. We call these things “false flag/USS Liberty” incidents.

Next time you see dancing Palestinians and someone tells you they are celebrating a terror attack, it is more likely they are attending a birthday party. This is what we have learned, perhaps this is what we had best remember.

From an AFP article on Site Intelligence:

Rita Katz and S.I.T.E. are set to release yet another “aL-Qaeda” tape

Despite a massive manhunt by the world’s intelligence agencies, BL seems to evade their combined efforts, staying on the run. But he still has time to drop into his recording studio and cook up a fresh tape for the likes of Rita Katz and her outfit called S.I.T.E. SITE is staffed by TWO people, Katz and a Josh Devon.

WASHINGTON (AFP) The head of the Al-Qaeda network Osama bin Laden is expected to release a taped message on Iraq, a group monitoring extremist online forums said Thursday. The 56-minute tape by the hunted militant is addressed to Iraq and an extremist organization based there, the Islamic State of Iraq, said the US-based SITE monitoring institute, citing announcements on “jihadist forums.”

It said the release was “impending” but did not say whether the message was an audio or video tape. Despite a massive manhunt and a 25-million-dollar bounty on his head, he has evaded capture and has regularly taunted the United States and its allies through warnings issued on video and audio cassettes.

Yes, despite a massive manhunt by the world’s intelligence agencies, BL seems to evade their combined efforts, staying on the run. But he still has time to drop into his recording studio and cook up a fresh tape for the likes of Rita Katz and her outfit called S.I.T.E. SITE is staffed by TWO people, Katz and a Josh Devon.

Yet these two individuals manage to do what the ENTIRE combined assets of the world’s Western intelligence can’t:

Be the first to obtain fresh video and audio tapes from aL-Qaeda with Bin Laden making threats and issuing various other comments. If BL appears a bit “stiff” in the latest release, that’s because he is real stiff, as in dead.

How is it that a Jewish owned group like S.I.T.E. can outperform the world’s best and brightest in the intelligence field and be the first to know that a group like al-Qaeda is getting ready to release another tape?

How is it possible that Rita Katz and S.I.T.E. can work this magic? Maybe looking at Katz’s background will help:

Rita Katz is Director and co-founder of the SITE Institue. Born in Iraq, her father was tried and executed as an Israeli spy, whereupon her family moved to Israel [the move has been described as both an escape and an emmigration in different sources]. She received a degree from the Middle Eastern Studies program at Tel Aviv University, and is fluent in Hebrew and Arabic. She emigrated to the US in 1997.

Katz was called as a witness in the trial, but the government didn’t claim she was a terrorism expert. During the trial it was discovered that Katz herself had worked in violation of her visa agreement when she first arrived in America in 1997.

She also admitted to receiving more than $130,000 for her work as an FBI consultant on the case.

Sanner commended the department for its commitment in helping the MDA in its battle to eradicate neuromuscular diseases. site muscular dystrophy association

West Carrollton firefighters “have been long-time friends and supporters of the Muscular Dystrophy Association,” said Sara Holtz, a spokesman for the nonprofit. this web site muscular dystrophy association

She pointed to the department’s consistent participation in the Fillthe-Boot drives , during which West Carrollton firefighters, since 1954, have raised more than $320 million for MDA.

As for the department’s new fire engine rolled out during the event, it replaces the department’s 23-year-old Emergency One pumper truck, which will be sold on a government surplus site at www.govdeals.com.