Home World Turkey plans diplomatic assault on Israel after its refusal to apologize for...

Israel will stick to its decision not to apologize to Turkey over the May 2010 raid of a Gaza-bound Turkish ship, despite a direct request from the United States. 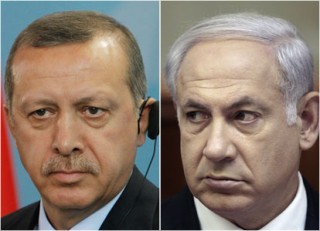 Senior official in Jerusalem says decision not to apologize at this point was primarily to allow a UN report on the raid to be released.

Turkey plans to launch a diplomatic and legal assault on Israel after Prime Minister Benjamin Netanyahu refused on Wednesday to issue an apology to Turkey for the raid on the Gaza aid flotilla last year in which nine Turkish pro-Palestinian activists were killed.

Sources in the Foreign Ministry said Turkey now intends to implement “Plan B”, which will include an anti-Israel campaign in UN institutions, with an emphasis on the International Court of Justice. Turkey also plans to encourage the families of the raid’s victims to file suits against senior Israeli figures in European courts.

Netanyahu told U.S. Secretary of State Hillary Clinton in a phone call Tuesday night that Israel would not be issuing an apology, and this means the United Nations report on the events of May 31, 2010 can be expected to be published next Tuesday.

The release of the report, compiled by a committee headed by former New Zealand Prime Minister Geoffrey Palmer, had been delayed several times as Israel and Turkey tried to repair relations between them.

A senior official in Jerusalem who was involved in the talks with Turkey in recent months said that the decision not to apologize at this point was primarily to allow the UN report to be released.

It has been widely reported that the document upholds the legality of Israel’s blockade of Gaza, while criticizing Israel for using disproportionate force in the raid.

“The report gives a lot of support to Israel, even though there was also criticism, and [the report] is very bad for Turkey,” the senior official said.

“We aren’t closing the door. After the report is released and we get some diplomatic and public diplomatic benefit from it, we can return to the negotiating table with Turkey under improved conditions, and then the whole issue of the apology will be viewed differently,” the official said.

He noted, however, that the Turks, who object to the report’s conclusions, are expected to become more entrenched in their positions, while Netanyahu would have a hard time apologizing after the UN report recommends merely expressing sorrow.

Over the past several months, the United States put enormous pressure on Israel and Turkey to formulate a way to mend the rupture between them. Both Clinton and U.S. President Barack Obama had been personally involved in the effort; in a meeting with President Shimon Peres in Washington a few months ago, Obama had said Israel should “go the extra mile,” and apologize to Turkey.

But Netanyahu, who in recent months had hinted to the Americans that he would consider apologizing, told Clinton on Tuesday that he could not do so out of coalition considerations. Both Foreign Minister Avigdor Lieberman and Strategic Affairs Minister Moshe Ya’alon had opposed an apology, believing it would be humiliating and a capitulation to terror that would send the wrong message to the Turks.

“Apologizing to Turkey would have caused Israel strategic damage in the region,” Ya’alon said Wednesday.

A senior Jerusalem official said Netanyahu also told Clinton he was refusing to apologize because he wasn’t prepared to be dictated to.

“I agreed to express regret and to pay compensation, but an apology won’t restore the relations with Turkey to what they were before in any case,” he was quoted as saying.

Meanwhile, Israeli Ambassador to Turkey Gabi Levi is completing his term in three weeks, and no replacement has been named for him, either. The reason is that Jerusalem fears Turkey will not agree to accept a new ambassador, a move that would also indicate a downgrading of relations.

Erdogan is considering making a visit to Gaza, during which he could be expected to condemn Israel and declare his support for Hamas. The Turkish government is also expected to help Palestinian Authority President Mahmoud Abbas obtain international support for UN General Assembly recognition of a Palestinian state in September.

A senior government minister, meanwhile, said that one reason for Netanyahu’s decision was the results of a poll he received in recent days that showed broad public opposition to an apology.

“Netanyahu is dealing now with the social protest, which has affected his political standing,” the minister said. “He didn’t want to open another front with the public.”

The Prime Minister’s Office vehemently denied this, saying no poll had been taken and that this was a lie bordering on libel.

Barak Ravid is the diplomatic correspondent for Haaretz newspaper. He joined Haaretz in April 2007, covering the Prime Minister’s Office, the Foreign Ministry and the Ministry of Defense, dealing with issues such as U.S.-Israeli relations, EU-Israeli relations and the peace process.

Before joining Haaretz, Barak Ravid worked for two years for Maariv daily newspaper, spending a year covering the Palestinian Authority and a year as a diplomatic correspondent.

Ravid has a BA in the history of the Middle East from the University of Tel Aviv. He served for six years as an officer in the Israel Defense Forces, and concluded his service with the rank of captain. He and his wife live in Tel Aviv.