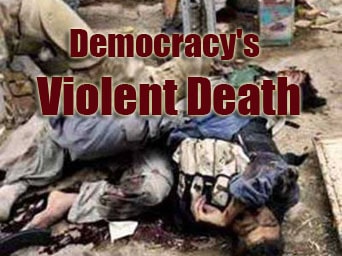 The USA converted, in practice, from a republic to a democracy during the reign of FDR. Without a miraculous change of course, our democracy’s brief life is almost over and its violent death is imminent.

“Democracies have ever been spectacles of turbulence and contention; have ever been found incompatible with personal security or the rights of property; and have in general been as short in their lives as they have been violent in their death.”

In a press conference Oct. 29th, 2009, Nancy Pelosi was reportedly asked a question by a reporter: “Madame Speaker, where specifically does the Constitution grant Congress the authority to enact an individual health insurance mandate?” 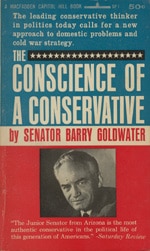 Barry Goldwater’s 1960 book, THE CONSCIENCE OF A CONSERVATIVE, expressed what’s now deemed a “radical” idea. Goldwater asserted that the first question a Congressman should ask about any proposed bill is NOT whether or not it is a good idea. The first question should be: “Does the Constitution authorize Congress to act?”

Since Goldwater left the Senate, flagrant trampling of the Constitution proceeds virtually unquestioned. Ron Paul is treated as a wacky radical for objecting.

The current Congress is continuing the open contempt for the Constitution demonstrated since the FDR period through LBJ to the present day. The D.C. Leviathan and our national debt are growing faster than kudzu on a manure pile in a rainy July.

It’s high time for the Enumerated Powers Act as proposed by Rep. John Shadegg (R, AZ). But if the Congress ignores the Constitution, should we believe they would obey statutory law?

The Constitution gave us the blueprint for a republic, not a democracy. It’s an important distinction. The Constitution’s focus and purpose was to limit government, specifically, what the central government may or may not do. Its fatal flaw is that it requires a virtuous and moral people.

“We have no government armed with power capable of contending with human passions unbridled by morality and religion. Avarice, ambition, revenge, or gallantry, would break the strongest cords of our Constitution as a whale goes through a net. Our Constitution was made only for a religious and moral people. It is wholly inadequate for the government of any other.” –John Adams, 11 October 1798

John Adams noted that our Republic was designed and fitting only for a moral people. Moral people do not approve when government steals from some citizens in order to give benefits to others. Theft is always wrong, even when the government does it under the guise of “benevolent” purposes.

The Founders were very wary of “democracy” for they knew it always led to a tyranny of the majority. Thomas Jefferson expressed the beliefs of many of the Founders this way, “A democracy is nothing more than mob rule, where fifty-one percent of the people may take away the rights of the other forty-nine.”

Our pretense as a nation under the Rule of Law is a farce. We are, at best, a mob rule democracy…on our way to the absolute tyranny

we so richly deserve. As H.L. Mencken once wrote, “Democracy is the theory that the common people know what they want, and deserve to get it good and hard.”

The Founders provided a very specific—and onerous— amendment process for the Constitution. that process requires deliberation and overwhelming majority approval, not only in D.C., but also in three quarters of the State capitols.

The process was made onerous in order to check runaway passions and popular fads from leading to a tyranny of the majority. The process also was made deliberate to force proposed changes to be visible, understood as departures from the original intent, and open to debate.

The States once had nullification and other checking powers but all those were destroyed (in practice) in Lincoln’s war. The 14th Amendment was never properly ratified but was declared so anyway.

The 16th Amendment (income tax), the establishment of The Federal Reserve and the 17th Amendment neutered the States and released the D.C. Leviathan to grow out of control.  Until The Fed and these Amendments are addressed, suggests Thomas DiLorenzo, we are stuck in a situation best described as “Constitutional Futility.”

In his speech to Virginia’s ratifying convention, James Madison said:

“Liberty lies in the hearts of men and women; when it dies there, no constitution, no law, no court can save it…”

What comes next is, as Mencken said, we “deserve to get it good and hard.”

Steve Scroggins brings a variety of talents to Veterans Today… management/accounting/MBA background, computer systems analyst, IT management, and as a web administrator for the past ten years. Along the way he has been very active in a variety of American heritage orgs, an historian and prolific writer featured on the Georgia Heritage Council website along with his infamous satirical X-files cartoons. Steve will be a great addition to the in-progress mulitmedia upgrades for VT. He will be working with Jim W. Dean on several major article series to completely expose some of the major myths and myth-makers who have gotten a free pass from so-called mainstream media.