Home Government Ron Paul Won’t Go Away – Nor Should He 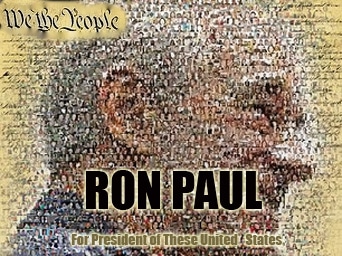 With a long list of corporate and Wall Street lackeys, including President Obama, running for President in 2012, Ron Paul continues to represent Main Street and a tattered constitution in his quest for the presidency ~

Last week was a good birthday week for Ron Paul: a statistical tie at the Ames Straw Poll in Iowa last Saturday, a thousand New Hampshire voters at the Concord, New Hampshire office opening Wednesday night, and on Saturday, a resounding victory in the New Hampshire Young Republicans Straw Poll in New Castle and a money bomb of well over 1.5 million dollars raised for his campaign on his birthday, August 20th.

The defining traits of our next president should be integrity, character and principle, not whether he is a Democrat or Republican. As such, I believe our next president should be 12 term Texas congressman Ron Paul. As a progressive and former 2008 Obama supporter ~ I would vote for Ron Paul in a heartbeat over Obama in 2012 for those very reasons.

I am one of millions of Americans who want to vote for a man of integrity and clear principles in 2012 versus a shill for Wall Street and the corporate elite. However, the corporate controlled main stream media is well aware of the Ron Paul populist threat ~ which is why they either ignore or belittle his candidacy.

Now watch All Of Ron Paul’s Questions & Answers at the Iowa GOP Debate of 8/11/11 ~ where Paul talks about our failed monetary system, the need to bring the troops home, the Federal Reserve, Iran, the rules of law, constitutional principles and in the process, he makes the other candidates, particularly Santorum and Bachmann, look silly or presidential pretenders.  15 minute video ~

When Paul was recently asked If he felt the media was treating him unfairly ~ Paul correctly responded: ‘Sure. Yeah, they are and we need to ask them why,‘ he replied. ‘I mean, what are they afraid of? We’re doing well, we’re certainly in the top tier, we did well in Iowa and we have a good organization, we can raise money. But they don’t want to discuss my views because I think they’re frightened by us challenging the status quo … because my views are quite different than the other candidates’, so they would just as soon us not get the coverage the others are getting and they will concentrate on establishment-type politicians.’“

Once again, Ron Paul is the only credible non-establishment and non-status quo candidate in the 2012 Presidential sweepstakes ~ which makes it obvious that Ron Paul must not go away and that his honest and prophetic voice continue to be heard and listened to throughout this next election year.
Please watch this moving 30 minute video of Ron Paul’s The Revolution & The Anti-War Movement. Click to view

IMAGINE WHAT KIND OF SCUMBAG COULD WORM HIS WAY TO THE TOP OF A LIST THAT LONG?