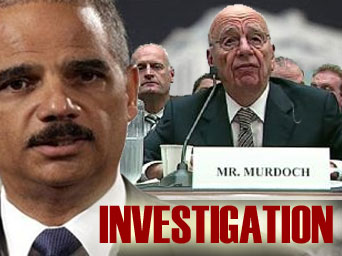 Lawyers representing the families of the 9/11 dead have requested a criminal investigation, here in the US, against News Corp, Fox News and its affiliates including the New York Daily News and Wall Street Journal.

Their charge?  That these publications, controlled by Rupert Murdoch, wiretapped families of 9/11 victims, tapped their home computers, violated their basic human rights in order to secure stories of “human interest.”

Requests have been made for law enforcement authorities to review all news stories in and around the 9/11 tragedy for signs of specific information that could only have been gleaned through illegal and reprehensible means.

More interestingly to the point, it was the Fox network that, last year, broke the story, through its Freedom Watch series, Judge Napolitano and through Fox jouralist Geraldo Rivera, that raised serious doubts as to the findings of the 9/11 Commission and the real possibility that the US government and “others” may well have been fully complicit in the perpetration of the crimes themselves.

However, after airing these startling expose’s Fox suddenly “dead ended” its efforts without notice, almost as though none of it really happened.

The reasons for the sudden silence from Fox is obvious.  The trail led to themselves, not just abuses of the victims, but their incestuous relationship with the Bush White House and extremist groups within the United States that their own investigative jouranlists began homing in on.

As in Britain, this investigation will be limited to a few victims.  The broader involvements, hate mongering, propaganda and, most likely, broad espionage and blackmail as in Britain, is unlikely to ever be touched, not in American courts, not in American courts where judges are so very answerable to Mr. Murdoch and his powerful political machine.