Home Government Can Libya Reap the Fruits of the Arab Spring? 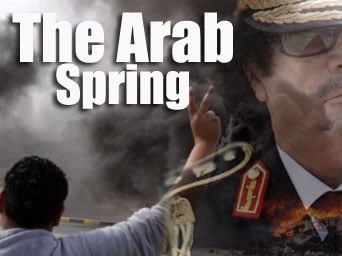 Just as Saddam Hussain portrayed himself as the new Salahuddin Ayyubi of the Arab world, Muammar Gaddafi projected himself as the new Omar Mukhtar of Libya. Salahuddin Ayyubi fought the marauding crusaders, and Omar Mukhtar fought the Italian invaders, whilst the Arab dictators spent their life oppressing their citizens and empowering their family and tribes. Is there any comparison between the brave and heroic struggle undertaken by Omar Mukhtar, and Gaddafi’s cowardly acts of oppressing and killing Libyan citizens over the last forty years? The world only caught a glimpse of Gaddafi’s reign of horror through the shocking events in Benghazi that ignited the people of Libya to overthrow the regime.

Colonel Gaddafi has always been the Arab Idi Amin, an eccentric clown to the outside world, and a cruel monster when dealing with his opponents. As the rebels close in on Gaddafi, Moussa Ibrahim, the spokesman for Gaddafi, is beginning to sound like Ali al-Sahhaf, better known as comical Ali, for his lurid and absurd claims. Gaddafi’s superficial rhetoric belongs to the 70s, when the government-controlled media was the primary source of information, but the world has moved on, you cannot fool this Facebook generation; they are technologically savvy with instant access to information from numerous sources.

It is technology, the will power of the oppressed masses and the assistance provided by NATO that has bought success for the Libyan freedom fighters. This has definitely provided another much needed boost to the Arab Spring, especially lifting the spirits of the brave and resilient people of Syria fighting the Alawite tyrant. Despite the early start in Tunisia and Egypt, they have yet to deliver a stable government elected by the masses. If the National Transition Council (NTC) led by Mustafa Abdul Jalil succeeds to form a new government, based on free and fair elections, and manages to bring about political stability that could inspire and start the domino effect in Tunisia, Egypt, Morocco, Algeria and the rest of the Arab world, marking the second-phase of the Arab Spring.

Hence the question: what are the main obstacles to achieving political stability in Libya?

Fortunately, Libya does not have any sectarian issue as the nation is mainly Sunni, but it has tribal feuds and past grievances from the 40 years of oppressive rule. After the recent events, it would be a safe bet to assume that Gaddafi and his family are unlikely to return to power. However, resistance might prolong from his tribal members. No doubt, the NTC are reaching out to members of Gaddafi’s tribe to join the leadership to neutralise this primitive tribal allegiance. Indeed, overcoming this primitive tribal affiliation and building a sense of nationhood, where Libyans see themselves as equal citizens, will be a real challenge for the new regime.

There have already been some reservation expressed about the NTC, and the elected government that succeeds through it, because it might comprise of people from the old regime who switched sides to mitigate their past crimes; if they have blood on their hands, they should stand trial with Gaddafi. Concurrently, there should be the utmost effort to avoid creating an atmosphere of vengeance, which would isolate and prolong resistance from Gaddafi’s tribes and supporters. To the credit of the NTC and the freedom fighters, this has been avoided so far, but its early days. What Libya needs is a new start, therefore, fresh elections should ensure that only those people with clean hands are contesting for power.

The political framework desired by the Arab masses in general is clear; a powerful legislative body, an independent judiciary with an executive body whose power is limited. They want a stable constitutional government that is accountable, where the rule of law prevails, providing opportunities based on merit rather than tribal affiliation and bribery. The Arab masses want to trade their dictators for freedom. However, freedom does not equate to Western values; will the West endorse the genuine notion of freedom which would permit the people of Libya to ‘choose’ their government and the values which they represent?

It seems the politicians in the west may have recognised, or have been forced to accept, that long term trade through a genuine representative government is far better than short term gains acquired through nasty dictators. The freedom to ‘choose’ may mean an Islamic orientated government rather than a militant secular one. In reality, the actual government formed is likely to be a moderate secular regime which carries Islamic influences, naturally as Libya is predominantly a Muslim nation. The government would have a mandate based on a constitution that incorporates Islamic values.

With political stability in oil-rich Libya, economic progress would follow, and wealth would trickle down to the neighbours; Libya, with a small population, needs the labour force from its neighbours to boost the economy. The economic injection might transform North Africa, which in turn could revive the African continent as a whole: finally delivering the fruits of the Arab Spring. A revived Arab world may also help to provide some economic stimulus to Europe, whose economy has been slowing down and heading towards another recession