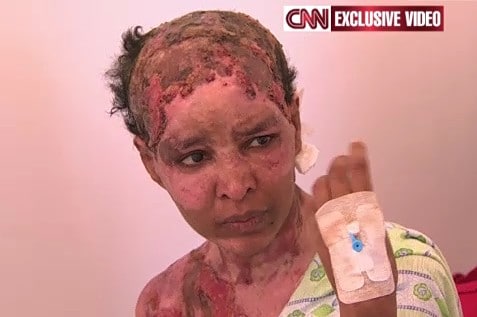 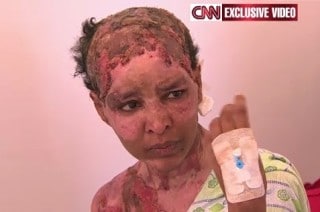 The woman on the right, whose freed from the Gaddafi family hours before outlines torture at the hands of the wife of Gaddafi’s son, Hannibal.  Hannibal and wife, a long infamous “gruesome duo,” known for abusing hotel staff, servants, anyone they could get their hands on, tortured this woman for days.

However, “wingnuts” of the conspiracy press are claiming rebels secretly captured her, inflicted these injuries and tortured her to force her to tell these “lies” to CNN.

No story is too wild, no conspiracy too “tin foil hat” for the Gaddafi “wingnut parade” to spam the internet with.

As time goes on, we move past the lists being compiled to turn over to Amnesty International, journalists and bloggers, who have supported these crimes.  We now have evidence out of Lebanon showing “Palestinian” organizations funded by Gaddafi to have been managed by Israel.  Both Gaddafi and Israel, for some unknown reason, are at war with Hezbollah.

Now “humanitarian” groups that used to spy on Hezbollah in Lebanon are also helping furnish support in the “wingnut” press for Gaddafi and his war crimes.

Some of these organizations have been active in recruiting activists to speak and write against UN efforts against the now defunct Gaddafi regime.

Yesterday, these same bloggers now claimed that African mercenaries, contracted for by Gaddafi were being abused by their captors who are part of the new Liyban government.

“Wingnuts” assume everyone is as stupid as they are.  In some cases, they are right.

We have redefined “wingnut.”

Libyan’s search for documents inside Abu Salim prison, in Tripoli, Libya, Saturday, Aug. 27, 2011, Libya’s most notorious prison of Gadhafi’s regime and the scene of a 1996 massacre of prisoners.
Concerns are growing about the fate of nearly 50,000 people that were arrested by forces loyal to Libyan fugitive ruler Muammar Gaddafi over recent months.

“The number of people arrested over the past months is estimated at between 57,000 and 60,000,” said Col Ahmed Omar Bani, a spokesman for revolutionary forces, in a news conference in Benghazi.

The revolutionaries’ spokesman added that between 10,000 and 11,000 detainees have been released, state-run BBC reported on Sunday.

It is likely that those who are unaccounted for are being held in underground bunkers in Tripoli, according to revolutionary fighters.

Bani said “it would be catastrophic if it turns out” that those missing prisoners have been killed.

Many revolutionaries and their supporters were arrested by regime forces during the battle for Benghazi and other cities, reports said.

A lot of the activists and even those suspected of involvement in anti-regime protests were detained in an effort to prevent the wave of revolution from reaching the capital, Gaddafi’s stronghold.

There are some individuals with information about detainees in Tripoli and revolutionary forces are now searching for them, Bani said.

“It is high time those who claimed to have been too frightened to speak to come forward and testify about the crimes which were being committed,” the spokesman said.

At least 200 decomposed bodies of men, women and children were found in Abu Salim hospital on Saturday. The people, some still alive when admitted to the hospital, were abandoned by doctors and nurses amid intensified fighting.

Amnesty International reports that it has received evidence showing that dozens of detainees were killed by Gaddafi loyalists in two military camps on August 23 and 24.

Charred skeletons of about 50 people were found Saturday in a makeshift prison next to a military base in Salaheddin, a suburb located five kilometers south of Tripoli, after the facility fell to the fighters’ control.

[Editors Note…JimDean:] The charred bodies were removed from this horror seen today. The count is 153 now. They had been told they were going to be released.