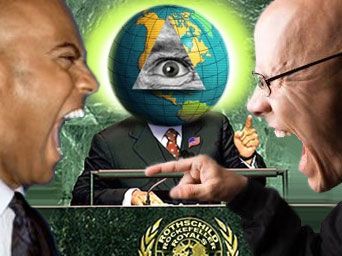 As we approach the 10 year anniversary of the global catastrophe known as 9/11, Americans are becoming more and more skeptical about what’s really going on and why things have happened the way they did and continue on today.

In fact, in watching the “news” over the last decade post 9/11, American citizens have been increasingly getting more and more frustrated by the events turning against them and their governments lack of ability to take action on their behalf.  Most ask “What the hell is going on?”.  And for most, nobody seems to have a logical answer that makes cents.

I mean we see it everywhere, everyday, and in every town and city in America. The anger is boiling over and most Americans continue to vent everywhere but in the direction of the culprit.

Now for all those partisans out there who are reading this, please note that devotees of both the Republican and Democrat parties are blaming one another and neither has it right.  A misdirection has been played upon Americans by the real culprits.

Of course, each devotee thinks the problem is the other guy and so, for the globalists, he’s enjoying every moment as the door to the hen house is always open.

In my view, all Americans are being played by a Fiddler on the Roof.  Unfortunately most Americans can’t see this global minstrel dancing on their heads because they are too busy buying the dirty pitch sold to them by the globalist PR machine.

Having said this reality, the real game has been and continues to be played without any interference from the farmed peasants known as the American public.

Yes, you heard what I said “Farmed!” Farmed like you’d farm a cow, sheep or chicken.  You feed the animal and when it gets fat you milk it.  Then, when you’re hungry, you misdirect it to the slaughter house and then kill it for meat hopefully leaving its offspring behind for the next round of gluttony.

Ok so while these farmed Nationalists cut each other’s throats the Globalists play on like Jimmy Page in a never ending rendition of Stairway to Heaven.  Dream on and play that fiddle Jimmah!

Ok so while American citizens get hammered losing their collective standards of living, the privileged few play the global money power games complete with their “Go USA Flag” pins on their lapels dishing out rhetoric only a loyal lovely neck from Alabama could love whilst they rape the towns, cities, counties, and states blind making trillions off war, banking, and resource mongering worldwide.

For them, there is NO RECESSION.  I repeat!  NO RECESSION!  Get it!  They make trillions no matter what while you scream the “Go USA” mantra and own more debt, more war, more killings and more servitude.

Oh and the bad news is that this has been going on for years. I hate to break it to you but this situation is NOTHING new!

The only thing that has changed over the last 10 years is that an increasing number of us in the mental diaspora of peasantville have had access to information via the internet that was once never available to us.  The internet has given us access to information from the past and so we can study and then also find new sources of information and put two and two together so that we come to know the real matrix where we live.

Think of it this way…once upon a time people thought the world was flat and that if you crossed that horizon, you’d fall into a ditch with dragons.  Yep, and believing otherwise was cause for a hanging!

Well guess what?  This nationalism thing is our horizon and the globalists don’t want you to see that the ditch is not really there!

You see they live in different matrix than us. They don’t buy into the old idea of Nationalism and have not in hundreds of years.  But we do don’t we?  Of course we do…and that is how the they thrive.  When the peasants buy-in they got it made in the shade. With the buy-in they thrive and keep us, the peasantry, farmed and under control.

For them the USA is nothing but a farm; a place they can pick their fruits and eat at their daily bacchanal.  Of course once this global pig eats all of it, it just goes to the next trough.  It matters now what “nation” the trough is in or what language it speaks.  They eat whatever they can wherever they can.  There is no religion to it.  There is no national conscience.  That’s only for our consumption.

If you think the rulers that govern the G.W. Bush or Barack Obama administrations or the US Congress for that matter are American citizens who will fight for this country, then you have your lovely nationalist head in the globalist sand.

But when we learn and accept this reality then we know the human farm and thus can escape the human farm.  So it becomes all clear now.

It’s not the Republicans who are the problem.  It’s the Democrats either!  It’s the Nationalists vs. the Globalists and the Globalists are winning right now because the public has it’s collective eyes wide shut.

Now when the public opens it’s eyes then the question becomes “Now What?”

Do we call for revolution against this force or do we stop wasting our time fighting them and join the global movement?  It really is a tough call for most of us who are conditioned to love nationalism right?

Okay so go ahead and watch the globalist news posing as American news.  Do you see the ruse now?  And then check out how your politicians behave; all of them!  Do you see the fake?

When we know the strings being pulled then we can see the puppets for what they are.

So maybe we ought to stop bashing poor ole G.W. Bush or Barack Obama. These guys control NOTHING!  Come on, stop buying this line of non-cents.  I mean once we realize that we’re just the idiot in the audience who paid the $ 3.50 for a ticket to the matinee then we actually see the real show behind the curtain and then, it is up to us whether we stay or go.

If we stay, okay, let us hope they let us afford the popcorn and soda.  If not, then welcome to freedom but be ready, the globalists won’t go quietly into the long dark night!