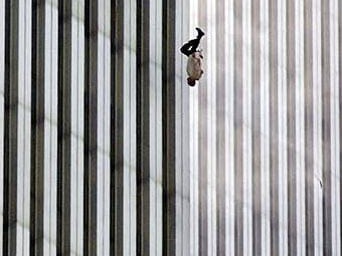 Jonathan Briley was the falling man of 9/11 and one of 200 jumpers who leaped to their deaths on that infamous day in 2001. His image captured by Richard Drew continues to shock and it demands the truth and justice for those who perpetrated or allowed this treasonous false flag operation and carefully orchestrated cover up to occur.

The most despicable act of American treason was the 9/11 false flag operation and carefully orchestrated cover up which continues to this day.

The Obama administration is determined to keep this bamboozle covered up and is, as such, complicit in hiding the truth of 9/11.

But nothing captures the sheer horror of that day more graphically than Richard Drew’s photo of the falling man ~ later identified as Jonathan Briley. See story ~

The New York Post last year published a 9/11 macabre human remains map in trying to determine the physical scope of ground Zero as well as the human deaths, which obviously includes the over 200 Trade Tower jumpers along with  the falling man, Jonathan Briley.

This New York post map is a graphic illustration of the human cost of that day for each red dot  is a human being who was loved and cherished by someone and became an unnecessary victim of the most treasonous act in American history.

It was Carl Sagan who wrote ~ ” One of the saddest lessons of history is this: If we’ve been bamboozled long enough, we tend to reject any evidence of the bamboozle. We’re no longer interested in finding out the truth. The bamboozle has captured us. It is simply too painful to acknowledge ~ even to ourselves ~ that we’ve been so credulous. So the old bamboozles tend to persist as the new bamboozles rise.”

The 9/11 cover up is America’s greatest bamboozle and many Americans are apparently no longer interested in finding the truth ~ for it would indeed be too painful to acknowledge.

If even the 9/11 Commissioners don’t buy the official story, why do you?

If even our country’s top intelligence officers don’t buy the official story, why do you?

If top government officials are skeptical, why aren’t you?

Numerous other politicians, judges, legal scholars, and attorneys also question at least some aspects of the government’s version of 9/11. See evidence ~

David Ray Griffin, perhaps the leading scholar in the 9/11 Truth movement, made a plausible case in July in a 183-footnote open letter    for the view that “Among scientists and professionals in the relevant fields who have studied the evidence, the weight of scientific and professional opinion is now overwhelmingly on the side of the 9/11 Truth Movement.”

And finally, all the misinformation that became the 9/11 official story was laid down by the US news media within minutes after the attack. Here’s the ten minute Video with those complete details:

Every abuse of power by the Cheney/Bush administration can be traced to the 9/11 false flag operation and cover up and we, as a nation, will not be free until we fully investigate, uncover the evidence and prosecute the perpetuators of America’s greatest bamboozle ~ no matter how difficult it may be to acknowledge this evil deed.

It was Schopenhauer who wrote ~ “The truth passes through three stages: First, it is ridiculed ~ Second, it is violently opposed and Third, it is accepted as being self-evident.”

In that regard, the recent self-serving, deceptive and revisionist history books by Donald Rumsfeld and Dick Cheney should be reminders to all Americans that the first casualty of war, and in particular illegal pre-emptive wars based on lies, is the truth.