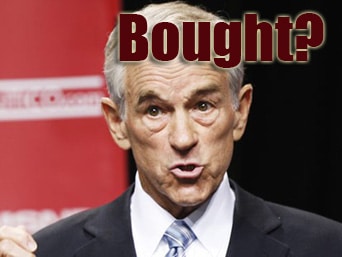 Bruce Fein: It Boils Down to ‘Principle’

Final: The Facts, Bruce Fein, Ron Paul, and the Next Step

Today is Day 7 on the campaign to raise awareness and alert re Bruce Fein, the greatest threat to the Ron Paul Camp to date. It may be my last one depending on the public response and feedback we receive from the already active and vigilant ‘true’ Paul supporters. I am going to start with one last response to Bruce-Mattie Fein agents who have hijacked several websites to deflect attention from the facts and the real issues. If you go and read the propaganda written by the Feins’ agents you’ll see why I refer to them as ‘agents.’ Either due to certain omega fatty acid deficiencies or natural genetic misfortune, these guys slip and make clear their close associations with both Bruce and Mattie Fein. Now, allow me to provide you with a concrete rebuttal to some of this misinformation that is being spread and planted by Feins’ agents:

“So what if he is representing foreign agents, foreign governments or foreign groups. He is an attorney after all, and it is his job to represent these people?”

“The Lichfield Group features unrivalled government, media, and business experience. Exemplary is the Group’s high level connections with the Department of Justice, the Department of State, and the Central Intelligence Agency, on the one hand, to The New York Times, The Washington Times, The Wall Street Journal, and nationwide broadcast or cable networks on the other.

Whether a client is a giant corporation handcuffed by ill-conceived United States government policies or a foreign government anxious to influence the decisions of Congress, the President, agencies, the judiciary, or State governments, The Lichfield Group is armed with the skills and contacts indispensable for success.”

Just to show my generosity and kindness towards the IQ-challenged Fein agents I am going to recap: Bruce Fein is a foreign agent-lobbyist and that has nothing to do with ‘legal representation.’ He represents foreign agendas before the CIA, the State Department, the Congress, and the White House… Courts ain’t got nothing to do with this in-name-only ‘attorney.’ Where did you guys ever hear of cases being brought before the despicable Central Intelligence Agency-CIA?! What exactly are this Bruce Fein’s ties and close connections to the CIA and State Department he keeps bra

“Bruce Fein is a fine attorney. Regardless of his shady foreign ties and businesses, as the Chief Legal Advisor to Ron Paul Campaign he is bringing his highly regarded attorney expertise and services!”

As I am writing this piece, as has been the case since the ruling issued by the Congressional Ethics Committee, there is a fine group of legal experts who are working on getting the Bar Association to investigate and hopefully suspend Mr. Fein’s attorney license. This is a gigantic public scandal, not an allegation, people:

“In a statement released on August 5, the House Ethics Committee ruled that Rep Jean Schmidt has received multiple improper gifts totaling $500,000 from the Turkish Coalition of America (TCA) between 2008 and 2010. The Committee ruled that Schmidt must pay the money back, However, she will not face sanctions by the House as she was able to pin the blame for her behavior on her attorneys Bruce Fein and David Saltzman.”

After investigating the case, the Ethics Committee says it was Bruce Fein who intentionally misled his client Rep. Schmidt and funneled half a million dollars of foreign lobby money to the Congresswoman. As I stated before, there are only two possible scenarios here:

His two possible explanations for this case would be: 1- I did not tell my client that my legal representation of her case was part of foreign lobby money funneling to her; 2- My client was fully aware of the foreign lobby bribery nature of my

legal representation and services, but to protect her and my foreign bosses I took the blame. Under either explanation one glaring point remains clear, and that is the lack of ethics on behalf of the involved attorney-Bruce Fein.

Feins’ agents are out there trying to persuade the Paul Camp to ‘forget Fein’s foreign lobbyist status and businesses’; that ‘you’ve got a darn good attorney as your chief legal advisor.’ It is not any of my ‘allegations’ they are countering here; it is the official findings by the House Ethics Committee. How is it going to look for Ron Paul and his supporters if and when it is announced that Bruce Fein is being barred from legal practice due to unethical practices as an attorney?! Who is going to defend Ron Paul for picking this kind of an attorney for this kind of high-official position?! What will the public say? The presidential candidate who picked a crusty foreign lobbyist and a barred attorney as his chief legal advisor?!

I did not have to invent Bruce Fein’s Foreign Lobbyist status. It is in Mr. Fein’s resume and his past and present practices, showcased by him right here. Mr. Fein’s intimate associations with the CIA, the State Department and the White House are not based on any allegations; it is in his resume as written by him. Mr. Fein’s position and membership in the Neocon Nest AEI is a fact that is highlighted and used by him when needed. The ruling on Mr. Fein’s foreign lobby money funneling scheme is not some rumor; it is in an official congressional report. And finally, it is very hard for me to believe that the propaganda, misinformation and personal attacks on me recently could possibly be coming from any ‘true’ Ron Paul supporter. We are talking about libertarians, and libertarian-leaning people who refuse to stop the critical thinking process and readily summit to any authority. Take a look at the following propaganda example from the Daily Paul website, and tell me if this jibes with the Paul Camp motto:

Since when do Ron Paul people advocate for a monarchy-kingdom where followers must follow their king/leader blindly without question? This is disgusting. A disgrace to any libertarian minded person! Here is another one:

“An adviser may not be central in the campaign, and could be there to simply “bolster the appearance of the management team”, just like they do with company investment portfolios. It even might be for the purpose of gaining some acceptance from neocons by having the AEI adviser, even though RP is not neocon oriented and might not even take any advice from him. In the end, I have to consider RP to be capable of making these decisions. He is experienced and may have some reasons and knowledge that we do not see.” – Big T Wed, 08/31/2011 – 12:25.

What are these people saying? It is totally okay if Ron Paul hired this guy in order to expand his base to include neocons?

Okay, I am not going to waste my time with mind-boggling quotes attacking me personally, advocating a dictatorship style following, planting misinformation, and most importantly attributing all that to Ron Paul supporters. Instead, here is my message to all in the ‘true’ Paul Grassroots network: It is okay to think highly of Bruce Fein’s speeches-writings on State Secrets Privilege and some First Amendment related topics. I’ve read some of those, and I happen to like the content. Fein has been in and around the Paul Camp, giving speeches and interviews since 2008. I had no problem with that. Have the man, pay the man, to write and publish articles. That’s fine. But do NOT let this man inside as a strategically positioned insider. Do not let this man become Ron Paul’s Chief Legal Advisor. A crusty foreign lobbyist, an unethical attorney involved in money-laundering-funneling for foreign agents, a CIA-State Department Insider, a known AEI Neocon, a covert Israel supporter, a man who has been playing all sides-from the ACLU to AEI to Turkey to Pakistan to Israel to Ron Paul…Well, that kind of man has NO place in the Ron Paul campaign as an insider, and has no place with Ron Paul. I believe I have said and done my part for now. I have been in this particular fight for way too long. Causes to fight for have not decreased but increased. I believed this to be one of those causes worth fighting for, including taking vicious attacks and insults from Paul imposters. However, the decision is now yours to make and the next step is yours to take. In the end, it all boils down to sincerity and principle. Please let me know, and until then.