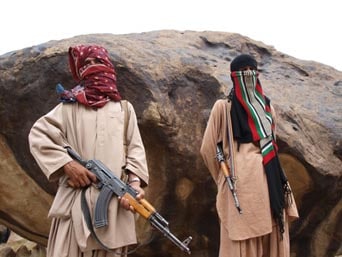 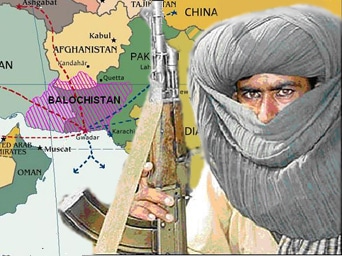 Balochistan has figured high on the agenda of USA because of its geo-strategic importance. Former USSR too had toyed with the idea of Balochistan getting separated and coming under its influence since it provided the shortest route to warm waters. KGB along with RAW and KHAD had supported insurgency in Balochistan from 1973 to 1977. Landlocked Afghanistan too evinced interest in Balochistan and always welcomed dissident Baloch Sardars and gave them asylum. Currently USA and its close allies are eying at Balochistan and Central Asian-Caspian Sea mineral resources.

The hungry eyes of USA are transfixed on the hidden treasures of Balochistan, laden with oil, gas, coal, black diamond, gold, silver, copper, zinc and precious stones. Reportedly, the province has 19 trillion cubic feet of natural gas reserve and 6 trillion barrels of oil reserve. Huge quantity of gold and copper found in Riqo Deq in Chaghai region has watered the mouths of several foreign companies and are desperate to clinch the mining deal.

Like USA, India too has deep interest in Balochistan. RAW had established contacts in this province in early 1970s and had played a significant role in Marri-Mengal led 1973 insurgency. Taking advantage of its closeness with USA, India is anxious to keep Pakistan deprived and draw maximum benefits from Central Asian markets. While it is overly eager to gain land route through Pakistan’s Wagah border to Afghanistan and Central Asia, it is striving hard to destabilize and possibly detach Balochistan from Pakistan so that the economic activity generated by USA in Central Asia doesn’t benefit Pakistan. It established 26 consulates/intelligence offices along Balochistan border in Afghanistan. Indian consulate in Zahidan was also Balochistan specific.

If one browses the US official website (US Citizenship & Immigration Service), one finds a form showing Balochistan as a separate state. Several US officials and US media have been projecting Balochistan as an independent and sovereign state and have circulated map of a truncated Pakistan minus Balochistan, FATA and Khyber Pakhtunkhwa. In some maps Jinnahpur has also been shown. The US think tanks have been propagating creation of Greater Balochistan, which includes Sistan province of Iran.

CIA and MI-6, later joined by RAW and Mossad bribed and induced the Baloch Sardars of Bugti, Marri and Mengal tribes in 2002 and promised them all out support to make Balochistan a self-governing state. They were advised to keep airing their grievances about greater political rights, autonomy and control over natural resources and at an opportune time launch armed insurgency. All arrangements for funneling funds, weapons and equipment from Afghanistan, India and Zahidan and setting up training camps in interior Balochistan for training of rebels as well as communication network were tied up.  60 Farari (training) camps were setup in interior Balochistan to destabilize the province.

The three dissident Baloch Sardars together with nationalist insurgent groups are up in arms since 2004. Insurgency picked up momentum after the death of Nawab Akbar Bugti on 26 August 2006. He is lionized by the Balochis as a hero for having sacrificed his life for the sake of Baloch cause. Insurgency has now taken the shape of a separatist movement. After the death of Balach Marri, Akbar Bugti’s nephew Brahamdagh Bugti leading Baloch Republican Army (BRA), took up the mantle and continued launching terrorists from Afghanistan under the patronage of RAAM and RAW. He is now based in Switzerland and is patronized by USA and India. He openly claims that he had been receiving assistance from India and Afghanistan. He has requested US to stop aid to Pak Army so that it is unable to take action against Baloch rebels seeking independence.

Escapees Harbyar Marri and Khan of Kalat Mir Suleiman located in London are sheltered by Britain. Harbyar has been given political asylum despite being declared an absconder and involved in anti-state activities. Wahid Baloch, President Baloch Society of North America stated that Balochis loved Indian friends and wanted them to rescue the Balochis from the tyranny and oppression of Pak government. B. Raman, a former RAW agent wrote to Sonia Gandhi that struggle for independent Balochistan was part of unfinished agenda of partition. So-called government of Balochistan in exile is setup in Jerusalem in World Baloch Jewish Alliance Building and Mir Azad Khan Baloch is general secretary.

Militant organizations such as Baloch Liberation Army (BLA) under Harbyar, BRA, Baloch Liberation Front (BLF) under Dr Allah Nazar and Lashkar-e-Balochistan banned by Pakistan are materially and financially funded by CIA, RAW, MI-6, RAAM and Mossad to keep Balochistan destabilized through acts of sabotage and subversion. BLA alone receives Rupees 50-90 million per month from CIA to meet its expenses. Once majority of Farari camps were destroyed by security forces, members of these groups were imparted training in Afghanistan by Indian military trainers in dozens of training camps. These groups are involved in target killings of settlers, pro-Pakistan nationalist leaders and political activists, kidnappings, extra judicial killings and bomb blasts. Runaway terrorists taking part in subversive activities in Balochistan are projected as missing persons and the Army and intelligence agencies blamed for it by Human Rights.

While Baloch inhabited parts including Quetta are restive, Pashtun regions of the province have by and large remained peaceful. Pashtuns in Balochistan have played no role in Baloch insurgency, nor have shown any signs of separatist tendency. In fact they are a big check on Baloch separatists. Failing to win them over, Sanaullah Baloch, a nationalist Baloch leader seeking right of self determination for Balochistan in frustration had sounded threat of Talibanization in certain parts of Balochistan in early 2010. Two military operations in neighboring Helmand province by US-UK forces were launched with an eye on southwestern Balochistan to make it restless. The US wish to start drone war in Pashtun inhabited areas under the pretext of targeting Taliban and al-Qaeda leaders is also meant to foment militancy in that part and then develop alignment between Baloch and Pashtun militants. Demand put in by ANP for a separate province for Pashtuns in Balochistan could also be a sinister move to serve foreign agenda.

Indo-US-western powers are coaxing the rebel leaders in exile and nationalist leaders not to accept lucrative Balochistan package, development of Gwadar deep seaport and other mega projects, construction of military cantonments in Gwadar, Sui and Kohlu, grant of provincial autonomy and amnesty to exiled leaders since in their view all these are tricks to enslave the Balochis. They are instigating them to remain steadfast on single point agenda of independence and to continue airing grievances. They are deceptively led up the garden path that the oil, gas and mineral resources would be theirs to enjoy.

In order to help the cause of separatists, terrorist activities against Frontier Corps (FC) convoys and posts, gas pipelines, electric grids and pylons, bridges, railway tracks and trains, together with target killings and kidnappings for ransom by BLA and BRA terrorists are never objected to by USA, western world, paid NGOs and human rights organization led by Zohra Yusaf, Asma Jahangir, Hina Jilani and IA Rahman. The HRCP has recently issued a concocted report on Balochistan mainly to malign the Army. It is being wrongly projected that the Army is conducting military operation in Balochistan and involved in abduction and extra judicial killings, and that the Baloch are being victimized.

HRCP has made no mention of blatant interference of foreign agencies in Balochistan, or the sufferings of non-Baloch at the hands of Baloch rebels, and the perverse role of nationalists injecting hatred into the minds of the youths, burning of national flag, disallowing flying of Pakistani flag and singing of national anthem in schools and colleges located within Baloch dominated areas and systematic poisoning of minds of the Baloch youth and women in Balochistan against Punjab and Army.

Balochistan security situation is effectively being handled by the FC since late 2006 and FC is controlled by Ministry of Interior. The Army confined to cantonments is extending a helping hand in development works only. Notwithstanding that the three planned military cantonments in interior Balochistan would have contributed a great deal towards uplift of the surrounding regions; the project has been shelved to honor the sentiments of the Baloch. Sui and Gwadar are being turned into education cities where Amy Medical College and modern schools are being opened. Baloch youth are joining armed forces and paramilitary forces in big numbers and significant numbers are being adjusted in government jobs. These are positive signs but a cause of frustration for anti-Pakistan Baloch nationalists. While the Army is doing its bit to win over people of Balochistan, the politicians are taking things easy and are not seized with the gravity of the situation in Balochistan where foreign powers have made deep inroads and have dangerous designs.

About the writer: Asif Haroon  is a retired Brig, a columnist and a defence analyst. Email: [email protected]