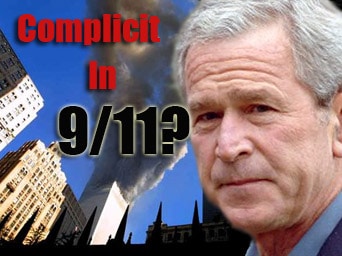 Was President George W. Bush complicit in the 9/11 attacks? That’s a question that will not go away on this 10th anniversary of those terrible events.

If many people continue to wonder about it, perhaps it’s because the Bush regime did not call for a prompt investigation into 9/11 and subsequently obstructed its work. There is a fresh report that some information turned up by the FBI in Florida was held back on direct orders from Mr. Bush.

To begin with, as Philip Shenon reported in The New York Times of July 9, 2003, “The federal commission investigating the Sept. 11 terror attacks said today that its work was being hampered by the failure of the executive branch agencies, especially the Pentagon and the Justice Department, to respond quickly to requests for documents and testimony.”

He wrote the panel’s chair and vice-chair released a statement “declaring that they had received only a small part of the millions of sensitive government documents they had requested from the executive branch.”

What’s more, Shenon pointed out, the Administration would not allow its officials to be interviewed “without the presence of government colleagues” so that the panel’s chairman suggested the situation amounted to “intimidation” of the witnesses. Why?

There’s ample evidence President Bush didn’t want a panel convened in the first place. As David Firestone reported in the Times of Nov. 15, 2002, the White House only yielded “to intense pressure from families of Sept. 11 victims” to create the panel. Firestone wrote that Senator John McCain, the Arizona Republican, “had fought zealously for the commission for months, leveling bitter criticism at the White House for stalling it…”

Of course, Bush’s opposition to the panel is zero proof that he was involved in the 9/11 attacks in any way. He may have only wished to cover up the incompetence of his government’s response to them. Writing in The Times on Feb. 4, 2008, Evan Thomas pointed out, “The official ineptitude uncovered by the commission is shocking.”

Questions about Bush’s appointments to the 9/11 panel are more than troubling. Bush initially named former Secretary of State Henry Kissinger chairman of the 9/11 probe—a man whose consulting firm it turned out had done work for the bin Laden family! What a coincidence, right?

When Kissinger hurriedly resigned, Bush named former New Jersey Gov. Thomas Kean in his place. Michel Chossudovsky of Global Research pointed out that Kean “sits on the board of directors of a company which has business dealings with financier Khalid bin Mahfouz.” Kean, it turns out, was a director of Amerada Hess Corp., involved in a joint venture with Delta Oil of Saudi Arabia, an outfit owned in part by Mahfouz—a man whose sister is married to Osama bin Laden! Another coincidence, of course.

Chossudovsky writes, “Carefully documented by (Washington reporter) Wayne Madsen, George W. Bush also had dealings with Osama’s brother-in-law (bin Mahfouz,) when he was in the Texas oil business” and both Bush and bin-Mahfouz were implicated in the Bank of Commerce International scandal.”

Americans are right to be skeptical of Bush’s motives when the two chairmen he names to the 9/11 panel are linked to the bin Laden family. They are also right to be skeptical of the 9/11 Commission Report. As David Ray Griffin noted in his “Debunking 9/11 Debunking”(Olive Branch Press), a Zogby poll taken in May, 2006, indicated that 42% of the American people believed that “the U.S. government and its 9/11 Commission concealed…critical evidence that contradicts their official explanation of the September 11th attacks.” And a Scripps/Ohio University poll in August, 2006, showed 36% of the public believes “federal officials either participated in the attacks on the World Trade Center and the Pentagon or took no action to stop them “because they wanted the United States to go to war in the Middle East.”

A new report in the Miami Herald of September 8, states that “The final 28-page of the (official) Inquiry’s report, which deals with “sources of foreign support for some of the Sept. 11 hijackers,” was entirely blanked out. It was kept secret from the public on the orders of former President George W. Bush and is still withheld to this day, (former U.S. Senator Bob) Graham (D-Fla.)said. This new information was provided by Anthony Summers, co-author of “The Eleventh Day: The Full Story of 9/11 & Osama bin Laden” and Don Christensen, editor of the online “Broward Bulldog.”

Kept from the public until now is information that a Saudi family who abruptly vacated their Sarasota, Fla., home two weeks before 9/11, “were visited by vehicles used by the hijackers” and who were in telephone communication with those “who carried out the death flights—including leader Mohamed Atta.” The information was unearthed by the FBI. Graham stated further that FBI information unearthed in California linking Saudis to 9/11 was never turned over to the 9/11 Commission , either, until Congressional investigators found it on their own.

If President Bush was honored for his probity and integrity, one might argue there is no reason today to inquire into suspicions that he was complicit in the 9/11 attacks or concealed vital information about them. Yet, as subsequent events revealed, the man lied the nation into destructive wars that killed more than a million people, and who confided in a friendly journalist before entering the White House that he planned as president to make war on Iraq’s Saddam Hussein—and who later used 9/11 as the excuse to do it.

Was George W. Bush complicit in the 9/11 attacks? That’s a question that deserves further investigation.

Sherwood Ross formerly worked as a reporter for major dailies and as a columnist for wire services. Today he directs the Anti-War News Service as well as a global-reach public relations firm “for good causes.” Contact him at [email protected]