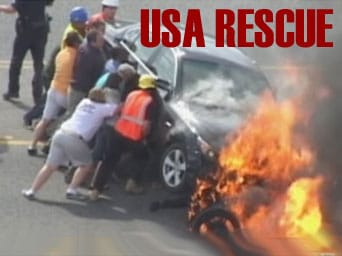 Can “We The People” Save Ourselves From the Global Elite?

In comic books, superheroes are often depicted as lone wolves, but in a horrifying car-motorcycle crash in Logan, Utah on Monday, heroes came in bunches.

Looking like a cross section of America — hard-hat construction workers, a businessman, a woman in skirt and sandals and a man dressed for leisure in t-shirt and shorts — an ad-hoc rescue team assembled in seconds to free 21-year-old Brandon Wright as he lay trapped beneath a burning BMW on a city street.

Incredibly clear video of the rescue was captured by an office worker in a nearby building.  Check it out….

And so it got me thinking.  Is this what America needs?  A collective rescue by the proverbial village people?

With the Global Elite Congress posing as a Peoples Congress burning us like the man under the car, we need a rescue.  But there is no one hero.  There is no Captain America.  Just us, ja people standing around helpless while we watch the darn thing burn.

Are we going to lift the proverbial car off the burning flesh of our freedom, liberty, and once full of life democracy or are we going to continue to point fingers at one another while the globalist burn us to death?

It’s a question and the answer is forthcoming.