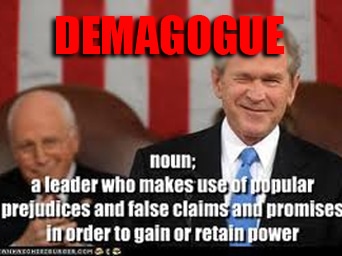 How Do Politicians Get People to Vote Against Their Own Interest?

I was watching the Republican debate the other night and it astounded me to see how many people were applauding proposed policies that would cut their throats. During the debates I watched people whose very lives are dependent on social security, applauding enthusiastically in support of the views of Rick Perry, Republican governor of Texas, a man who is on record as saying he believes that social security is unconstitutional. So how do politicians get people to vote against their own interest?

A classic example of the technique at work can be found in how the Republican Party manipulated the American people during the sixties. When you consider how methodically conservatives went about mounting their assault on the liberal agenda, you can’t help but recognize that it was a stroke of genius.

Ironically, the conservatives took the Democratic Party’s strength and made it a political liability. First they took the party’s penchant for being concerned with the plight of the downtrodden and coined phrases like “bleeding heart liberals” and “tax and spend Democrats.” They then played on the frustration of the middle class by tying civil rights legislation, welfare, and crime together as the source of middle class woes; then they attributed all of these problems to what they called the Democrat’s tendency to be ” bleeding heart liberals”. Once the connection was made between minorities, welfare, crime, and the liberal agenda, it was then just a matter of repeatedly hammering the message home. Thereafter, whenever they mentioned the word “liberal,” a sizable portion of the American people heard “minorities, welfare, and crime.”

So, by simply associating the word liberal with any policy or individual, that policy, or person, became toxic, because through extension, the public associated it or them with minorities, welfare, and crime. And the GOP has used this technique very effectively to play on their constituency’s prejudices, and to whip them into a frenzy against their own interests.

The effectiveness of that campaign can still be seen today in the Tea Party. The primary reason that the GOP dubbed healthcare reform “Obamacare” was to play on the prejudices of their base. By calling it Obamacare it distracts their base from the recognition that healthcare reform is a policy that would not only benefit, but protect their families. Instead, all they’re thinking about is their hatred of Obama, and as a result, act against their own interests.

Demagogues within the Democratic Party has learned this technique well. Tavis Smiley and Cornel West have used that very same technique to undermine President Obama and to promote their own political agenda. When Cornel West decided to mount his attack on Obama, instead of addressing specific policies, which would have been the responsible thing to do, he started attacking Obama’s overall character by indicating that Obama was somehow uncomfortable with “free Black men,” and then went on to associate him with the
White power structure – “plutocrats and oligarchs.”

Just like the Republicans, West was attempting to circumvent the peoples’ minds, and appeal directly to their emotions and the negative attitudes that Black people and many White liberals harbor toward the White power elite. That way, instead of having to substantiate his claims, all he’d have to do thereafter was use buzz words like “oligarchs” and “plutocrats” to stir the people’s emotions.

But you can always see these people coming and identify who they are by asking yourself one simple question – is this person appealing to my ability to think, or simply trying to inflame my emotions?

If you’ll notice, neither the GOP nor Smiley and West ever have any positive ideas to add to the political debate. All they ever talk about is what they don’t like. They never offer any alternative suggestions on how the current policy can be improved. Everything they do or say is designed to provoke anger and hostility, because rational thought is their enemy.

The GOP doesn’t want to discuss the pros and cons of healthcare reform. All they want to do is attack it as an overall policy that’s “un-American.” They’ll say something like, “Obamacare is un-America. The liberals are engaged is a socialist plot to protect your family.”

The same is true of Smiley and West. Instead of addressing specific policies or how they can be improved, all they want to talk about is why Obama is no good – and when interviewed, they speak in gross generalities, and the fact that they haven’t been invited to the White House will invariably be mentioned. But we have yet to hear them discuss anything concrete. If you don’t like President Obama, who should we run instead? They don’t want to address these sort of issues, because that might get the people thinking again.

So as Americans, if we ever want to improve our current condition, it is incumbent upon us to do a lot less feeling, and a whole lot more thinking.

Eric L. Wattree
http://wattree.blogspot.com/[email protected]
Citizens Against Reckless Middle-Class Abuse (CARMA)Religious bigotry: It’s not
that I hate everyone who doesn’t look, think, and act like me – it’s just that
God does.