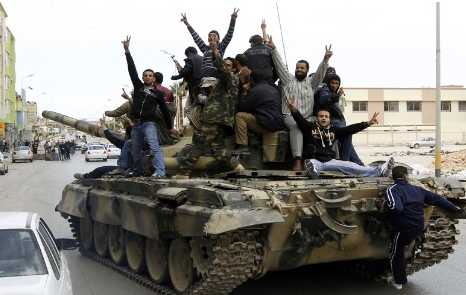 The emphatic collapse of Gaddafi’s supposedly die-hard fighters as the rebels converged on Tripoli was an exact re-run of how the Northern Alliance militias swept into Kabul unopposed by the Taliban militants who evaporated into thin air. In Libya, as in Afghanistan, the USA and Nato Air Force played a pivotal, if not, the decisive role in demolishing Gaddafi’s forces ability and more significantly, its will to stand its ground and put up a fight. Likewise, in Iraq, Saddam’s elite forces spectacularly failed to put up any resistance as the USA forces literally marched into Baghdad.

The Libyan popular uprising was initially authentic and home-grown, reflecting the Libyan people genuine desire to break free from Gaddafi’s 42 years of brutal dictatorship. It was inspired by Egypt’s and Tunisia’s popular uprisings. Although it started peacefully, it swiftly turned into an armed struggle due to Gaddafi’s ferocious crack down. It was also Gaddafi’s chilling threat, that he would slaughter Benghazi’s people, that strengthened the hands of both Cameron, the British PM, and Sarkozy, the French president, in their strenuous attempts in the UN to impose a no-fly-zone on Libya. Resolution 1973, however, was much more effective as it ultimately gave Nato a freehand to do whatever it takes to protect civilians under threat. Despite Russia’s accusations to Nato of overstepping its mandate, Nato, nonetheless continued to utilise the resolution to pursue its own agenda, which was not merely protecting civilians, but ultimately regime change.

The USA and Nato have learned three important lessons from its disastrous intervention, particularly in Iraq. Firstly, to obtain the authority from the UN Security Council. Secondly, not to have any uniformed troops on the ground. And thirdly, never to impose a toothless no-fly-zone similar to the one that was enforced in southern Iraq.

Many senior politicians and military officials in the West have repeatedly emphasised that the most critical mistake of disbanding the Iraqi army will be avoided in Libya. While in the case of Libya disbanding the army would be wrong, since Gaddafi himself marginalised it and depended on his notorious battalions, while in Iraq, ever since 1935, the army’s top ranks were dominated by the Sunni minority and was constantly used as an effective instrument of suppression against the Shia majority as well as the Kurds. In 1968, when the Baathists came to power, Saddam, personally oversaw the purge of all non-Baathist officers, replacing them only by loyal Baathists. Therefore, while it was certainly not a mistake to disband the entire top ranks of the Iraqi army, however, it was a mistake to disband the conscripts in the army.

The National Transitional Council (NTC) is getting the ringing endorsement as Libya’s legitimate government, but on the internal front its legitimacy and authority has been brought increasingly into question by deep concern over the growing tensions between the arch rivals, the Islamic conservatives and the secular groups, as they jostle for power. In his first speech in Tripoli, Mustafa Abdul Jalil, the NTC leader, seemed to be struggling to maintain the peace between the two powerful rivals and at the same time he strived to reassure the west that Libya will not adopt an extremist ideology. Moreover, Abdul Jalil’s ill-conceived assertion that the NTC’s headquarter would not be moved to Tripoli before the complete liberation of Libya, have not only deeply undermined confidence in the NTC, but also played into Gaddafi’s hands. The NTC’s credibility suffered a severe blow, when both, Saif Al-Islam and Mohammed, Gaddafi’s sons, appeared free and defiant after the rebels announced their capture. It was, however, the cold-blooded murder of the NTC’s military commander, Abdel Fatah Younes, in Benghazi at the hands of an extremist Islamist faction of the rebels that cast serious doubts about the NTC’s ability to function as a unified force.

Nato and the USA Relentless and extensive intervention is undoubtedly the fatal mistake recommitted in Libya. The statements made by Cameron, Sarkozy and Feltman, USA Assistant Secretary of State, from Tripoli, vowing to continue such intervention underscores that Nato and the USA have not learned from their experiences in Iraq and Afghanistan, not to repeat this monumental mistake. This experience, however, confirms that excessive intervention not only severely undermines the authority and the power of the new regime, but more ominously, strips it of its legitimacy in the eyes of its own people at the very time when it is most vulnerable and desperately struggling to establish its position, thus inadvertently turning it into a puppet regime and therefore, giving the perfect pretext for its opponents to galvanise support to resist it and ultimately topple it.

Nato and the USA have not just shot themselves in the foot, but also dramatically weakened the new rulers in Iraq, Afghanistan and now the Libyan NTC by intervening even during the most historic moments which mark a turning point. In Iraq, the toppling of Saddam’s statue, with its profound symbolic significance, should have been left to the Iraqis not the USA army. In Afghanistan, the USA air-force paved the way for the northern alliance to liberate Kabul from the Taliban. But, the USA unwillingness to step back scuppered a historic opportunity for the northern alliance to liberate Kandahar, Afghanistan’s second city and the power base of the Taliban. In Libya, Nato and USA, have played the major role in defeating Gaddafi. Yet again, they wasted a golden opportunity to enable the rebels to claim ownership of the historic moment of breaching the high walls of Bab Al-Aziziya compound, Gaddafi’s power base, by bombing it from the air.

The ultimatum given to Gaddafi’s supporters in Bani Walid, Sebha and Sirte, the bastions of his support and his birth place, has apparently expired without hammering out a compromise. While Gaddafi’s die-hard supporters appear, so far, to be steadfastly resisting the rebels advance, nevertheless, it is inconceivable that they can withstand the relentless Nato blasting. Experience from, both Iraq and Afghanistan, however, shows that if Nato adopts its classical but futile approach of bringing about a swift, yet unsustainable end to the war by marginalising the rebels and bombing Gaddafi’s supporters, this approach will definitely enable him to portray himself as a hero and gain widespread sympathy and admiration in Libya and the Arab world. This is precisely what Gaddafi needs which is to spark an insurgency and thus drag the NTC into protracted guerrilla warfare. Although, the alternative new approach might require a longer time, but it would dramatically reduce the chances of the war flaring up again. But, in order for it to succeed, Nato has to immediately stop acting as the rebel’s Air Force. It has to cease all of its air bombing operations and hand back the entire responsibility of liberating the remaining cities to the Libyan rebels. This would surely enable the rebels to restore ownership and regain the authenticity of their original popular uprising, but, above all, establish their own incontestable authority and indisputable legitimacy to be the rulers of the new Libya in their own right.