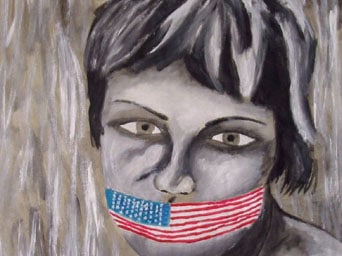 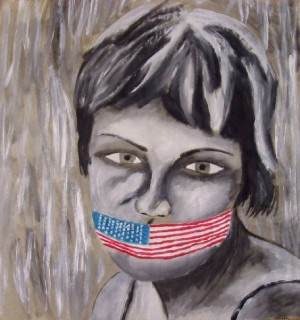 Mainstream media voices continue to talk about 9/11 as if thousands of intelligent researchers didn’t even exist!

These people might as well have duct tape over their mouths!

This past week the internet and mainstream media have both been chock-a-block with 9/11. But they haven’t been in the same world. The contrasting stories have been absolutely amazing.

TV and print media have both gone into expansive detail about the victims and the heroism of first responders–police, fire fighters and paramedics.

The stories cover moving, appropriate memorials to the dead and injured.

But then there’s the other world, which exists outside of the mainstream–the 9/11 truth seekers.

More moderate factions simply insist that top government officials know more about the attacks than they have acknowledged, and then used the attacks as a pretext for invading Iraq.

A large percentage of activists proffer–often in great detail–what they call inconsistencies in government explanations of the attacks, which many consider a governmental cover-up.

The most amazing thing about these two worlds is that one of them doesn’t even acknowledge that the other even exists.

Major newspapers like the New York Times, Washington Post, Wall Street Journal and major networks like MSNBC, ABC, CBS and CNN have knowledgeable reporters, researchers and anchors working for them.

They can’t possibly be so completely detached from the internet world and unaware of the truth seekers.  They act as if they don’t know the questions that have been raised or the findings that have been reported in the online world.

Mainstream media voices continue to talk about 9/11 as if thousands of intelligent researchers didn’t even exist!

These people might as well have duct tape over their mouths! What silenced the media people who use remarkable resources to dig up facts, evaluate them and make sound judgments about other issues?

It’s impossible to believe that mainstream commentators and their staffs have willingly buried their heads in the sand obliterating any honest investigation of the questions raised about 9/11.

How can they pretend to be honest anchors and programme hosts and not stay awake at night with guilt over what they have shoved under the carpet?

David Ray Griffin, Professor Emeritus, author of 11 books on 9/11 wrote, “All the proffered evidence that America was attacked by Muslims on 9/11, when subjected to critical scrutiny, appears to have been fabricated.”  Have our brilliant news anchors been oblivious to this?

Apparently the wealthy networks and publications haven’t used their vast resources to investigate the findings of more than 3000 professionals and experts who have questioned the official story.

The findings that follow come from The Wisdom Fund.

Lt. Col. Robert Bowman, PhD, Former Director of Advanced Space Programs Development said “Scholars and professionals . . . have established beyond any reasonable doubt that the official account of 9/11 is false and that the official ‘investigations’ have really been cover-up operations.”

The following have all found serious flaws in the Commission’s findings.

1500 plus architects and engineers; more than 250 pilots and aviation professionals; 400 plus professors, dedicated to research and teaching the truth; more than 300 survivors and family members; 200 plus artists, entertainers and media professionals.

A video released last week entitled AE 9/11Truth  Experts Speak Out provides the clearest analysis of the 9/11 attacks from professional architects and engineers. It is, without doubt, the best and most comprehensive film yet produced challenging the official version of the WTC attacks.  It’s also the appropriate antidote to the disinformation that continues to be pervasive in the US media.

The world of the mainstream media need not entertain flawed or questionable conspiracy theories. However, with their articulate anchors, investigative reporters and large staffs of producers and researchers, they have no excuse for wallowing in ignorance.

The major news organizations and networks need to get in tune with the cogent minds of scientists and credentialed professionals who have found legitimate flaws in the public accounts of 9/11.