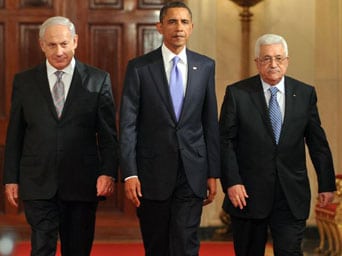 Those who monitor the Hebrew press and understand the Jewish State may be slightly puzzled to find out that while in the Hebrew press there is only just a little and insignificant attention to the current Palestinian leaders’ drive for statehood, the Israeli English media outlets are saturated with news about the prospect of a pro-Palestinian resolution in the UN next week.

If you want to understand this clear discrepancy between the Jewish Hebrew press and English outlets, then here it is–we are dealing here with a clear split within the Jewish collective psyche.

I guess that some may be surprised to learn that Israel and most Israelis actually want the Palestinian initiative to go ahead and to succeed. They want a Palestinian State because this is the only solution that would save the ‘Jews only State’ from a demographic meltdown.

Recent polls in Israel prove that the majority of Israelis are very excited about the ‘Two State Solution’. Not only are the Israelis not threatened by the idea of a Palestinian State, they actually love it, for It would settle their reality within a framework of international law. Also, you may want to bear in mind that Kadima party, that won the last two elections in Israel, has been and still is,  devoted to ‘disengagement’, a clear separation between the ‘Jews’ and the Palestinians by means of Israeli unilateral withdraw. In other words, a Palestinian statehood achieves the exact same goal; it removes Israelis from any responsibility to territories it once occupied and destroyed.  It is obvious that some elements in Israel oppose the Palestinian UN initiative: I guess that Foreign Minister Avigdor Lieberman is not too happy about it. West Bank settlers may also be very angry   but for some reason, even they are relatively quiet these days.

And yet, the Jewish Lobby around the world totally opposes the Palestinian UN initiative: it clearly holds a very simplistic image of an expansionist Jewish State from the ‘river to the sea’. And as it seems, it is not going to give up on its dream very soon.

What we see here in practice is a clear identity crisis or even a schizophrenic counter flow of aspirations between the Israeli and the Diaspora Zionist.  While the Israelis are reverting to the old Jewish Ghetto attitude, they prefer to shrink, stay together and surround themselves with vast and impenetrable concrete walls, the Diaspora Zionist Jewish narrative is confrontational, belligerent, hawkish militant and expansionist. They want it all, with the Palestinians or without them.

Once again we notice that Israel and Zionism have evolved into two separate and opposing discourses. While Israel is seeking to maintain its racially oriented identity through politics of segregation, the Diaspora Zionist discourse is still insisting on solving the Jewish Question by the means of a conflict with no end.

But let us for a moment look at America; let’s try to understand how the world’s ‘single superpower’ is handling this Judeo-centric schizophrenic apparatus.

President Obama and his administration are obviously very confused. On the one hand, they are subject to some relentless pressure inflicted by the Jewish lobby. The Lobby doesn’t leave the American administration with much room to manoeuvre. But on the other hand, both American administration and Israeli Government do realise that, as far as Israel and its ‘security’ are concerned, the Palestinian UN initiative is not such a bad idea at all.  In fact, Israel cannot pray for more than that.

It is clear by now that President Obama is not going to be saved by any of the so- called ‘America’s best friends’. For AIPAC and the Lobby, Obama is an instrument. By now the Lobby is used to regarding American politicians as their subservient puppets. Israel, on the other hand, is not going to save America either. It is too suspicious of the current administration. Israel is basically tired of the current American Administration. It will be happy to see Obama beaten.

Consequently, the American Administration is heading towards an inevitable humiliation in the UN. It will have to veto a decision voted for by many of America’s allies.  This is clearly a disaster for Obama. And yet, one man can save America from its doomed fate. This man is no other than the Palestinian President Mahmoud Abbas. Only Abbas and the PA can let America off the hook.

But the meaning of it all is also very embarrassing. It means that the Palestinian President Abbas (who is a relatively weak figure in Palestinian politics as well as in international diplomacy) is the only person who can save our world’s ‘single superpower’ from a   diplomatic fiasco.

I cannot make up my mind whether this is funny or sad, but let me tell you, it is certainly volatile.

The time is certainly right for America, Britain and the West to find the strength to oppose Zionist Lobbying and the power of Jerusalem.

You can now pre-order Gilad Atzmon’s New Book on Amazon.com  or Amazon.co.uk