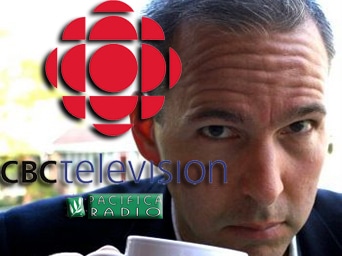 Public Broadcasters Disgraced as Agents of the 9/11 Cover-Up.

(LETHRIDGE, Alberta) – Pacifica and the Canadian Broadcasting Corporation have joined forces in featuring Jonathan Kay in 9/11/11 coverage aimed at renewing the psychological warfare essential to the invasions, torture, Genocide, illegal occupations and Islamophobia characterizing the 9/11 wars.

Jonathan Kay was a featured guest highlighted in the network coverage of the tenth anniversary of 9/11 as broadcast by both Pacifica Radio in the United States and the English-language radio division of the Canadian Broadcasting Corporation. Kay wrote for Rupert Murdoch’s News Corporation a hate-inspired, tenth-anniversary text claiming that those engaged in seeking answers for the copious unanswered questions concerning 9/11 are engaged in “absolving” all Muslims collectively of a “terrible crime.” (p. 167)

Kay’s diatribe was funded by a prominent Israeli-based think tank whose leadership comes largely from the Project for the New American Century. PNAC is the think tank which observed in 2000 that its ambitious program of military expansion and invasions could not be met without a “catalyzing event” like a new Pearl Harbor. Entitled Among the Truthers, Kay diverts attention away from the evidence of what did and did not happen on 9/11. Instead Kay appoints himself as a psycho-anthropologist in pursuit of what this war promoter and Isamophobe describes as “the growing conspiracist underground.”

In his 9/11/11 coverage Michael Enright, host of CBC Radio’s flag ship show, Sunday Morning, demeaned on air his old colleague, Barrie Zwicker. Zwicker and Enright worked together for many years as reporters at The Globe and Mail, the main competitor in Canada of Kay’s National Post. Zwicker is the author of Towers of Deception: The Media Cover-Up of 9/11. As his wonkey subtitle proclaims, Kay equates even the most accomplished of those engaged in the quest for 9/11 truth, investigators like Zwicker as well as Professor David Ray Griffin, with “Birthers, Armageddonites, Vaccine Hysterics, Hollywood Know-Nothings and Internet Addicts.”

Aged 77, the fit, mentally-agile Zwicker was a guest earlier today on Michael Enright’s program. The struggling host could not come anywhere close to keeping up with Zwicker. Instead Enright displayed an ignorance of his subject matter unbefitting of a broadcaster holding a high level of public trust in Canada’s Crown-owned agency. Like the CBC, the Pacifica stations in the United States have frequently featured Kay as an expert commentator on 9/11. While the CBC did not broach the subject of 9/11 skepticism in its 9/11/11 coverage, at least Pacifica did include in its tenth-anniversary broadcast the perspectives of, for instance, architect Richard Gage and University of Copenhagen Chemistry Professor, Niels Harrit. Both educators are highly critical of the official conspiracy theory of 9/11.

SallieMae is a cruel mistress

The Herald News – Joliet (IL) July 28, 2005 | Bill Wimbiscus Sending the kids away to college has been a real education. Our oldest, Kate, is moving to Chicago next week to finish what was to be her last but is now turning into her second to last year at Columbia College. I had no idea it was going to be such a huge pain in the ACTs. College is supposed to be about education, experience and career development. And beer. I figured parental involvement would be limited to saying NO to out-of-state schools, coed dorm floors and useless majors. And to writing checks. Lots and lots of checks.

Turns out I was wrong on all counts.

The kid stayed in-state, at home and out of journalism. She snagged a JuCo scholarship for her first year and a work scholarship for her second. Her third year, her first at a nonlocal college — i.e. fall 2004 to spring 2005 — was to be covered by federal low-interest loans and unattainable grants.

It was around this time last year that I was first introduced to the dominatrix/bureaucracy known as SallieMae, the place you go to plead for government-sponsored loans and nonexistent federal grants for college.

SallieMae is on the cutting edge of technology. You and your kid, if you’re ever home at the same time, can fill out all the relevant information over the Internet in the course of an evening. go to website free grant money

It’s kind of tricky the first time through. But when SallieMae’s computer assures you that everything is OK, you actually believe her. Apparently this is only meant to lull you into a false sense of well-being in preparation for your journey through the World of Red Tape.

Part of the problem is that there are some parts of the application that only the kid can fill out. This in itself is fraught with peril. And disappointment for the prospective student. The dialogue between Your Kid (YK) and SallieMae (appropriately initialed SM) goes something like this:

SM: Are you interested in free grant money? YK: Yes. SM: No, there is no grant money for you. I know it’s hard to believe, but your parents make too much money. How about a loan? YK: OK … SM: Sorry, you have no credit. No loan for you. Would you like to have a loan co-signed by your parents? YK: OK, I guess … SM: OK. Well, we can’t do anything unless you have a PIN number. Go to this link for your PIN number. (Kid hits link, system locks up). YK (now crying): Mom!

The student and her mom then repeat this process two or three times until they get through, file an “electronic signature” and are assured that the PIN number will be mailed out within five working days.

Ten days later, with PIN in hand, student, Mom and Dad attempt to apply again. Kid has finished her part, SallieMae computer assures her. SM: We’ll mail you a document to sign within five days.

Parents begin their part. Boy, SallieMae sure wants to know a lot of personal information. Income. Mortgage. Credit cards. Other expenses. Sure you don’t have any other income? After a couple of hours the application is completed. SallieMae assures us that we will be sent a document to sign. SM: And if you have any questions or want to check on the status of loan, you can use our handy Internet system.

Documents arrive in the mail sometime later. They get dumped in a pile of bills. Two weeks pass, parents discover their document, sign it and mail it back. Dad (to kid): Did you sign your SallieMae document yet? YK: Yeah, I think so. Dad: Well, go look online and check with SallieMae. YK (goes on computer): They want a PIN number. Dad: So? Put in the PIN number. YK: I don’t have it anymore. I threw it out. go to website free grant money

The kid then has to reapply for a PIN, which arrives a few days later. SallieMae assures her that it has everything they need. Weeks pass. A bill arrives in the mail from the college.

College: We want our money. We haven’t received anything yet. And until we get it you can forget about signing up for spring classes which, by the way, are filling up fast.

Now, this is where things start to get complicated.

Dad calls the college. Dad: Hasn’t SallieMae given you the money yet? College: What money? Sorry, I need to put you on hold. Ten minutes pass. College: Hello, how may I help you? Repeat process. College: You need to call SallieMae.

So you call SallieMae. After 10 minutes of computer prompts, a human being, more or less, answers the phone. Dad: How come you haven’t sent my kid’s college the money yet? SM: What money? Sorry, I need to put you hold. Ten minutes pass. SM: Hello, how may I help you?

To make a long story short, fall became spring. We finally got the loans for both semesters straightened out in May, just in time to prevent the kid from early sign-up for fall 2005 classes.

Two days ago, Kate got a letter in the mail from SallieMae. It contained a check for seven grand in it. We have no idea why.

I’m hoping maybe it’s one of those nonexistent federal grants.

Bill Wimbiscus is managing editor of The Herald News.