Home Veterans Why America Needs To Dismantle Its Security Apparatus 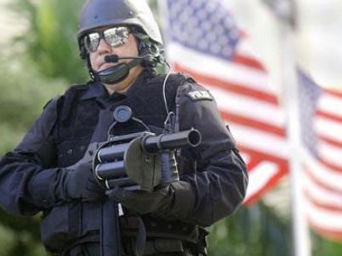 The best way for America to become more secure may well be to dismantle its vast security apparatus. This means eliminating the Department of Homeland Security, closing down our 800 military bases on foreign soil, and slashing armaments spending by the War Department, the one euphemistically called the Department of Defense but which is, in fact, the spearhead of today’s naked American aggression in six countries. Real security begins with creating a policy of peace, meaning non-intervention, in the affairs of other states. It means when the U.S. sends its sons and daughters abroad on official business, it sends the Peace Corps to help and not the Pentagon to obliterate. It means returning to the lost arts of diplomacy, restoring the State Department to its original relevance; it means scrapping the posture of arrogance that is known as American exceptionalism and not acting as the self-appointed policeman of the world; and it means settling disputes with other nations in the World Court, not on the battlefield; and lastly, and not the least, it means having the courage to put some trust in the organization to keep the peace in whose creation America played so large a role in founding, the United Nations.

“We are not the policeman of mankind,” syndicated columnist Walter Lippmann once remarked. “We are not able to run the world and we shouldn’t pretend that we can. Let us tend to our own business, which is great enough as it is.” This complemented the words of founder Thomas Paine, who wrote in “The American Crisis”, “Not a place on earth might be so happy as America. Her situation is remote from all the wrangling world, and she has nothing to do but to trade with them.”

In the last century, no less an authority on international affairs than George Kennan urged, “the first (concept) to go should be self-idealization and the search for absolutes in world affairs: for absolute security, absolute amity, absolute harmony.” In today’s America, the search for absolute security has assumed hysterical proportions, with DHS officials everywhere checking up on everybody, “probable cause” be damned, at airports and bus terminals and train stations. It has made every citizen the object of Federal suspicion and denied to 100,000 the right to board an airplane. Communist Russia’s Nikolai Lenin would have cheered this invasion of individual privacy, as he once said, “It is true that liberty is precious—so precious that it must be rationed.” Under Communism, the rights of the individual were ever subordinated to the State, and that is increasingly true of America today.

In today’s America, the Pentagon, which consumes 54 cents of every tax dollar, reigns supreme, making a mockery of President Truman’s words, “If there is one basic element in our Constitution, it is civilian control of the military.” Truman’s staff feared that concentrating all military offices under one roof might create an ogre and that nightmare has become reality. As James Carroll remarks in his “House of War”(Houghton Mifflin): “Secretary of War Henry Stimson, saw the new danger at once and warned of it, to no avail. After Stimson, dozens of others would sound alarms as the Pentagon usurped controls over the levers of the American economy and culture, over science, academia, and politics.” Or as the poet Robert Browning wrote, “A man in armor is his armor’s slave.”

Truman remains the tragic example of how the quest for military supremacy actually undermines a nation’s security, rather than strengthens it. By creating at Hiroshima an horrific precedent to use atomic warfare (to cut the Pacific war short by a few months) he triggered a nuclear arms race spanning more than a half century that has spread around the world so that all humanity now lives in the shadow of the nuclear terror. “We have grasped the mystery of the atom and rejected the Sermon on the Mount,” reflected America’s prescient World War Two General Omar Bradley. Truman’s decision to A-bomb Hiroshima haunts Americans who fear the nuclear weapon may now be used against their own cities. This is the same fear that haunts the populations of Pakistan and India and other peoples who see local disputes escalating into nuclear infernos. And the senseless manufacture of these weapons by the tens of thousands, weapons that are rotting uselessly in U.S. arsenals around the world, weapons whose very testing has poisoned the atmosphere, has cost American taxpayers many trillions of dollars that could have been far better spent in energizing the civilian economy. In the last analysis, America’s Soviet Cold War enemy was brought down not by the Pentagon but by a visionary Pope and a humble Polish labor leader.

The agonies endured by foreign peoples by the establishment of U.S. military bases on their soil (287 in Germany alone) has rarely touched the conscience of the American people. How much better off would the world be today if the U.S. in 1946 had not evicted the residents of Bikini atoll in the Marshall Islands to test 20 nuclear bombs, making that island paradise uninhabitable and poisoning the world’s atmosphere? Okinawans are furious that the U.S. is using its best real estate for military bases and by overwhelming majorities tell pollsters they want an end to it. And what tragedy is greater than the fate of the Chagossian inhabitants of Diego Garcia in the Indian Ocean who in 1971 were summarily evicted from their island paradise for the establishment of an air base from which the Pentagon could attack the Middle East and whose dogs were taken from them and gassed before their eyes? In nearby Puerto Rico, the U.S. Navy used the island of Vieques as a bombing range and quit in 2003 only after non-violent protests hampered naval maneuvers and public opinion shamed the admirals. The utter absence of any regard for these and other innocent peoples is reason enough to change the name of Washington, D.C., to one that will not disgrace the memory of our nation’s first president. After all, it was Washington who said, “Observe good faith and justice toward all nations. Cultivate peace and harmony with all.”

At the root of America’s insecurity is Washington’s aggressive foreign policy to control the oil resources of the the Middle East and the world. Measured in the profit margins of the great oil companies, this policy has been a triumph, even if American motorists suffer at the pump. Also, control of the Middle East was instrumental, in another of President Truman’s historic blunders, in helping create the state of Israel on the soil of a people who had done the world Jewish community no injury, as had the Germans under Hitler, and who have since been degraded into second-class citizens in their own land, and worse, in Gaza today into the sort of ghettoized population reminiscent of Polish Jewry in Warsaw in the early stages of the Nazi occupation. The rise of Middle Eastern terrorism had nothing to do, as claimed by President Bush, with their jealousy of our freedoms but with our meddling in their region, including the overthrow of the elected government of Iran in 1953 by the CIA and the subsequent arrest, torture, and murder there of thousands of innocent Iranians. It is this policy of banal greed to feed the coffers of the major oil companies and the Pentagon’s “defense” contractors that is making America a target of violence and that needs to be ended.

Some constructive steps would be the termination of the world’s largest and best funded crime syndicate, the Central Intelligence Agency; the closure of all U.S. foreign bases; the elimination of our nuclear and germ warfare arsenals; the immediate withdrawal of U.S. forces now fighting in Iraq, Pakistan, Afghanistan, Yemen, Somalia and Libya; an end to the training by the Pentagon of foreign police forces; an end to its roles as the world’s No. 1 arms peddler and the world’s No. 1 jailer; a massive reduction of military spending by about 90 percent for starters and a hefty increase in Peace Corps spending as well as for humanitarian rescue operations in Africa and elsewhere. The U.S. must also have the courage to give up its veto in the Security Council and to recall the words of President Kennedy who said the UN is “the only true alternative to war.” As President Truman pointed out in one of his finer moments upon taking office, “The responsibility of the great states is to serve and not to dominate the world.” If you think that the foregoing suggestions are naive, ask yourself where the “realists” have gotten America today.

Sherwood Ross is a Miami-based public relations consultant for “good causes” who also writes on political and military topics. Reach him at [email protected].