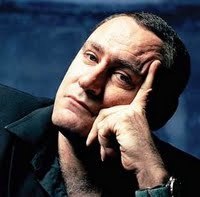 Some Palestinian solidarity campaigners are excited this morning about Rabbi Eric Yoffie’s pearls of wisdom. The outgoing President of the Union for Reform Judaism, wrote in a recent blog post for the Jerusalem Post:

People who understand the full extent of Jewish tribalism shouldn’t be taken by surprise. Rabbi Yoffie is genuine and coherent. Consequently, his support of The Two State solution is consistent with his Jewish belief system.

“Without a two-state solution.” Says Rabbi Yoffie, “Israel will not longer be a state for my group; it will be a bi-national state without a clear Jewish identity. That is not the kind of place where I, or most Israeli Jews, will want to live.”

As a supporter of the One State Solution I myself explored this exact issue at the Stuttgart One Democratic State Conference last year.

Needless to say, that the five German ‘progressive’ Jews who attended the  conference insisted on my removal from the Conference’s protocol.

I believe that truth must be said – there is a clear unfortunate discrepancy between Jewish Ideology and the One State Solution. This discrepancy must be addressed rather than be swept under the carpet.

Sadly enough, Judeo centrism and racial orientation is inherent to any form of Jewish political setting. It isn’t just the Zionists,  Israelis and the odd Rabbi who wants to live in a mono-cultural ghetto.

The Jewish Left follows exactly the same problematic mantra. J-BIG, for instance, is a UK  ‘Jews only’ Israeli boycott campaign.  For some reason they operate as a Judeo-centric  segregated group apart from the general BDS movement.   The International Jewish Anti Zionist Network (IJAN) would also take into their ranks activists who are ethnically and racially qualified. Like Rabbi Yoffie they claim to care about humankind, but somehow, they probably ‘love their own group a bit more.’  They are just slightly ‘more comfortable with them’.

A few months ago, the progressive blogger Philip Weiss wrote to me:  “I believe that all people act out of self-interest. And Jews who define themselves at some level as Jews — like myself for instance — are concerned with a Jewish self-interest. Which in my case is: an end to Zionism.  A theory of political life based on altruism or concern for victims purely is doomed to fail.”

So here we are, many Jews believe in Zionism, a few Jews believe that Zionism is actually ‘bad for the Jews’ (as opposed to bad for humanity or the Palestinians).  But all Jews who identify themselves politically as Jews act out of ‘Jewish self interests. They all prefer to operate in ‘Jews only cells’  I guess that this is the true practical meaning of ‘choseness’.

As it stands, universalism, humanism and altruism are still foreign to Jewish culture and Jewish political thinking. Those amongst us who dream of peace in the Middle East better address this crucial issue and find an adequate solution. As far as I can tell, this is a grave problem. Also, as long as progressive Jews keep  operating  in ‘Jews only’  political cells, they won’t be part of a solution but just another aspect of the problem.

Gilad Atzmon’s New Book is available on Amazon.com  or Amazon.co.uk