1.   VA Holds True to Families…It is their decision not Organizations.  The US Department of Veterans Affairs holds true to families and settles a lawsuit that accused VA officials of religious censorship at Houston National Cemetery, Veterans of Foreign Wars District 4 and Houston National Memorial Ladies will resign their positions as official VA volunteers. …
2.   NJ providing $195K to help train veterans in construction trades.  newjerseynewsroom.com  The effort is part of Helmets to Hardhats a national program jointly created by the US Department of Veteran Affairs and the national AFL-CIO to help National Guard, reserve, retired and transitioning active-duty military members connect to quality …
3.   County commissioner candidates propose vet center.  The Times Herald  The planned center would work in conjunction with the Montgomery County Office of Veterans Affairs and US Department of Veterans Affairs in Norristown. Richards envisions a public-private partnership to fund a well-staffed center estimated to cost …
4.   Fitch to Take Rating Actions on Oregon Dept of Veterans’ Affairs.  MarketWatch  Fitch Ratings will downgrade the short-term rating assigned to the Oregon Department of Veterans’ Affairs (ODVA) series 83, 84 and 90B (the bonds) to ‘F1’ from ‘F1+’ and …
5.   Senators blast rise in GI Bill funds going to for-profit colleges.  For-profit colleges aggressively targeting student veterans doubled and in some cases nearly tripled the amount of GI Bill funding they took in last year, a trend lawmakers called disturbing and potentially predatory.
6.   Mullen blames Pakistan for Haqqani attacks on U.S. troops in Afghanistan.  Pakistan’s intelligence service directly aided the terrorist Haqqani network’s recent wave of attacks against U.S. servicemembers and other targets in Afghanistan, Chairman of the Joint Chiefs of Staff Adm. Mike Mullen said Thursday.
7.   Retreats aim to put ‘together’ back into marriages.  The weekend trip to Verona, Italy, for Valentine’s Day this year recharged the DeCortes’ marriage, they said.
8.   Navy extends sea duty for 60,000 sailors.  The change affects 36 ratings, with the sea time being increased from anywhere between six months and two years. Those scheduled to rotate to a new duty station before March 2012 will not have their projected rotation date adjusted
9.   Remains of bomber crew interred in Arlington.  The remains of nine servicemen, missing in action from World War II, were buried in a single casket Wednesday in Arlington National Cemetery, the Department of Defense announced.
10.  Soldiers Struggle For Jobs After Service. Washington Times  “Nationwide, unemployment among veterans is 8.3 percent according to the most complete statistics” from the US Bureau of Labor Statistics. In Maryland, the “rate is lower, around 5.7 percent, but the disorientation veterans feel transitioning from war to the work force is the same.” State officials “said Maryland has a lower veteran unemployment rate than national figures, in part because military base realignments have brought jobs to the state, and also because the government has focused programs and money on helping the state’s 13,000 unemployed veterans find careers.” 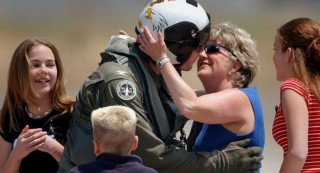 VA has launched a telephone service called Coaching into Care, which is a national phone service that links Veterans and their family members with benefits and services available in their communities. Read more at VAntage Point