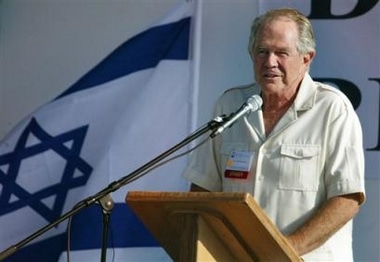 The son-of-a-senator, Pat Robertson, has demonstrated the power and success of the psychological warfare performed thousands of years ago by ancient Hebrew/Jews which is still working to this day.

Robertson has issued “an urgent call to prayer” and is asking all Christians to pray that the United Nations will turn down the Palestinian request to be recognized as a free and independent state. He really doesn’t need to do this since Obama will veto the request out of fear of losing Jewish support for his reelection. All U.S. politicians must please the Israel lobby or else suffer the consequences of losing large donations from Jewish donors and receiving bad media coverage since virtually all of “Americas” media is under Jewish control.

Robertson reveals he has bought into the Hebrew Bible/Old Testament nonsense/psychological warfare of Jewish superiority when he refers to the Jews as “God’s chosen people.” The French Deist, Voltaire, ridiculed the claim of the Jews being chosen by God “above all people that are upon the face of the Earth.” (Deuteronomy 7:6) Voltaire thought it was beneath the Supreme Intelligence to choose the Jews due to their lack of knowledge. Voltaire wrote in his essay Adam, “It is certain that the Jews had written and read very little; that they were profoundly ignorant of astronomy, geometry, geography, and physics; that they knew nothing of the history of other nations; and that it was only in Alexandria that they at last began to acquire some learning. Their language was a barbarous mixture of ancient Phoenician and corrupted Chaldee; it was so poor that several moods were wanting in the conjugation of their verbs.”

In his essay, Adam, Voltaire imagines a Jew telling the Roman Cicero and the Roman Senate that they, the Jews, were God’s chosen people and that they

knew all of humanity was descended from Adam and Eve. In Voltaire’s essay, the Jew also expounds on Noah and other fictional Bible characters. Voltaire then writes, “Cicero, would, doubtless, have inquired for the great monuments, the indisputable testimonies which Noah and his children had left of our common father. ‘After the deluge,’ he would have said, ‘the whole world would have resounded with the names of Adam and Noah, one the father, the other the restorer of every race. These names would have been in every mouth as soon as men could speak, on every parchment as soon as they could write, on the door of every house as soon as they could build, on every temple, on every statue. You mean to tell us that you knew so great a secret, yet concealed it from us?’  The Jew would have answered: ‘It is because we are pure and you are impure.’  The Roman senate would have laughed and the Jew would have been whipped. So much are men attached to their prejudices!”

After a laundry list of several instructions to give to God in their prayers, Robertson closes with more ancient psychological warfare when he ignorantly regurgitates what the Jews wrote themselves in the Old Testament, “God promises to bless those that bless His chosen people, and curse those who curse Israel.” Let’s join our faith in prayer at this critical hour, blessing Israel and asking God to intervene on her behalf.

It’s amazing that God gave us the gift of reason, yet, billions of people, in their efforts to follow God, turn their backs on their God-given reason in order to believe the unreasonable and ungodly teachings of their “holy” scriptures and “revealed” religions. As the American founder and Deist Thomas Paine wrote in The Age of Reason, The Complete Edition (for Kindle version click here), while addressing this topic of “revealed” religious people, “he despises the choicest gift of God to man, the GIFT OF REASON; and having endeavored to force upon himself the belief of a system against which reason revolts, he ungratefully calls it human reason, as if man could give reason to himself.”